A volunteer group famous for helping bushfire survivors and residents under lockdown in public housing towers is trying to raise $600,000 to build a new kitchen, and has been overwhelmed by the response.

In 24 hours since its appeal was launched on crowdfunding site GiveEasy, Sikh Volunteers Australia has raised over $110,000. 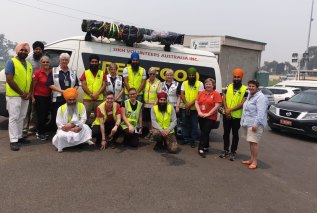 “The response is overwhelming,” said SVA vice-president Manpreet Singh. “We are so thankful to everyone,” he said.

SVA hands out freshly cooked meals from its van two nights a week in Frankston and Tooradin but the bigger kitchen will enable them to expand to Dandenong and Noble Park.

On Sundays, they deliver free food to single parents, the elderly, international students, the unemployed and the homeless to seven council areas including Kingston, Monash and Mornington. 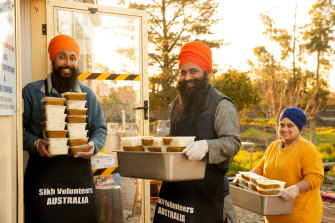 The new centre will also help SVA join forces with a local charity to supply meals for the homeless.

He said since the start of the COVID-19 pandemic, SVA had given over 180,000 free meals to people in 41 Melbourne suburbs and “we can’t keep up with demand”.

“We are currently significantly limited by the current kitchen facility that we have,” he said.

The SVA has purchased two adjacent factories in Cranbourne West — one to house a kitchen and one for storage.

Of the $1.4 million cost, $600,000 is being crowdfunded and the rest will be funded from loans and future fundraising.

Sikh Volunteers Australia’s food service was a familiar sight in East Gippsland towns such as Bairnsdale and Mallacoota during the Black Summer fires in 2019 and 2020.

SVA’s food service now has 300 volunteers from many cultures, who come from as far as Geelong.

Demand has surged during the pandemic. In a seven-day service between March and December 2020, SVA served about 142,000 meals, in six council areas.

Mr Singh said: “I think people can understand the importance of this service….that’s why they’re happy to support it.”

The Dees need to make changes. Is there a big trade in their future?