The Morrison government has moved to shut down any legal claim by Christine Holgate over her departure from Australia Post, insisting she resigned as chief executive of her own volition over the Cartier watches saga.

Ms Holgate has said she is contemplating taking legal action against Australia Post over her controversial exit in November, after alleging she was unlawfully stood down by the chairman amid pressure from the Prime Minister and his ministers. 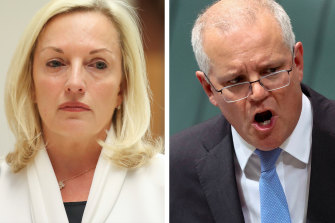 Prime Minister Scott Morrison rejected on Wednesday Ms Holgate’s claims he bullied her out of the job, saying she elected to resign during a government review into her 2018 decision to reward four senior executives with Cartier watches worth a total of $20,000.

“The position was that Christine Holgate would be able to stand aside while that review took place. She chose not just to do that. She chose while the review was under way to resign from the company,” Mr Morrison said.

Communications Minister Paul Fletcher, who has ministerial responsibility for Australia Post, said there was no factual question over whether she had resigned.

“What is very clear here is Ms Holgate has resigned. She issued a public statement saying she had resigned,” he told Sky News.

In explosive testimony to a Senate inquiry on Tuesday, Ms Holgate suggested she still considered herself employed by Australia Post.

“My contract has never been resolved and many people would know that on [my] LinkedIn it still says CEO of Australia Post,” she told the inquiry.

Ms Holgate appealed for an apology from Mr Morrison in a flurry of media appearances on Wednesday, saying his denunciation of her in the Parliament was “one of the worst acts of bullying I’ve ever witnessed” and the subsequent furore left her suicidal. In question time in October, Mr Morrison declared he was “appalled” by Ms Holgate’s actions and said she could “go” from Australia Post if she refused to stand aside for the inquiry into the gifts.

Mr Morrison said on Wednesday he regretted the distress his “strong language” caused Ms Holgate but refused to issue an apology. He said he remained of the view that the Cartier gifts were inappropriate and denied his treatment of her was sexist.

“It was not my intention to cause distress to Ms Holgate and I regret any distress that that strong language may have caused to her and indeed did cause to her. That was not my intention,” Mr Morrison said. “This was about taxpayer organisations handing out Cartier watches to well-paid executives. This has nothing to do with gender.”

The Morrison government has sought to shift the focus to the Opposition’s role in the watches saga. Mr Fletcher said the issue was uncovered last year via a “political hit job” by Labor senator Kimberly Kitching in a Senate estimates hearing.

“A Labor Senator asked a series of questions in Senate estimates about whether Ms Holgate had, as chief executive, authorised the provision of $20,000 worth of Cartier watches as gifts to four executives. And as a consequence, the events of that day unfolded,” Mr Fletcher told Sky News.

Opposition Leader Anthony Albanese, who condemned Ms Holgate’s actions at the time and said he supported her “paying a price”, has since scrambled to reframe Labor’s position.

On Wednesday, he defended his declaration in October that Ms Holgate’s position was “untenable”, saying the Prime Minister’s comments had made it so.

“He effectively sacked Christine Holgate on the floor of the Parliament,” Mr Albanese said. “After that answer, of course, how could she continue?.”

ST Podcast: Middlemarch, Middle-Earth and the end of the world