Home » Lifestyle » ‘She likes watching me’: A scaly soulmate in lockdown? Join the club

We all know about the cuddly pet pandemic that arrived hot on the heels of COVID-19, but what about the rush of reptiles that came slinking in behind them?

When you look at the rise in size of the lounges of lizards and the nests of snakes that were brought into Australian homes during the lockdowns, Cavoodles, Labradoodles and Ragdoll kittens can only shrink away, tails between their legs. 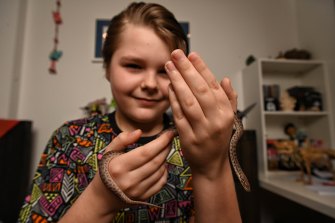 Jasper Smith, from Epping, and his children’s python, Zelda.Credit:Nick Moir

“I suppose a lot of people wouldn’t see snakes as cuddly, but they can be,” says 10-year-old Jasper Smith, who adopted his pet snake Zelda late last year. “They’re great to handle, and Zelda is so friendly and loves climbing up my hand.

“She’s so fascinating to watch, and she likes watching me too. When I do online schooling, she’s always so curious about what I’m doing. She’s a great companion.”

Jasper, who lives in Epping in Sydney’s north west, is just one of a growing gaggle of reptile owners championing scaly soulmates. He’s in excellent company, too. Latest figures from Animal Medicines Australia (AMA) show that over the last year, the number of Australian households with reptiles more than doubled, from 194,500 in 2019 to 426,400.

“The increase in the number of homes with reptiles has been very significant,” said AMA executive director Ben Stapley.

“While maybe some people mightn’t consider them as cute as puppies or kittens, attractiveness is in the eye of the beholder. A lot of people love keeping them as a hobby, while they’re great for teaching children responsibility and caring.”

Certainly Jasper has loved bonding with his non-venomous 60cm-long children’s python Zelda, even though she did give him a nip almost the first time he picked her up. “But I hardly felt it,” he protests. “She’s usually easy-going. She just lets you know if you do something wrong.”

Somewhat less keen is Jasper’s mum, Fiona, 48. She’s always had a fear of reptiles, and it still hasn’t quite gone away, despite her new family member.

“Jasper’s always championing the underdog, even if it’s something gruesome and creepy,” Fiona says. “But it is fascinating watching her feed, although it is disgusting too. At the moment, she eats baby mice which we buy frozen, but later on she’ll eat rats and quails. I’m not too keen on having rats in my freezer …” 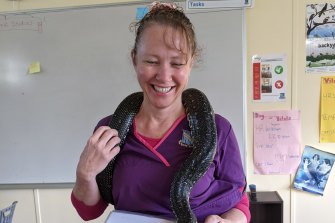 The appeal of reptiles might not be obvious to onlookers, but fans love how they’re pretty low-maintenance, needing to eat and have their tanks cleaned out only once a week. For apartment-dwellers, they don’t need much space, and they’re quiet enough not to annoy neighbours.

“Interest in them really exploded during COVID, and I’m amazed how many people are now wanting them,” says Ben, who warns that people should always buy them from reputable, licensed breeders and not from the illegal sellers who mostly, pre-COVID, bred or caught them to try and smuggle them overseas. 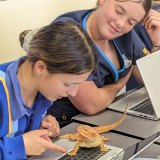 “They make brilliant pets. People these days are time-poor and they’re less demanding and easy to look after and, with their tanks, it’s like having a little slice of nature, or the desert, at home.”

When teacher Nicki Doyle discovered the animal studies course she was running at her high school in rural northern Melbourne also involved keeping some of them, she chose reptiles because she thought they wouldn’t need much looking after. “But I’ve found out they do,” she says. “But I don’t mind now as I’ve got so fond of them.”

In her classroom she now has a diamond python called Lucy, who’s just under three metres long, a Prince Regent northern blue-tongue lizard, two shingle-backed lizards and – her personal favourite who often comes home with her – Milo, the bearded dragon. Then there’s the crickets, the cockroaches, snails and mealworms she breeds to feed them.

“Milo is gorgeous with such a great personality,” says Nicki, 48, whose students, aged between 15 and 17, were often nervous at first, but now are completely besotted with the menagerie. “She’ll often snuggle into me for a cuddle. And you’ll regularly see kids coming in outside of lesson times to sling Lucy around their shoulders and take her out for a walk. We all love them!”