Self-funded retirees struggling to stay afloat have been urged by the federal government to tap into their home's equity to get through the recession.

Assistant Minister for Superannuation Jane Hume acknowledged self-funded retirees had taken a hit during the coronavirus pandemic from the combination of lower interest rates, reduced bank dividends, and a drop in rental income. 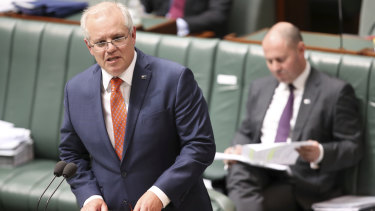 Prime Minister Scott Morrison has defended his budget against accusations it does little for women and older people, insisting it is for all Australians.Credit:Alex Ellinghausen

However, the federal budget did not include any additional measures to help them specifically.

When asked what self-funded retirees should do if they were struggling during the recession, Senator Hume suggested they look to the pension loan scheme, saying "the savings people have put into their family home" were part of the retirement income system.

The reverse mortgage-style scheme allows retirees to take out a loan from the government to cover living expenses, secured against their real estate, and receive payments of up to 1.5 times the pension rate. It was expanded last year to allow access by self-funded retirees, leading to a bigger take-up.

"That's a really innovative and very inexpensive way of adding to their income," Senator Hume said.

"I wouldn't be surprised … if it's something people turn their mind to now as another tool in the kit to help them through the most disruptive and uncertain part of managing their personal balance sheets during the pandemic."

Association of Independent Retirees president Wayne Strandquist said many older Australians would not consider the option.

"Retirees in general are quite reluctant to [tap] into their private residence to provide short-term cash flow," he said. Many saw it as affecting the inheritance they would leave, and there was an unwillingness to let the government have a lien on their estate.

Prime Minister Scott Morrison said those trying to pick losers from the budget were pitting groups against each other and undermining Australia's prosperity.

He defended his budget against accusations it did little for women and older workers.

"There will be voices that will try and set young people against older people, women against men, jobs in one sector versus jobs in another sector," Mr Morrison said.

"They are the voices of division that will undermine the future economic prosperity of all Australians."

Social Services Minister Anne Ruston said "every single measure in the budget is available for
women" and "women can take advantage of, you know, driving on the new infrastructure and roads".

The budget contained a new $4 billion hiring incentive for bosses to take on unemployed people aged under 35 in the next year.

Data from the Bureau of Statistics on Thursday showed the number of payroll jobs held by people under the age of 20 was 4.7 per cent higher in late September than it was in mid-March.

Mr Morrison pointed to an Abbott government wage subsidy program that offers up to $10,000 to employers who hire people aged over 50. In its 6½ years, it has supported 50,000 people.

There are 623,500 Australians aged 45 and older on JobSeeker unemployment payments.

"I support young people. I just don't see why you have to do that at the expense of older workers," Mr Albanese said.

EY chief economist Jo Masters said the budget was heavily focused on young people and jobs in male-dominated sectors with important decisions such as the size of the JobSeeker payment pushed off until later in the year.

She said there were would be substantial issues when the JobKeeper wage subsidy finished next year, with women at particular risk.

"What happens to the woman who is 36 years old and loses their job?" she said.

"We know young people are facing a tough situation and the government is helping them, but there's nothing for women in this budget for those who have lost their job or were out of work before this all started."

Labor released a women's budget statement on Thursday, casting a gender lens across the government's policies.

"Every economist will tell you that if you don't apply that lens and don't get a better outcome for women, not just women suffer, we all do," Mr Albanese said.

Pink Inspires With Her People's Champion Speech at 2019 People's Choice Awards: It Feels Good to Help

If Your Date Does Any Of These 6 Things, They're Probably Pulling A 'Slow Fade'