Home » Lifestyle » Say What? ’Salad Frosting’ Is Kraft’s Version of Dressing for Kids

Kraft is reinventing salad dressing! Well, sort of. The food producer rolled out its #LieLikeaParent campaign on Monday, June 10, which is its answer to getting children to eat more healthily.

As part of the initiative, the brand introduced something called Kraft Salad “Frosting,” – Kraft Classic Ranch Dressing disguised in a frosting tube. The inventive food item was designed to give parents a hand in upping their lie game.

Believe it or not, 63 percent of U.S. parents admit to telling instrumental lies to get their kids to clean their plates. Furthermore, Kraft’s new product is especially important considering the company estimates 75 percent of American kids eat salad only once a week. 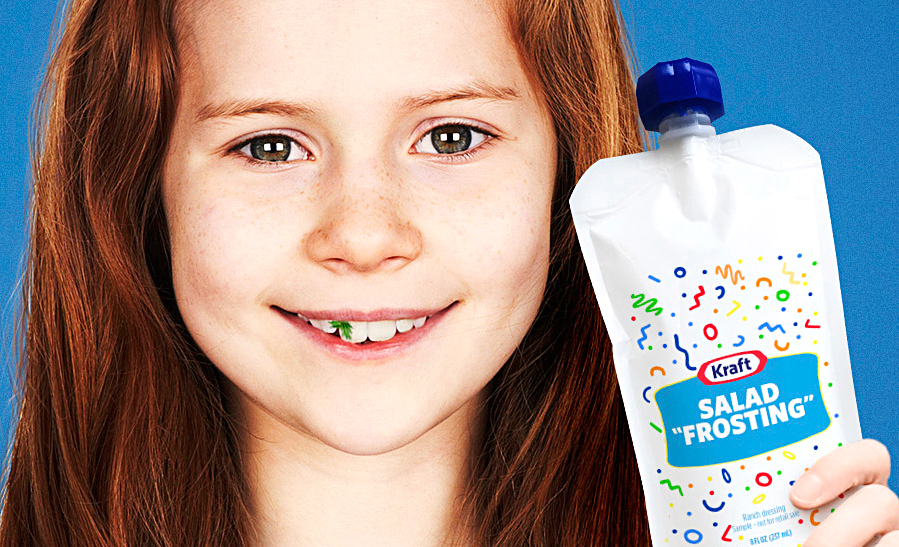 “Innocent lies parents tell their kids help alleviate the pressures of everyday parenting, and if it gets kids to eat their greens, so be it,” said Sergio Eleuterio, head of marketing for Kraft. “Simple innocent lies are not only part of parenthood, but a true tactic used by parents everywhere. Kraft Salad ‘Frosting’ is one lie you won’t feel bad telling your kids.”

According to a recent study, ranch dressing is the most popular dressing in the United States, meaning little ones are probably most likely to eat salads with this topping, especially if it comes in a frosting tube. With this invention, the Chicago-based brand hopes that convincing children to eat salad, broccoli and carrots might just get a whole lot easier.

What’s more? For a chance to win a tube of limited-edition Kraft Salad Frosting, parents across the country can share their best parent lies on Twitter using #LieLikeAParent and #contest. Kraft will then select 1,500 winners based on likes and originality, and send them a free product sample.

Salad Frosting is the latest creative new food item from the Kraft-Heinz empire. The company celebrated Ed Sheeran’s love of ketchup by debuting limited-edition Edchup bottles earlier this month, and released “Kranch” sauce – a combination of ketchup and ranch dressing – in April 2019. That rollout followed the release of a trio of hybrid sauces – Mayochup, Mayomust, and Mayocue – which have all hit shelves in the past year.

Is your snoring putting your LIFE at risk? Expert shares warning signs