Downing slope! Samantha Cameron screams in joy as she goes sledging with daughter Nancy in Oxfordshire

Much of the UK woke up on Sunday morning to find their gardens blanketed under layers of snow.

And Samantha Cameron, 49,  made the most of the wintery weather as she headed up a hill in Oxfordshire with her family for a spot on sledding.

Taking to Instagram, the wife of 54-year-old former prime minister David Cameron shared a video showing her sat on the back of the sledge while their daughter Nancy, 17, took the front seat.

The pair squealed as they headed down the steep slope while Samantha waved to the camera. 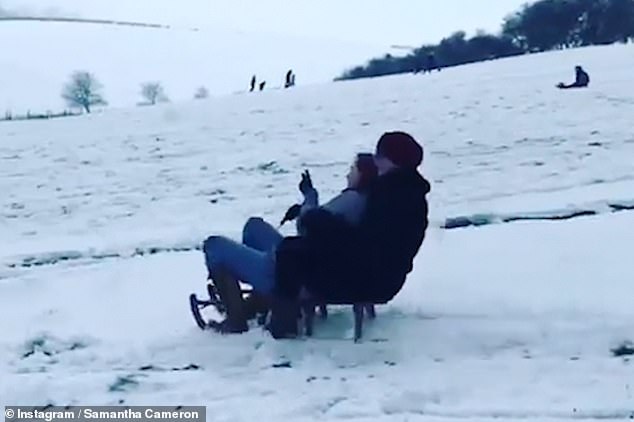 Samantha Cameron headed out to a hill in Oxfordshire with her family as she shared a clip on a sledge with daughter Nancy, 17

A group of people could be seen at the bottom of the hill, with one of the women on the sledge shouting: ‘We’re going to crash into those people.’

It comes just weeks after Samantha was accused of breaking bird flu rules after posting a picture of her chickens in the snow.

Samantha posted a snap of four roaming hens outside on December 31. 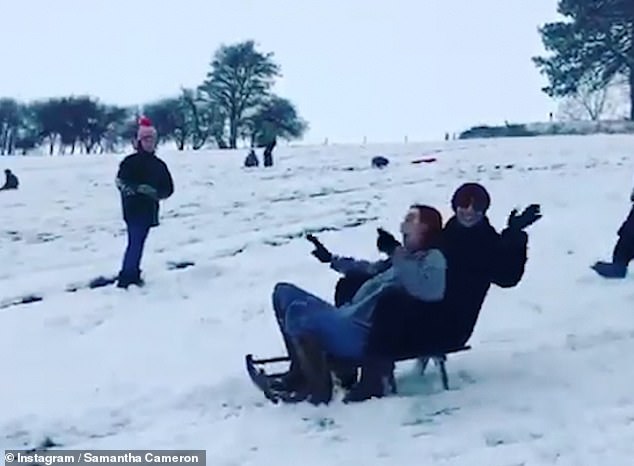 The pair squealed as they headed down the steep slope on the sledge, as Samantha waved to the camera 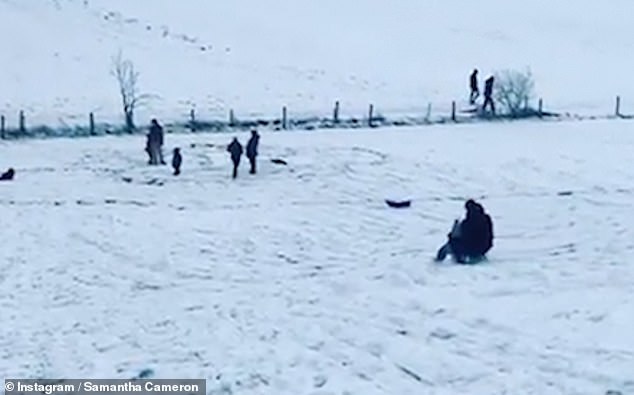 A group of people were stood at the bottom of the hill, with one of the women on the sledge shouting: ‘We’re going to crash into those people’

But her followers on social media soon accused her of breaking rules, citing Government rules introduced on December 14 stipulating that hens must be ‘housed indoors’.

The rules are designed to protect poultry and other birds within Britain from a number of highly pathogenic strains of avian influenza (bird flu) which are circulating in the UK and Europe.

The businesswoman has been open on social media and often spoken about her personal life since her husband left office, last year revealing how she and David went through a rough patch while in Downing Street. 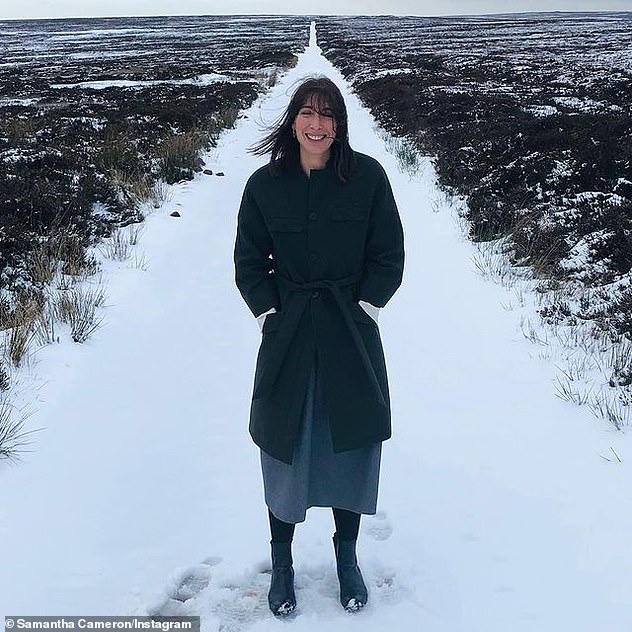 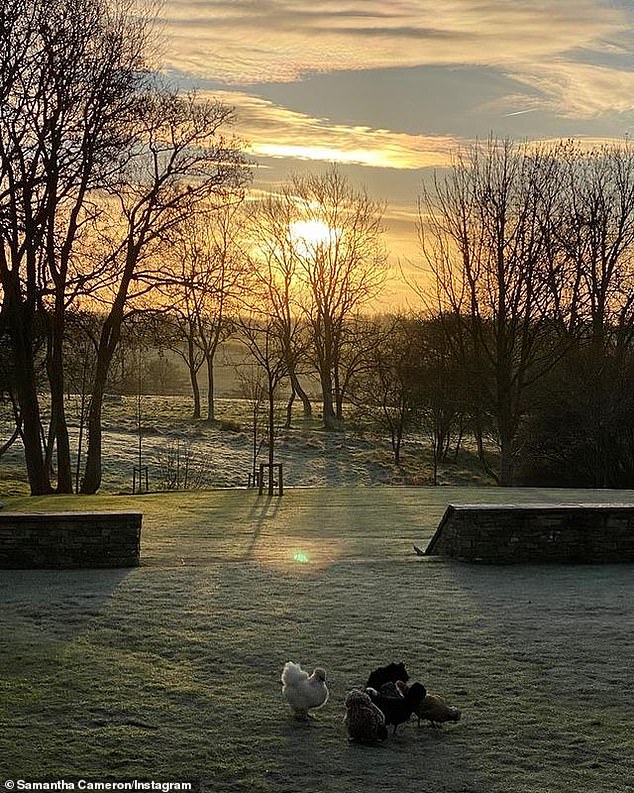 The couple now live with their three children Nancy, 16, Arthur, 14, and Florence, 10, in their £1.5 million home near Chipping Norton, Oxfordshire.

Speaking on n Giovanna Fletcher’s Happy Mum, Happy Baby podcast last year she revealed: ‘There was a couple of years ago when [David] was travelling a lot about a year after he left Downing Street and I was working really hard on my business and it was one of the few times in our marriage when I just thought “I’m just not sure we are getting on very well, this is really weird”.’

In a rare interview she revealed the couple ‘never’ go out at night anymore because she feels she has to be at home ‘all the time’ to look after her teenage children. 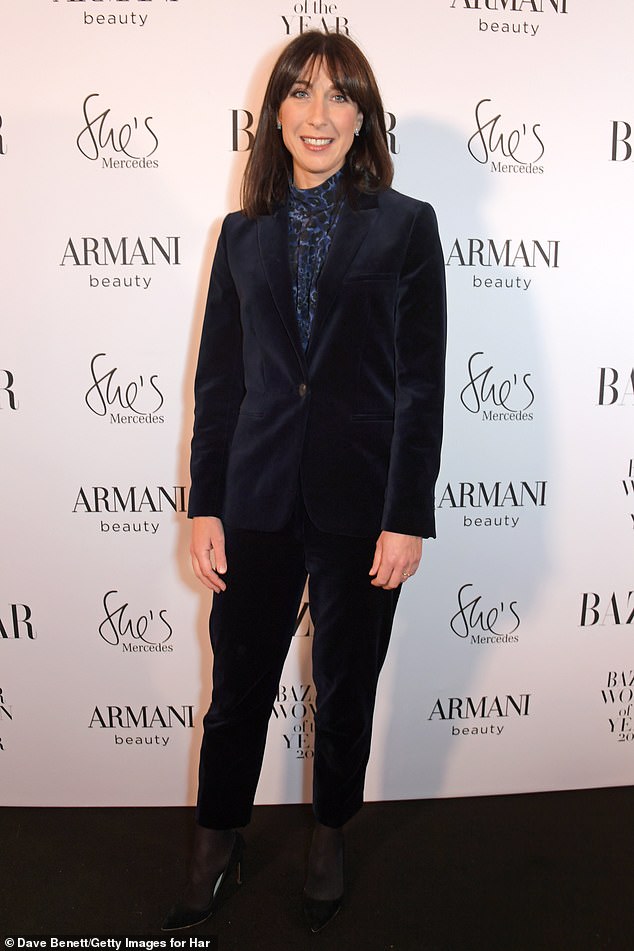 The wife (pictured) of former prime minister David Cameron sat on the back of the sledge with Nancy on the front, squealing as they slipped down

‘I’m not very good at ever spending time away from the children with [David] on my own,’ she added.

Last year, she also admitted she ‘didn’t expect’ her husband would be ‘overly involved’ with their newborn daughter Florence when he was Prime Minister.

She spoke of life in Downing Street, after giving birth to daughter Florence shortly before David first took office in 2010.

Appearing on ITV’s Lorraine, she revealed David had always been a ‘brilliant dad’ and would ‘always’ give his children Florence, Nancy and Arthur, now 14, an evening bath when they were ‘tiny’.

She said: ‘I think I was on my fourth by then, so I think it seemed fairly seamless. I have to say, I wasn’t expecting him [David] to get overly involved.

‘He’s always been a brilliant Dad, so I think one of the things we always did with the children when they were really tiny is he would have a bath with them and that was quite bonding.

‘It was also much easier than for me to bath in one of those tiny plastic things where you’re always terrified you’re going to drop them and they’re going to slip out of your hands, so he always did that when he could and we sort of muddled through somehow.’