Anna Delvey is running 10 minutes late for our Zoom call, which is curious given she’s under house arrest. The 31-year-old, whose life and crimes were dramatised in the hit Netflix series Inventing Anna, is currently confined to her apartment in Manhattan’s East Village, so New York City traffic can’t be to blame.

I’m about to email her publicist when a face appears on the screen.

“Sorry, sorry, I went to check in with my parole officer, I have to go there once a week,” Delvey explains before adding with a laugh: “I actually asked if I could come and check in twice a week because that’s the only time I am allowed to leave the house.”

For someone who just got out of prison, she looks remarkably fresh. She’s decked out in a black hoodie with “Delvey Mail” on the front – a nod to the tabloid newspaper that documents her every move – and her grey-blue eyes are lined with mascara.

But her life now is a far cry from the mid-2010s when Anna Sorokin (her real name) was masquerading as a German heiress with tycoon parents and a (nonexistent) trust fund.

Using fake financial documents and wire transfers, she convinced Manhattan’s elite that she was one of them, forging her way into a world of boundless possibility. There were trips overseas on private jets, long lunches at New York’s fanciest restaurants, and even longer stays at five-stars hotels.

It was a dream life built on a lie, but eventually, it all came crashing down. 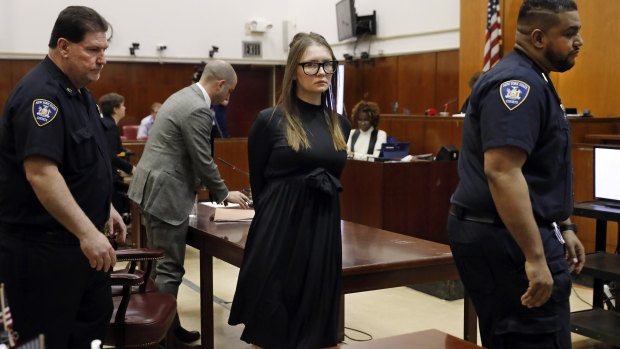 In 2019, a Manhattan jury convicted her of various financial crimes, including grand larceny. She was released in February 2021 but detained again by immigration authorities for overstaying her visa, and sentenced to a further 18 months in prison.

However, earlier this month, the judge in the case decided Delvey was not a danger to the community, and ordered her release on a $10,000 bail bond, with 24-hour confinement, an electronic monitoring bracelet and no access to social media. 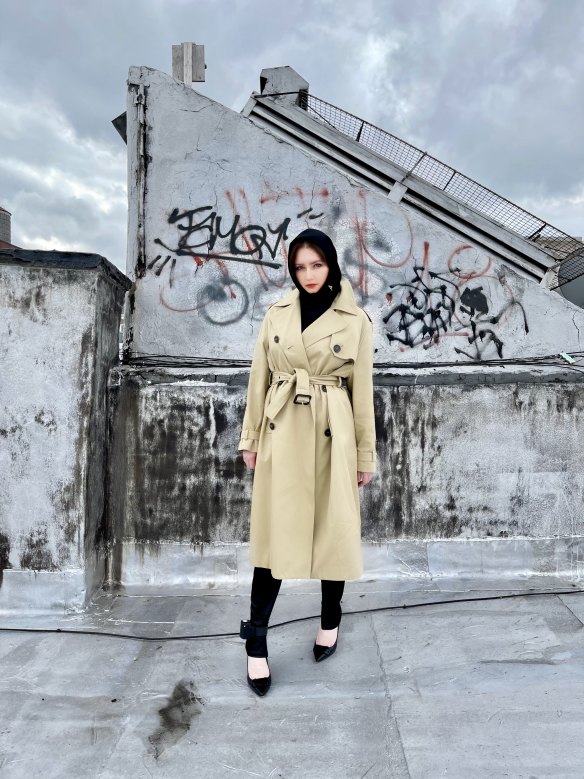 Anna Delvey on the rooftop of her East Village apartment. She is unable to leave the house except to attend parole appointments.

For Delvey, it was a fair trade for access to her phone and a salad. “The food in jail is awful,” she says. “I would only eat trail mix because I’m vegetarian, otherwise, they would give me rice and beans. It’s just really low quality.”

Delvey could watch TV in jail, but while Inventing Anna became one of this year’s breakout hits after its February release, she still has not seen it. 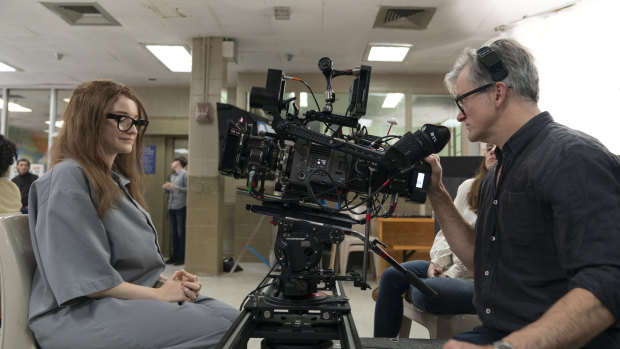 Julia Garner was nominated for an Emmy for her portrayal of Anna Delvey in Inventing Anna. It wasn’t enough to convince the real Delvey to tune in.

Julia Garner, who was Emmy nominated for her portrayal of Delvey, went to see her in prison, “but it was more of a social visit, chit-chat, you know? She was not like, ‘Oh, teach me how to do X, Y, Z’. We just kind of gossiped.“

Now Delvey’s focus has shifted to a new story. While behind bars, she decided to reinvent herself as an artist, creating original pencil sketches that skewer her chequered past.

“My art is a sarcastic take on the myth of Anna Delvey,” she says. “I use my art as a nonverbal means to communicate my perspective on events that happened to me.”

“At any given moment, I have like 20 to 30 ideas, and whenever the situation calls for it, I make one.”

Before her release, Delvey’s art dealer (yes, she has one) hosted two solo exhibitions (Allegedly and Free Anna Delvey) where original works sold for between $10,000 and $15,000 each. Meanwhile, prints are available online at Founders Art Club, starting at $250.

Little wonder she was able to post bail and lease an apartment that reportedly costs US $4250 (AUD $6,785) a month. 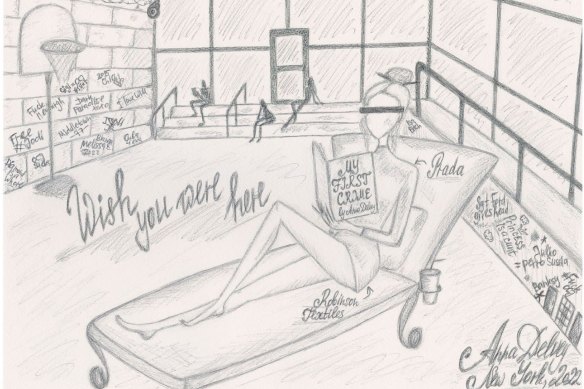 “Wish You Were Here,” an original pencil sketch by Anna Delvey.

“It has been a big financial help, and we’re about to release sales of more originals next week,” Delvey says.

News of her success will undoubtedly lead to questions about the morality of Delvey profiting from her crimes. It could also make some wonder if this newfound creative curve is yet another scam from New York’s slyest conwoman.

The artful Delvey insists she’s genuine. “I’ve made a series of unfortunate mistakes in my past, but I’ve paid for them, and hopefully, I will be given a chance to move on and prove that I’m not whatever they were saying I am,” she says. 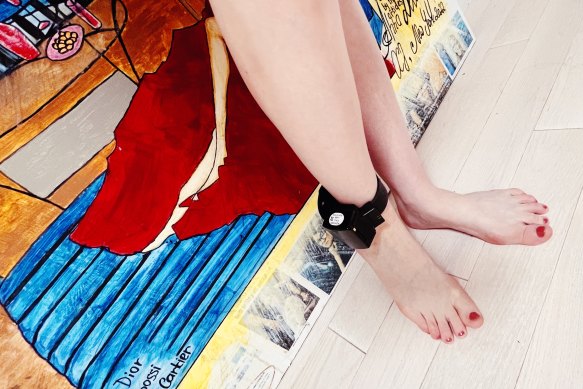 Delvey must wear an electronic ankle monitor as part of her bail conditions.Credit:Anna Delvey

She also insists she’s learned her lesson. “I would strongly discourage anybody from pursuing any kind of criminal activity,” she says. “I want to show people through my art that I struggled, I’ve been in jail for a long time, I had no phone, it was pretty awful.”

Still, it’s hard not to see the silver lining to Delvey’s alleged struggle. She’s back in New York, making a living off her artwork. There’s talk of a tell-all book and even a podcast (“just me talking to like multiple different interesting people,” she says). What more could a girl want?

Food, as it happens. “I’m actually getting pretty hungry,” she says.

“I have not cooked a single dinner yet, so I’m just switching it up between Uber Eats and Door Dash,” Delvey adds. “It’s easier to just pay for it than do it yourself.”

Wilko launches up to half price sale on home and kitchenware