Governor-General David Hurley’s swearing in of PM 31 Anthony Norman Albanese at Canberra’s Government House was a long way from Redfern Oval, but a momentous moment for South Sydney supporters. The two highest political posts in the land, are now held by rabid Rabbitohs fans.

The battling bunnies have come a long way since the bitter court fight to save them, 20 or so years ago when the Rupert Murdoch-backed NRL tried to exclude the club from the rugby league comp. The red and green team was triumphant then, and in 2006 was bought by businessman Peter Holmes à Court and actor Russell Crowe. As we previously noted, Rusty backed Albo by voiceover at the Labor launch. 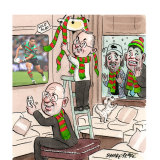 When Hurley was NSW governor he was known to host about 20 Rabbitohs’ mates at Government House on at least one occasion – in the name of a good cause, an organ donation awareness charity run by fellow Rabbitohs supporters. Rabbitohs stalwarts, former ALP kingmaker Laurie Brereton was there and Gift of Life Foundation patron Phil Pike (an ally in the fight against Murdoch) made a speech; but it was no doubt a more relaxed gathering than most vice-regal functions. Hurley, who became the state’s 38th governor in 2014, the same year Souths’ last won a premiership, even flew a red and green flag for the first time at NSW Government House in 2015 in support of Indigenous youth in South Sydney.

The question is, will Albo, a self-confessed Souths tragic be as welcoming as Hurley and keep the doors to The Lodge open to Crowe’s current co-owners, tech billionaire Mike Cannon-Brookes and businessman James Packer? Let’s hope Souths’ Sunday defeat at the hands of Canberra (32 to 12) is not a sign of things to come.

One of the surprise packages of an election that was, well, just full of surprises was the strong showing of the Legalise Cannabis Australia party.

The weed decriminalisation outfit’s policy platform is not hard to understand and, according to one of the campaign’s masterminds, that’s the key to LCA polling nearly 3 per cent in NSW, and 3.3 per cent in Victoria and nipping at the heels of Senate perennial Pauline Hanson, of One Nation fame in Queensland with a very respectable 6.6 per cent, as counting continued on Monday.

Campaign strategist Jorian Gardner is a man who understands the power of an eye-catching party moniker on the ballot, having been instrumental in the election of Sex Party leader Fiona Patten to the Victorian state parliament in 2014.

After a name change to the less racy Reason Australia in 2018, Patten came very close to losing her spot on the state upper house’s colourful crossbench, which just goes to show sometimes it really is all in the name.

Gardner tells CBD that he and his Cannabis colleagues, buoyed by the senate results and their effort at Western Australia’s election last year where they managed to get two of their candidates into Parliament, are targeting upcoming state polls in Victoria later this year and NSW in 2023 and daring to dream of upper house balance-of-power status.

“We said ‘Free the Weed’ and Australians responded,” Gardner said on Monday.

NO RHYME OR REASON

But in sad news for the broader Reason family, the party’s star NSW senate candidate Jane Caro cannot be described as anything other than a flop.

As of Monday afternoon, the feminist activist, writer and broadcaster along with her two party colleagues had amasses the grand total of 13,232 votes, or 0.63 of the ballots cast in the state. To put that in context, Caro has more than 161,00 followers on Twitter.

But she wasn’t the only “big” name to struggle in the senate race, Human Headline Derryn Hinch and his Justice Party managed just 21,000 votes in Victoria, former high-profile South Australian independent Nick Xenophon and his colleague Stirling Griff were sitting on 15,429.

Former army commando and pay-per-view pornography model Heston Russell failed to catch the eye of Queensland voters with Russell and his Australian Values Party colleagues clocking up a shade under 7000 votes by Monday afternoon.

The Department of Parliamentary Services lost no time in whipping the name plates from office doors in the soon-to-be-vacated ministerial wing while outgoing deputy prime minister Barnaby Joyce and his chief of staff Jake Smith, were seen sucking on cigarettes in the opposition leader’s courtyard while making phone calls.

Labor’s gang of five were still in their opposition offices, before Albanese and his new foreign minister Penny Wong jetted off for the Quad talks in Tokyo. The new DPM Richard Marles, freshly minted treasurer Jim Chalmers and finance minister Katy Gallagher were spotted walking around with big grins between briefings from their departmental chiefs.

Which pubs have opened in the UK and what are the Covid rules?

Australia loses one of its classical greats, Barry Tuckwell