Royal fans have delighted in the return of Prince Harry and Meghan Markle, Duchess of Sussex to the UK this month, with many hoping the Queen’s death will reunite them with Royal Family members after years of a rumoured rift. The Sussexes have been pictured at several commemorative events in recent weeks to honour the late Queen Elizabeth II, whom the couple so adored.

Meghan has acted as Harry’s rock in recent days, as the King’s son has been wracked with grief over the death of his beloved grandmother.

Body language expert Judi James said: “As an actress, Meghan knows all about stealing a scene but also when to appear in the role of support.

“Her rather low-key body language in the UK has leaned heavily on the side of support, in terms of both her husband and his open grief, and support when it comes to seeming to avoid any drama in a show of respect for the Queen.”

Dressed in military uniform at a vigil of the Queen’s grandchildren, Harry looked deep in emotion as he poignantly stood silent in honour of his Commander-in-Chief. 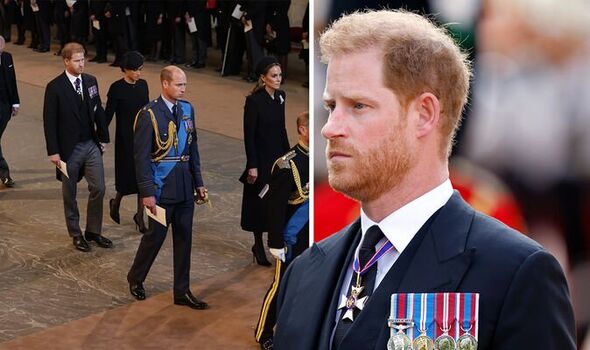 At a service at Westminster Hall and while walking behind the Queen’s funeral procession, Harry was pictured fighting back tears.

But according to the expert, during this time Harry didn’t seem to re-bond with the Royal Family. Judi claimed: “Harry has seemed to struggle at times, in a way that suggests not only mourning but also sadness at the sight of his family.

“It’s clear the couple feed off one another and their instant hand clasp after the service, plus the way we could see Meghan stroking Harry’s hand and back in a gesture of reassurance showed how vital this contact and the tie-signs are for them.

“There seems to have been no re-bonding signals with William or Charles, and there have been times the couple have appeared wary or reluctant to move into the crowds without using non-verbal checking rituals first.

“Harry neither acted like the prodigal son nor was he treated like it, and there will presumably be a breathless pause before we find out on their return how they really felt about their treatment.”

Harry and Meghan extended their stay this side of the Pond after news broke of the Queen’s ill health on September 8.

The couple had previously attended the One Young World Summit in Manchester on September 5, and an Invictus Games event in Dusseldorf on September 6, but the pair dropped everything to be with the Royal Family.

Harry was pictured travelling to Balmoral Castle to be with the royals in Scotland, and news of the Queen’s death broke while he was en route. 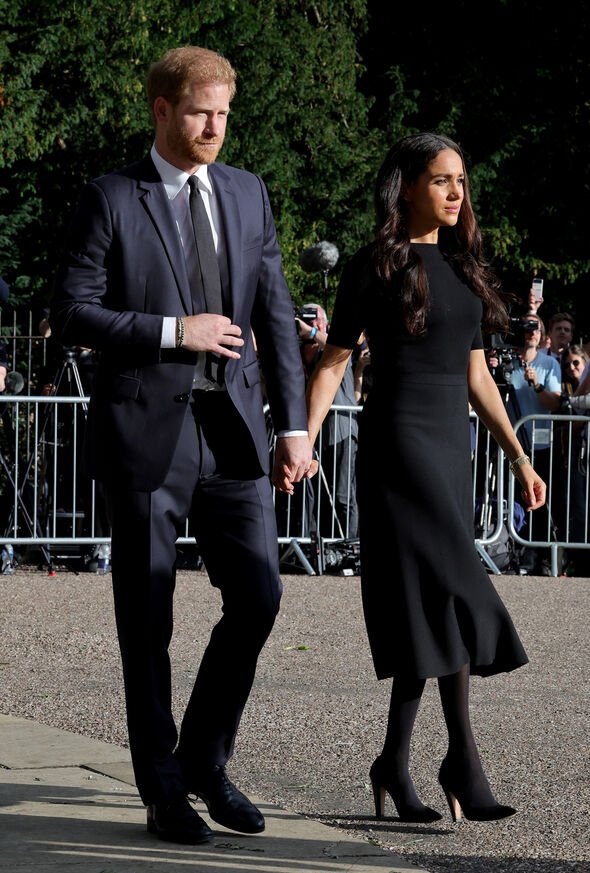 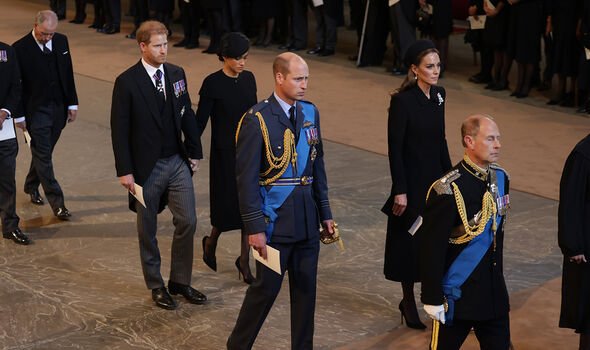 The couple stayed in the UK for nearly a fortnight, but they reportedly travelled home to the US promptly to be with their children Archie and Lilibet.

An insider told Us Weekly: “Meghan and Harry are preparing to return to Montecito almost immediately after the funeral, where they’ll be reunited with Archie and Lilibet after being separated for over two weeks.”

The source noted this has been “the longest amount of time they’ve been apart from their children.”

The death of Queen Elizabeth II has been profound for the nation and the Royal Family, and Harry paid tribute to her in a heartfelt statement. 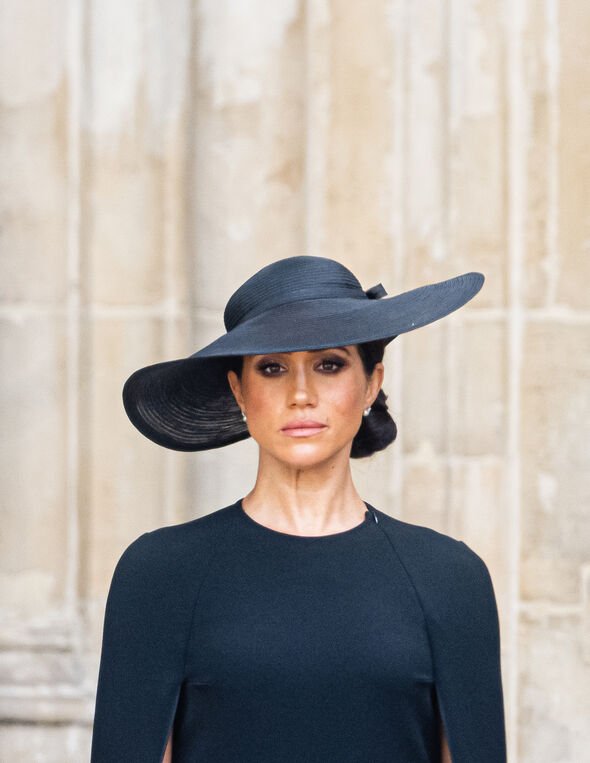 Harry said on his Archewell website: “Granny, while this final parting brings us great sadness, I am forever grateful for all of our first meetings – from my earliest childhood memories with you, to meeting you for the first time as my Commander-in-Chief, to the first moment you met my darling wife and hugged your beloved great-grandchildren.

“I cherish these times shared with you, and the many other special moments in between. You are already sorely missed, not just by us, but by the world over.

“We, too, smile knowing that you and grandpa are reunited now, and both together in peace.”