Australia was a guest at the G7 leaders’ meeting in England, where the United States, United Kingdom, Canada, France, Germany, Italy and Japan vowed to “achieve an overwhelmingly decarbonised power system in the 2030s”. 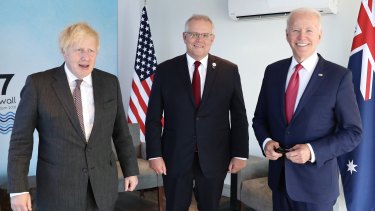 Australia has been under pressure from allies including the US and UK to increase both its commitment to reach net zero “as soon as possible and preferably” by 2050 and a 2030 target to reduce emissions by 26 per cent from 2005 levels.

Following the lead of US President Joe Biden, G7 nations have each recently upped their 2030 goals and set deadlines to decarbonise their economies by 2050.

Mr Morrison told reporters on Monday morning AEST there was no pressure from G7 leaders over the government’s climate policy and reiterated Australia was investing in new technologies to transition to a new, clean-energy economy.

He said he would “ensure that the jobs of Australians, the price of their electricity, it is affordable and reliable, the lights staying on and we address these environmental challenges, our regions thrive and our heavy industries come through”.

The G7’s resolution included an in-principle decision to introduce carbon border tariffs to stop goods from countries without carbon taxes from undercutting jurisdictions with them. Australia has previously said it will push back against such a move and instead argue for tariffs to be slashed on more than 50 environmental goods and services.

The G7 also committed to cease direct government funding at home and abroad for any new coal plants that did not include carbon capture technology, including a $US2 billion fund to help developing nations decrease their coal use.

Mr Morrison said the nation’s fleet of coal-fired power plants “obviously has an economic life” and Australia was not pursuing anything like the projects the G7 had agreed to rule out. While the federal government has funded a study into the feasibility of a private coal plant in northern Queensland, there are currently no plans to build one in Australia.

However, speaking to media in Australia on Monday, Deputy Prime Minister Michael McCormack noted Australia was not a signatory to the G7 resolution and said 55,000 people worked in the coal industry, which produced $66 billion in exports.

Climate change advocates criticised the lack of detail in the G7’s resolution, as well as its failure to support the mooted Green Climate Fund to provide $US100 billion in finance for developing nations to tackle climate change.

“The $100 billion promised a decade ago is the minimum of what is needed to build trust before COP26 [at Glasgow in November] and meet past obligations,” Mr Essop said.

Oxfam head of inequality policy Max Lawson said “it is unacceptable that most of the G7 missed the opportunity to make new pledges of climate finance”.

“The G7 have failed to set us up for a successful COP26 as trust is sorely lacking between rich and developing countries. Rebuilding this essential multilateral trust means … delivering on commitments for climate finance for the most vulnerable countries, and kicking fossil fuels out of politics once and for all,” she said.

Meanwhile, a controversial change to the remit of Australia’s Renewable Energy Agency (ARENA), proposed by Energy and Emissions Reduction Minister Angus Taylor in May last year, is expected to be put to a vote in Federal Parliament’s lower house this week. Mr Taylor wants to allow ARENA to fund fossil fuel technology including carbon capture and storage and “blue” hydrogen, which is produced with gas.

The move is a political wedge for Labor, which faces internal division between its Left and Right factions over energy policy. Labor’s climate and energy spokesman Chris Bowen said the opposition would oppose the changes.