Home » Lifestyle » Penn and Teller shipped their popular magic show to Australia. Then it disappeared 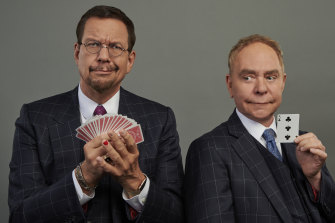 Penn and Teller have been sharing the limelight together for 47 years.

What do you do when you’ve planned a stage show that has to be packed and shipped across the world for your first Australian tour, only to discover it won’t arrive for your first performance?

If you take a leaf from magic and comedy duo Penn and Teller’s book, you simply get back to work. After all, a challenge is what Penn and Teller like best.

“I sat down with our stage manager, and our whole team, and came up with a show that I love,” the usually silent partner, Teller – it’s just Teller, legally – explains on a call from Las Vegas.

After 47 years of working together, Teller and Penn Jillette have an impressive and extensive body of work to draw on, but there’s also new material coming for Australian audiences. Initially a setback, the shipping problem soon became a cause for creativity.

“Australia is a combination of really new stuff, and really, really old stuff, and it’s stuff we felt like doing. I know it’s going to be a blast for us to do. I’m hopeful the audience will like it,” Jillette says.

For the first six years we worked together, we barely managed to get along.

The two are the longest-running headliners in Las Vegas history, with a show that’s been on stage since 2001. For many artists and performers, Vegas is where you go to get comfortable, relax, or as Jillette likes to say: “Play golf”.

Not Penn and Teller.

“I don’t know why people get into showbusiness to get out of it,” Jillette says. “We’re not sick of the old stuff. We love the old stuff, but it’s really fun to think of ideas, and have people like them. It’s the most fun in the world.”

This enthusiasm and intellectual curiosity is shared by both men, and is the foundation of their long and fruitful collaboration. Penn and Teller didn’t start out as a team because they were friends, nor do they spend much time together when they’re not working. 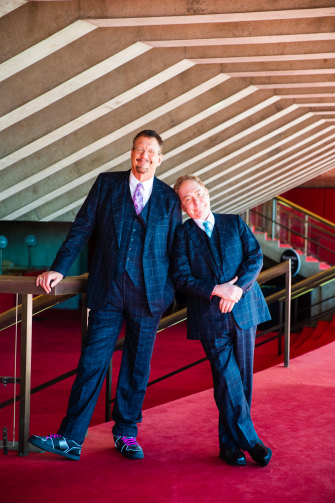 Penn and Teller are the longest-running headliners in Las Vegas history, with a show that’s been on stage since 2001.Credit:Edwina Pickles

“We don’t socialise very much, and the reason is we’re together all the time. If we went out to dinner after working together all day [it would be like] ‘What did you do today, Teller?’ ‘Same thing you did’. No surprise there, nothing interesting,” Jillette says.

Penn and Teller’s success over nearly half a century comes from hard work, a boundless passion for magic and endless, rigorous debate. When developing a new idea they first spend huge amounts of time pulling the idea apart. And what’s left, well, that’s magic. 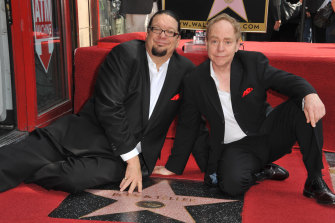 Penn & Teller got their star on the Hollywood Walk of Fame in 2013.Credit:Shutterstock

“If I have an idea that won’t hold up to Teller’s scrutiny, I don’t want to spend three weeks working on it,” Jillette says. “It’s really a time-saving situation.”

It’s that practical approach to their career that’s also allowed time for other endeavours, including the popular television show Penn and Teller: Fool Us, where magicians and fellow illusionists perform tricks in front of the pair. Penn and Teller then try and work out how the trick was done, but if they’re unable to, or they are wrong, the magician who performed the trick receives a trophy and an opportunity to be the opening act at one of the duo’s Las Vegas shows.

When I was 15 or 16, I could not have loved Bob Dylan, the Velvet Underground, Mothers of Invention, Frank Zappa, or the Residents more.

The show was first broadcast in 2011 and early this year was renewed for a ninth season.

Teller is passionate about magic. His home contains an array of magic artefacts, including a talking tea kettle and Houdini’s black cross. As for Jillette, magic’s spell over him came later in life. While Teller discovered the thrill of magic as a five-year-old, Jillette’s first love was music.

“I’m a music fanatic,” he says. “I play upright jazz bass, and most of my friends are in music. I play music every night, and when I was 15 or 16, I could not have loved [the music of] Bob Dylan, the Velvet Underground, Mothers of Invention, Frank Zappa, or the Residents more.

So how did he veer towards a career in magic?

“I looked at music and said: ‘I have some skill here, but boy, I’m not the level of the people I idolise’. I looked into magic and said: ‘wait a minute, I have something I can bring to this field that no one is doing. I don’t know how good I am, but I know that I have an idea that no one in magic seems to have done before, and I think I can play with that’.” 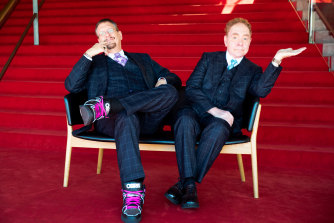 Penn and Teller have very different stories for how they came to work in magic.Credit:Edwina Pickles

Part of what makes a Penn and Teller show memorable has much to do with the way they approach magic, and what they believe to be the central tenet of the form: consent.

“To me consent is everything, everywhere,” Jillette says. He abhors magic shows that use manipulation and lie to the audience without their consent, and considers their show as a space to “push around the sides of truth and ascertain what’s real”.

Teller, who does not speak during shows, says magical deceptions are often visual or physical manipulations of things we know to be true. The man is in the box, and he can’t get out – except, hang on, he did. Your brain says “that’s not possible”, and then it says “but how did they do it?”

Why does Teller stay silent on stage?

“I have one of the best talkers in the world to talk for me. I just consider it division of labour,” the 74-year-old says.

“There are a number of things in our repertoire where Penn’s sole job is to speak, and my job is the action. That turns us into sort of one person. It turns us into a person who can both speak and act, and I like that kind of interdependency in human beings.

“I remember there was a period of time, when I was growing up, almost everybody who was involved in comedy was involved in some kind of team … The Smothers Brothers, for example, or way, way back George and Gracie, Abbot and Costello, Laurel and Hardie.

“It’s more interesting to see a team, a pair of brothers as it were, or in effect a married couple, that function together as one thing.”

Truth, consent, deception: these are weighty subjects, each dealt with lightly by the duo on stage. However, in their daily lives, both have watched as America has changed over the years, and it has brought about some personal reckoning.

Jillette admits he struggled with the rise of Trumpism.

“It’s been a very disheartening time, especially for someone like me, who never identified as Democrat.”

He says before Trump he held two “absolute truths”.

“I believed that every President of the United States had been smarter than me. I believed that people in power, although they could be corrupted, that essentially in their hearts they were trying to do what was best. I had to confront the fact that those two things were no longer true.”

And then the pandemic came along and compounded it.

“The word libertarian, which I used to be kind of comfortable with, became a nightmare word because people started saying it was their right to put other people in danger.”

He describes the pandemic as “heartbreaking” and a reminder “we are one organism of 7.6 billion people”.

Teller says, although he continues to place a high value on freedom and liberty, his perspective on Libertarianism has changed.

“You look at the madness that has possessed the world, and I guess it is totally possible that it isn’t the world that’s changed, but that we’ve just grown up a bit more.”

Teller reaches for a literary reference to try and explain this idea further.

“That’s what being a human being involves,” he says.

Penn and Teller are at the Sydney Opera House, June 1 to 11, and Hamer Hall, Arts Centre Melbourne, June 14 to 18.