One-third of NSW households will be able to access 10 years of upfront payments to put towards a solar system or white goods, under a new NSW government program to cut energy bills as power prices soar.

The state government will initially provide funding in this month’s budget for 30,000 households to access the upfront payments, at a cost of $128 million, but will consider further spending if there is strong uptake. 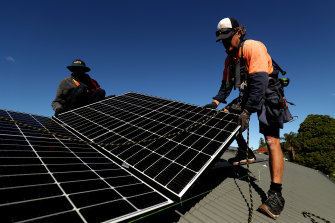 Thousands of NSW residents will be able to apply for solar system instead of an annual energy rebate under a new budget announcement.Credit:Bloomberg

About 1 million NSW households who have a pensioner concession cardholder already receive a low-income energy rebate to help with bills but will soon be able to apply for the equivalent of up to 10 years’ of rebates in an upfront payment instead of an annual $285 subsidy.

If those households also have gas, they are entitled to an extra $110 subsidy, taking their annual payment to $385.

People living in properties where solar is not an option such as apartments will be able to access up to $4000 in home appliance upgrades if they take up the option of upfront payments.

NSW Premier Dominic Perrottet said installing a solar system could ultimately save households as much as $600 per year on the electricity bills by switching to renewable energy.

“The NSW government is securing a brighter future for NSW families by helping boost the household budget, taking the pressure off families and small business, leaving more money in your pocket at the end of the week,” Perrottet said.

“Our strong financial management is helping grow the economy, which means more money for services, community amenity and less pressure on households. This announcement is helping build what matters to make daily life better.”

“People living in apartments or renting who can’t have solar installed may be eligible to swap their rebate for a suite of energy saving appliance upgrades, helping to reduce demand on the grid and lower power prices for everyone,” Kean said.

“These include energy-efficient fridges, dryers, air-conditioners and hot water systems, and upgrades such as window shading and draught sealing valued at up to $4000.”

Kean last month announced an increase to the state’s Energy Accounts Payment Assistance program for households experiencing short-term financial hardship. Under the program application limits will increase from $300 to $400, up to a maximum of $1600 a year.

It followed the Australian Energy Regulator warning there will be double-digit jumps in household and small business bills across the country within weeks with price caps on what retailers can charge set to rise.

So-called “default market offers” – price caps on what retailers can charge households and businesses that don’t take up special deals or bundle utilities bills – would rise in all states across the east-coast electricity grid.

I toured a $29.5 million mansion on 'the Park Avenue of Miami Beach,' a glitzy waterfront street that's home to Hollywood stars and professional athletes. Look inside the 12-bedroom home.