Ryan Reynolds was first lined up to star in Shotgun Wedding in 2019 with Jason Moore, director of the hugely popular Pitch Perfect, at the helm. Then Jennifer Lopez signed on, and Armie Hammer replaced Reynolds, who moved to executive producer. Then, in early 2021, Hammer stepped down from the film after he was accused of, among other things, cannibalism (I am not making this up). 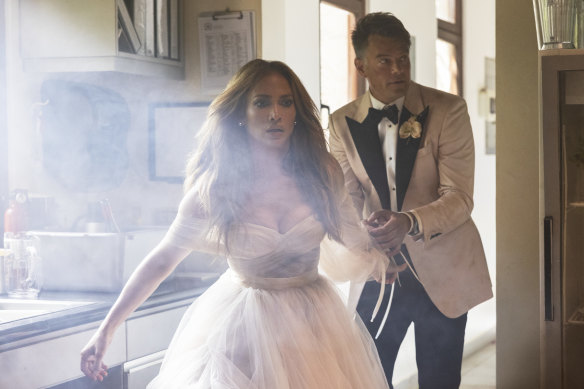 So we now have Josh Duhamel as the beefcake, with comedy stalwarts Cheech Marin and Jennifer Coolidge in supporting roles, and some odd additions, including Lenny Kravitz and the great Brazilian actress Sonia Braga.

There’s a hint of desperation about such a collection – a hope that individual schtick will keep us watching if the central pairing becomes dull. And to be honest, Duhamel is not in J. Lo’s league as a comic actor, so there’s a sense of imbalance.

This kind of comedy requires equal stature for the leads, or it becomes a one-woman show. Katharine Hepburn and Cary Grant, Hepburn and Spencer Tracy, but not Hepburn and Van Heflin or Guy Madison. And while Lopez is no Hepburn, she does have a vast amount of experience in both comedy and romance – more than enough to carry this carry on, at least. 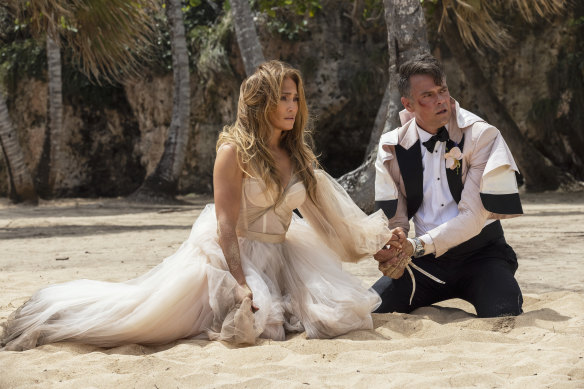 The newlyweds are roped together with cable ties rather than promises to keep in Shotgun Wedding.Credit:Ana Carballosa/Amazon Prime

The idea is simple: Darcy Rivera (Lopez) and Tom Fowler (Duhamel) are about to tie the knot on a gorgeous resort island in the Philippines, with all the family tensions that entails, when a dozen modern-day pirates storm ashore and start shooting. They want Robert (Marin), the father of the bride, to deposit $45 million in a bank account or his daughter gets it. Kravitz, as her ex-boyfriend, tells everyone to stay cool. Meanwhile, the leads blunder through the bush, roped together with cable ties rather than promises to keep.

Anyone can see the pirates are on a commissioned job. They’re all painted and decorated with exotic headpieces, about as scary as the Muppets. Far from being the reluctant bride-in-traditional-gown, Lopez strips away the tulle to reveal her strength and her smarts.

At 53, she insists on being seen as sex symbol, girl-power symbol and comedy queen, all at once. And damned if she doesn’t succeed. She is big, it’s the pictures that got small.

The comedy is patchy, gusting funny. The film is best when at its most ridiculous, worst when it turns serious. The script, by Mark Hammer, falls under the category of modern screwball, or perhaps it’s a pirate romance, with actual violence on top. Either way, it’s neither fully one way or the other. There’s enough to cut a good trailer, but precious little more.

Shotgun Wedding is on Amazon Prime from January 27.