Pensioners won't get the automatic boost to their bank balances they're used to in September because inflation went backwards in the June quarter.

The only welfare benefit that will go up in the regular six-monthly review is the single parenting payment, which will rise by $3 a fortnight on September 20, Department of Social Services officials confirmed to a parliamentary committee on Tuesday. 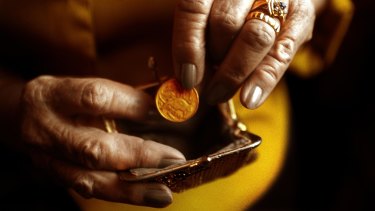 Australia’s pensioners will have to wait until at least March to see an automatic rise in pension rates.Credit:Fairfax

Consumer prices fell by 1.9 per cent in the June quarter, taking annual inflation to minus 0.3 per cent.

"Based on the calculation for indexation, if it's negative, we don't reduce the pension but we also don't increase it," DSS deputy secretary Nathan Williamson said.

He could not say how long pensioners would have to wait until their payments did go up.

"I'm not in a position to say that because we have to wait to see the broader economic outcomes," he said.

JobSeeker payments, which mostly go to unemployed people, also won't rise in September because, like pensions, they are linked to the consumer price index.

"It all comes down to the different formulas, the different statutory formulas which are applied," acting deputy secretary Shane Bennett said.

Each payment is reviewed every six months, in March and September, to reflect changes in living costs and wages.

Officials said they probably would not have the data until about mid-February to know whether a rise would go ahead in March 2021.