Home » New minister must be allowed to shine

New Home Affairs Minister Karen Andrews says she is a problem-solver who acts on the evidence. She has plenty of experience outside of politics and showed in the days before her appointment that she has the courage to speak her mind, when she told journalists she’d had a “gutful” of the way women were treated in politics. This is the sort of politician Scott Morrison needs in his cabinet to win back women voters and to advance the national interest. 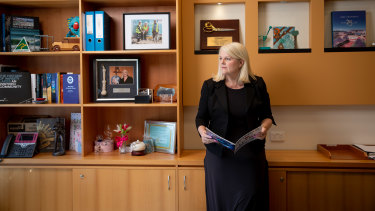 Andrews has made it clear the government’s hardline asylum-seeker policy will not change with a new minister, but she says her focus will be on more pressing issues within her wide-ranging portfolio. If this shift in emphasis suggests a more nuanced and considered approach to Home Affairs policy, one that is less driven by headlines and winning votes, Australia will be the better for it.

The divisive “stop the boats” one-liner championed by Peter Dutton and Scott Morrison may have won the Coalition elections in the past, but in a world gripped by COVID-19 it is dated. The bigger issue for voters right now is not who might be “sneaking” into the country, but when they themselves can get out, given fears the government’s bungled vaccine rollout will keep our borders closed for longer.

Andrews will be a key part of discussions about when and how to reopen our borders.

As the minister in charge of border protection, Andrews will be a key part of discussions about when and how to reopen our borders. She must push in cabinet for greater movement across our borders in a way that does not compromise our safety. Every day of border closure prevents Australians resuming their pre-pandemic lives and stops international students, tourists and business travellers from contributing to our economy.

Andrews acknowledges the safe resumption of international travel is a top priority in her new portfolio, along with guarding against cyber attacks and protecting supply chains and critical infrastructure from foreign interference. These areas were identified as key issues when the Home Affairs Department was first created under Malcolm Turnbull in 2017, but Andrews’ predecessor, Dutton, chose to focus on policies like border security, terrorism and child sex offenders.

Coming from the science and industry portfolio, Andrews is well placed to understand the growing digital threats to our economy and sovereignty and work with industry to develop strategies to counter them. 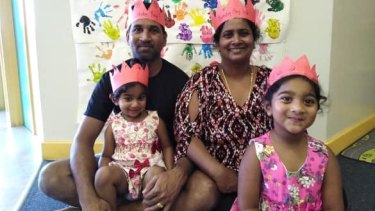 Priya and Nadesalingam and their Australian-born daughters Kopika and Tharunicaa.

And while she may not accommodate suggestions of a change in policy on border protection, Andrews at least has an opportunity, with the nation focused on pandemic recovery, to change the language of our national conversation on asylum seekers.

The government’s hardline stance on this issue can be encapsulated by its treatment of a Tamil family who have now been held in immigration detention for more than three years, since they were seized from their home in rural Queensland at dawn. The couple, who have two Australian-born daughters, were a much-loved and hardworking part of the Biloela community when their bridging visas expired and all four were taken into detention to be deported.

Andrews says she has asked for a detailed written brief on the family’s situation “to look at the facts”. The family deserve her considered attention and review after Dutton showed little compassion for their situation or for the pleas of the Biloela community for their return.

The Australian Election Study shows the Liberal Party has been losing women voters to the left. If it wants to win them back, it needs politicians like Andrews at the fore, who are more interested in policy than politics, and in nuance over tin-eared one-liners. Now let’s see if she can deliver.

Note from the Editor

The Age’s editor, Gay Alcorn, writes an exclusive newsletter for subscribers on the week’s most important stories and issues. Sign up here to receive it every Friday.