A new Netflix documentary about the holiday film favorite Elf has revealed some surprising details from making the movie.

In one episode of The Holiday Movies That Made Us, which debuted last week, the crew behind the 2003 Christmas classic share several behind-the-scenes secrets from filming.

In addition to breaking down how they managed to make Will look so much bigger than the other elves in the North Pole, the documentary also reveals that Will’s scenes on the streets of Manhattan weren’t staged — and that the other people caught on camera were real New Yorkers, not extras. 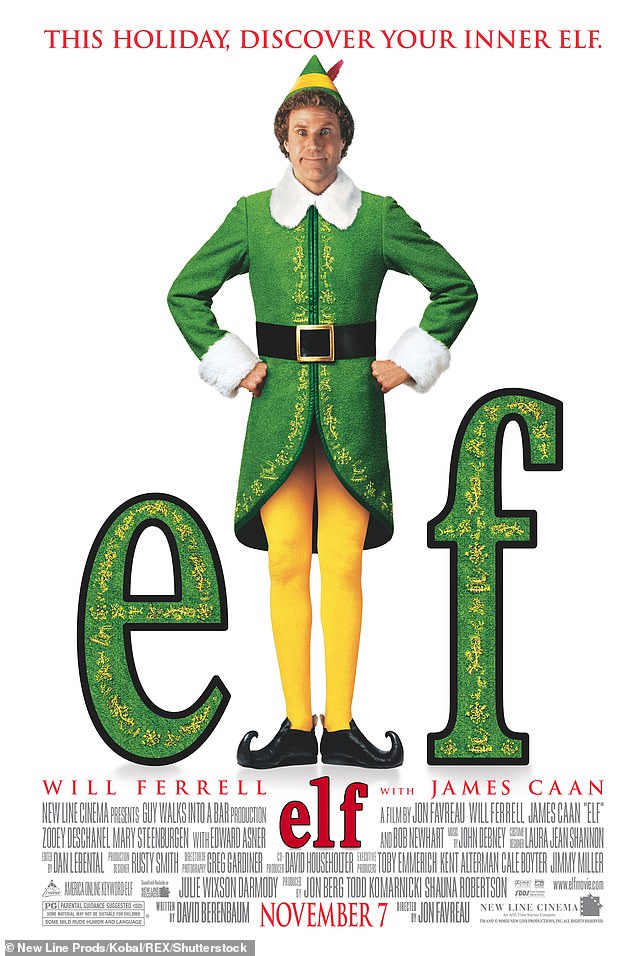 Secrets, revealed! In an episode of The Holiday Movies That Made Us, the crew behind the 2003 Christmas classic Elf share several behind-the-scenes secrets from filming 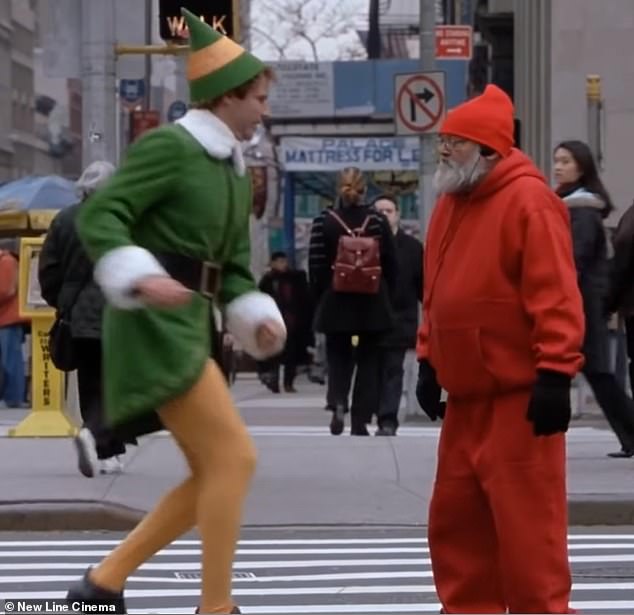 Cute: In one memorable moment in the movie, Buddy the Elf spots a man in a matching red jogging suit and white beard, and excitedly taps him on the shoulder and calls him Santa 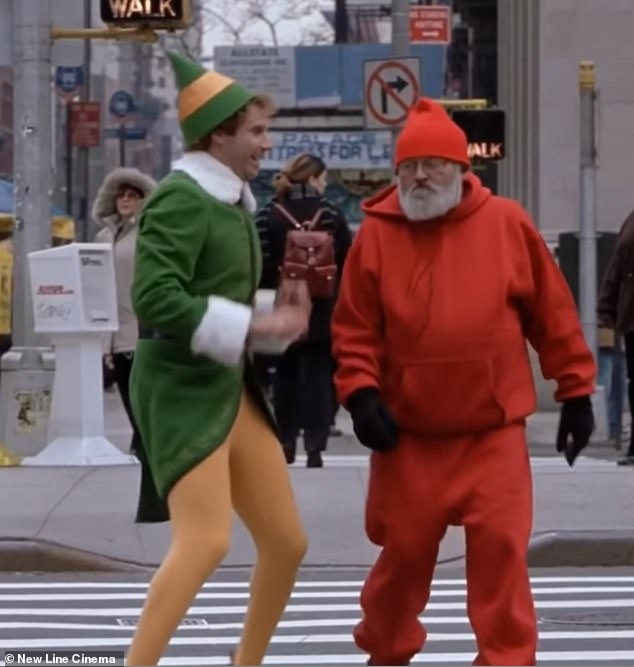 Who knew? The filmmakers said that this man in a red jumpsuit wasn’t an actor or an extra — he just happened to be walking down the street when they were filming

When Will Ferrell’s character Buddy the Elf, gets to New York, he is filmed waking down the street among New Yorkers, smiling wide and dressed in his elf costume.

The film had a small budget, so they weren’t blocking off streets and hiring tons of extras: They just unleashed Will on the city and had the camera rolling.

‘The best way not to have it fake is to have it real, and just put him out there on the streets,’ Director of Photography Greg Gardner said.

That included filming as Will did his own thing — even approaching strangers.

In one memorable moment in the movie, Buddy the Elf spots a man in a matching red jogging suit and white beard, and excitedly taps him on the shoulder and calls him Santa.

‘That guy was just there,’ said Gardner, confirmed that he wasn’t a paid actor.

‘Anything could happen, that’s what I was most worried about,’ Bernstein added.

Will really stood inside the Lincoln Tunnel as cars drove by

In another moment, Buddy the Elf is inside the Lincoln Tunnel, which connects Midtown Manhattan to New Jersey.

He fearfully clings to the side of the tunnel as cars woosh buy — and that, tool, really happened.

According to the filmmakers, Will and the camera crew actually did just walk into the Lincoln Tunnel to film that scene, standing along the small walkway along the edge meant for maintenance and emergency workers. 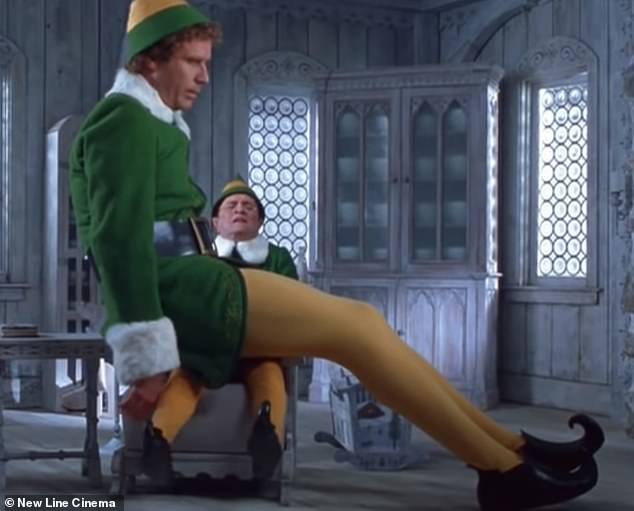 Cinematic tricks: They used forced perspective for scenes like this one, where Buddy the Elf sits on Papa Elf’s lap

Surprise! There was really a child laying underneath, and actor Bob Newhart was sitting ten feet back 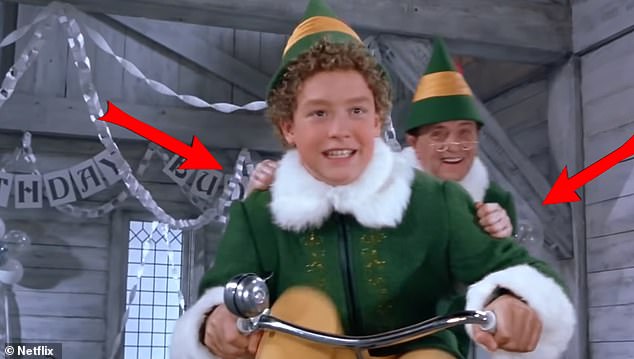 Clever! Papa Elf was also several feet back in this flashback scene 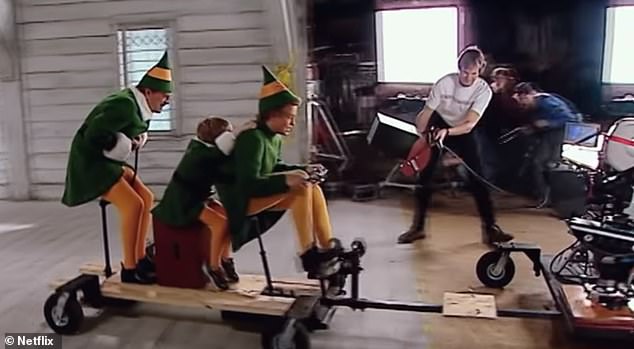 Meanwhile, another child sat in the middle, and it’s his hands the viewer sees on child-Buddy’s shoulders

Director Jon Favreau didn’t want to use digital effects for the movie, so when it came to filming scenes at the North Pole — where things needed to take on a more magical quality — the crew had to get creative.

They used forced perspective, a cinematic trick that hasn’t been used much in decades, to make Buddy the Elf look much bigger than all the other elves.

In once scene, Buddy sits on tiny Papa Elf’s lap, with Papa Elf’s little legs poking out from under Buddy’s big ones.

To do this, they had actor Bob Newhart sit on a chair ten feet behind Will Ferrell. A child laid down between them, his little legs playing the part of Papa Elf’s legs.

In a flashback scene, Buddy is shown as a child, riding around on a bike with Papa Elf behind him. To shoot that, they had Bob sit several feet back again — and hid another child between him, whose hands gripped Buddy’s shoulders and appeared to belong to Papa Elf. 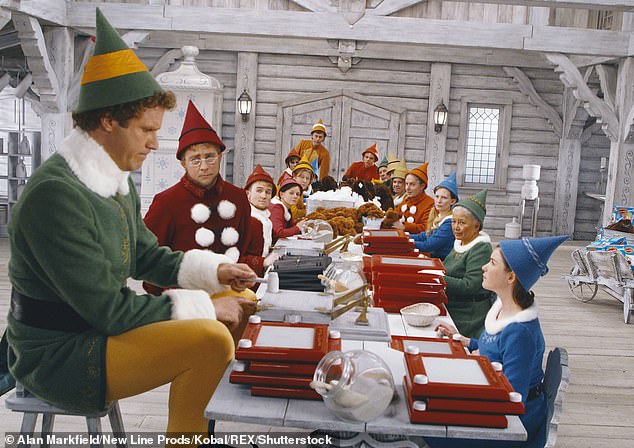 Brr! The North Pole was filmed on an ice rink in Vancouver, Canada

The North Pole was filmed on a hockey rink

The crew spent just 13 weeks filming in New York to get the scenes they couldn’t fake in other locations — then moved to Vancouver, Canada, where it’s much less expensive to film.

Most of the work was done on sound stages, but those weren’t wide enough to create the North Pole.

So they moved to a public access hockey rink, which is where they built Santa’s Village. 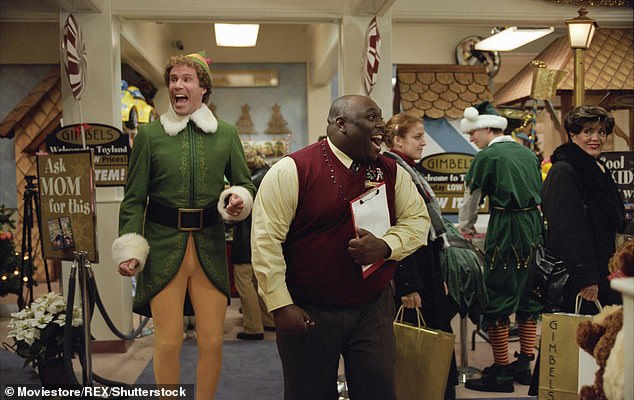 A shock: A ‘creepy,’ ‘Draconian,’ closed-down mental institution served as the crew’s filming location for many of the indoor New York shots

More filming was done in an abandoned mental institution

A ‘creepy,’ ‘Draconian,’ closed-down mental institution served as the crew’s filming location for many of the indoor New York shots.

These included the police station, Buddy’s orphanage, Greenway Press, and the Hobbs’ apartment, all of which were transformed to look unrecognizable.

January 13, 2020 Will Be The Best Week For These Zodiac Signs