Home » Lifestyle » Nevermind the recession: Government has to find the right policy

The soundtrack to Australia's last recession was provided by two of the greatest albums of all time.

As unemployment soared and businesses shuttered through 1991, Kurt Cobain and his band Nirvana delivered the world the bleakness and raw pain of Nevermind. Two months later, U2 re-invented itself by releasing Achtung! Baby. 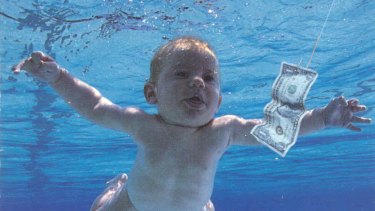 Nirvana released Nevermind during Australia’s last recession. The album, along with U2’s Achtung! Baby, left a major mark on music. The recession of 1991 left its own long-term mark on the economy.

They were pieces of long-lasting musical brilliance. The last recession was almost as enduring as it scarred the economy for at least a decade.

Unemployment had been 5.8 per cent just ahead of the recession but did not return to that level until August 2003. The Victorian and South Australian economies contracted for two consecutive years.

For almost three decades since the disaster that was the 1990-91 recession, Australia avoided succumbing to another. That run of good policy and good luck has ended.

Today's national accounts are far, far worse than anything thrown up by the last recession. Of any recession. Only the second full year of the Great Depression, when academic estimates of GDP suggest the economy shrank by 6.7 per cent in 1931 and unemployment headed towards 20 per cent, is comparable.

Household consumption, which underpins more than 56 per cent of economic activity, collapsed by a record 12.1 per cent. Spending by consumers on transport services fell by an astounding 85.9 per cent while expenditure on cafes, hotels and restaurants dropped by a mind-boggling 56.1 per cent.

More worrisome was the fall in non-mining business investment which slumped 6.9 per cent. Home building slipped 6.8 per cent alone and, notwithstanding government efforts to encourage construction, the closure of Australia's international border means our traditional get-out-of-jail card of population growth can't be played.

Treasurer Josh Frydenberg has spent the past weeks berating the Andrews government for its mismanagement of hotel quarantine and coronavirus case tracing while demanding a pathway out for Victorian business.

But in five weeks' time, the shoe is on the other foot. Frydenberg has to set out the federal government's plan to rebuild the national economy. 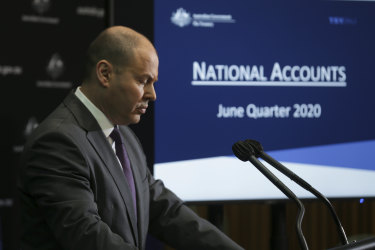 Treasurer Josh Frydenberg says the government will focus on redtape reduction, tax relief and industrial relations reform to grow the economy out of its deepest recession since the 1930s.Credit:Alex Ellinghausen

Red tape and IR reform and tax cuts are all part of the government's plan. But evidence from the past two decades suggest diminishing returns from all three of these policy agendas.

Frydenberg on Wednesday argued that "without great cost to the budget", a new wave of economic growth could be unleashed. Given this government has been in office since 2013, such a policy agenda should have been in place before running into the worst economic downturn since the Great Depression.

The biggest saving grace is households are cashed up. Household savings are at their highest since 1974.

The Treasurer has to find a way to encourage households into opening their collective wallets. The future employment of millions of Australians depend on it.

Prime Minister Scott Morrison has said to get the budget back on track will require economic growth at least a full percentage point above trend growth for five consecutive years.

The last time that occurred a band called The Beatles had just released perhaps the greatest album of all time, Sgt. Pepper's Lonely Heats Club Band.

Olivia Culpo teams her bikini with over $23K in jewelry

Camille Billops, Who Filmed Her Mother-Daughter Struggle, Dies at 85