Hanson Construction Materials' application to expand its quarry at Brandy Hill, inland from Port Stephens on the Mid North Coast, over 25 years was approved by the NSW government in July. 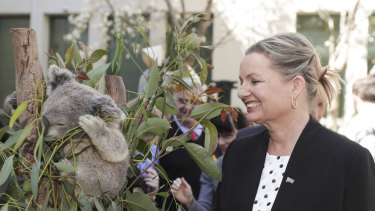 International and local environmental groups have waged a high-profile campaign against the project, which they say will further reduce valuable habitat and add unnecessary stress to koalas.

Ms Ley assessed the project under the Commonwealth Environment Protection and Biodiversity Conservation Act, which requires federal oversight of threatened species such as koalas.

Announcing federal approval had been granted on Tuesday, she said Hanson would be required to establish 74 hectares of new koala habitat, incorporating a mix of important habitat trees needed by koalas for a healthy diet. This is on top of a NSW requirement for 400 hectares of habitat to be acquired and held in perpetuity to offset the expansion.

Ms Ley said the development conditions imposed on Hanson meant the area would not be robbed of critical koala habitat and would actually deliver a "net gain for local koalas by providing better quality habitat than is there at present".

But Greens environment spokesperson senator Sarah Hanson-Young said the approval was "bad news" for koalas. "The minister's attempt to spin the benefits of an 'offset area' to sugar-coat her decision is insulting," she said.

Koalas are under unprecedented threat from habitat loss, with the 2019-20 Black Summer bushfires burning 25 per cent of the state’s remaining koala habitat.

"My message to the federal Environment Minister is, 'You should be looking very closely at this Brandy Hill decision because a lot is turning on the decision you will make'," Mr Kean said last month.

Ecological consultancy Biolink assessed the site on behalf of the federal government, measuring koala activity at regular intervals across 640 hectares and conducting spotlighting searches on three non-consecutive nights. The spotlighting covered an area of 29 hectares and did not directly observe any koalas.

However, male koalas were heard calling at night, one of which was subsequently located. With the exception of two koala high-use areas located towards the southern edge of the site, activity elsewhere was mainly comprised of old scat (which are hard to distinguish from possums when not fresh).

The study estimated up to 18 koalas could be present in the 640 hectare zone, with up to two in the 52 hectares of habitat that would be removed.

Biolink principal consultant Dr Stephen Phillips said the population estimate was based on the available evidence of koala presence coupled with projections of the population density that could be supported by the local habitat.

Dr Phillips said the best habitat was located on the southern areas of the site, where the new habitat was to be established. It could become suitable for "core koala habitat" that would be able to support a resident, breeding population, he said.