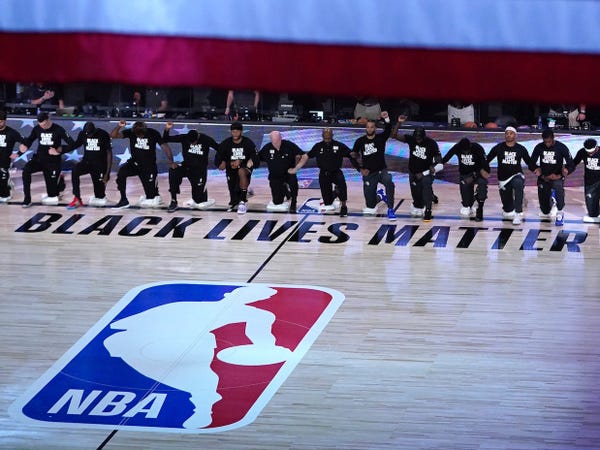 The remainder of the 2020 NBA season is hanging in the balance.

All three NBA playoff games scheduled for Wednesday night have been postponed after players from the Milwaukee Bucks, Houston Rockets, Oklahoma City Thunder, Los Angeles Lakers, and Portland Trail Blazers chose not to play to in protest of police brutality. Rather than canceling the games outright, the league announced that it would reschedule each matchup later.

But the NBA's plan to continue with the season is contingent upon players agreeing to forge on with play in the NBA's bubble at Walt Disney World in Orlando, Florida. According to ESPN's Zach Lowe and Adrian Wojnarowski, players across the league are set to meet tonight to discuss the future of this year's playoffs. One veteran in the bubble told ESPN that "the season is in jeopardy."

The players' decision to boycott the playoff games comes after protests erupted around the country in light of Sunday's police shooting of Blake, an unarmed Black man whom Kenosha, Wisconsin, officers shot in front of his three children. Blake survived and is in stable condition despite taking seven bullets to the back, but the 29-year-old is now paralyzed from the waist down.

Players across the NBA spoke out almost immediately after a horrifying video of the incident circulated online. Talks of protests and teams potentially missing their upcoming playoff matchups started up shortly thereafter, with stars in the NBA bubble at Walt Disney World describing feeling trapped and helpless as social unrest has returned to the conversation's forefront.

The Milwaukee Bucks kicked off the players' strike by refusing to play their playoff game against the Orlando Magic Wednesday afternoon, becoming the first team to take such significant measures. Players for the Houston Rockets, Oklahoma City Thunder, Los Angeles Lakers, and Portland Trail Blazers all followed suit shortly thereafter.

"We're tired of the killings and the injustice," Bucks guard George Hill told The Undefeated after the game's designated start time.

Whether or not the games scheduled for Thursday and beyond will continue as planned remains to be seen. Teams choosing to boycott Wednesday's contests will not be charged with forfeits, but it is still unclear if the already-derailed season will continue.

Woman, 50, says the magic of fairies keeps her looking young

Which Wayans Brother Sibling Has The Highest Net Worth?