National cabinet will urgently discuss coronavirus testing requirements around the country as daily case numbers soar towards 20,000 ahead of New Year’s celebrations. 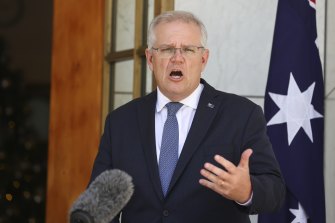 More than 18,000 cases of coronavirus have been confirmed around the country so far today. That figure does not include the ACT, which recorded 252 cases yesterday, and it also does not include figures from West Australia or the Northern Territory.

South Australian Premier Stephen Marshall said the state could not continue pre-departure tests for interstate travellers, after the state recorded 1471 cases on Wednesday. He said Thursday’s national cabinet meeting will have a big update testing and how it will be used in the country into next year.

“We will be looking to adopt nationally consistent test, trace, isolate and quarantine protocols right across the country. There is still some disparity which is causing confusion, and as we move through various stages of this new Omicron variant, we do need to move towards standardisation as much as possible,” he said.

“We’ll also be getting a very significant update with regards to the rapid antigen test, its use in Australia, its availability in Australia and how we’re going to proceed going forward.”

States have been struggling to secure supplies of rapid antigen tests and have to compete in a tight global market as the federal government refuses to buy kits for widespread use despite public health experts saying they are vital in fighting the pandemic.

The country’s leaders are also yet to outline national guidelines for using rapid antigen tests after committing to work on a plan in November as pathology systems around the country continue to buckle under the strain of PCR testing demands.

NSW has secured 20 million rapid antigen tests, and Victoria announced on Wednesday morning it had purchased 34 million of the kits. NSW Health Minister Brad Hazzard told this masthead sourcing the tests had been a challenge.

Opposition leader Anthony Albanese said the federal government had failed to take leadership when it comes to rapid antigen tests.

“Scott Morrison has left Australians dangerously exposed and right at the back of the queue over the course of the last couple of days,” he said on Wednesday morning.

“Yet again, we’ve seen state governments having to fill a vacuum left by Scott Morrison who has gone missing in the fight against this critical fourth wave.

“State and territory governments have stepped up in the absence of Commonwealth leadership. But when we talk about purchasing of rapid antigen tests from overseas, it clearly is a federal government responsibility.”