Home » Lifestyle » My friend has cancer, but who’s complaining? Her husband

A friend, M, has cancer. She was in St Vincent's having her first chemo treatment and sent me the following story episodically, via text, as a vicious cocktail nicknamed "The Red Devil" drained into her arm. Her husband Artie, bored with the drip, drip, drip, went out and bought himself a pair of chocolate-coloured suede loafers and a Paul and Shark bomber jacket.

Upon his return he paraded up and down showing off the new clothes before making himself a toastie. Then he ate all the free biscuits he could and filled the pockets of his new jacket with the remainder. He drank juice and tea and complained this whole IV process seemed too slow. Could it be accelerated? "Don't you dare squeeze that bag," the nurse warned.

He asked her to take his blood pressure, seeing as he was here, at a loose end. She looked at him, then decided to ignore him. So he upped the ante by saying he felt woozy. Eventually, huffily, she took his blood pressure. He became grumpy when it was normal. It didn't feel normal. Probably she was a dud nurse using a dodgy sphygmomanometer.

He began to wander the ward, sniffing for tidbits like an airport beagle for meth, and found a homemade caramel slice in the fridge. Gone in a trice. There was a hullaballoo when its disappearance was discovered, because it had been a birthday gift for the nurse.

People initially assumed a man who had hogged so many biscuits couldn't have eaten a slice as well. But when the nurse eventually confronted Artie he said he thought it was sustenance for caregivers. She asked him, in her coldest tone, if he considered himself a caregiver.

Next he complained his chair was uncomfortable. M's chair looked way comfier. "OK," M said. "We'll swap. You have my chair." His little eyes lit up. "Just try it," the nurse threatened.

After this he complained the hospital was too cold for him to sleep and put on the new cashmere beanie M had bought for her hair loss. He found a stool to put his feet on, which allowed him comfort enough to snore a little while the poisons oozed into his wife's arm.

As he slept she sent me this:
We are here
To laugh
At the odds
And live our lives
So well that
Death
Will tremble
To take us
Charles Bukowski. 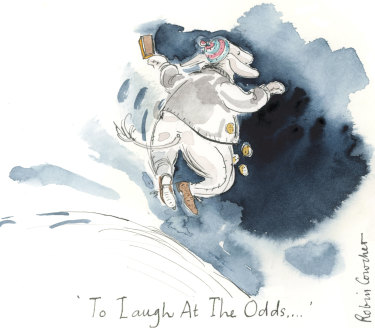 She suggested we might start a crowd-funder to get Artie a new, more comfortable, chair at St V's. He'd recently had a flu shot and was suffering a slightly reddened area about the size of a five-cent piece. When he woke he began pestering the nurse to check it out and maybe give him something for it.

The Red Devil continued to drip while the nurse stuck a Homer Simpson band-aid on Artie's impoverished bicep. When she left the room he told M he thought the nurse might be a smartarse.

Later, when a doctor told M that the Red Devil chemo might turn her urine red for a few days Artie squealed, "I better check mine". And rushed off to the toilet. He came back crestfallen to report it normal and sat sulking in his chair. His blood-pressure regular and his urine anodyne … he was having a rough day.

As he fretted over his flawless wellbeing, M texted: "One awesome thing about Eeyore is that even though he's basically clinically depressed, he still gets invited to participate in adventures and shenanigans with all of his friends. And they never expect him to pretend to feel happy; they just love him anyway, and they never leave him behind or ask him to change."

On the way out of the hospital she made Artie unload the biscuits from his new jacket. He would have argued, she reckons, but bald patients were staring and he didn't, quite, have the heart to.

One bout of chemo down and 14 to go. New journeys aren't easy. I'm sure Artie will settle into his role as caregiver soon. I understand his initial failure. When my wife first had cancer I was a ward dolt too, and she laughed at me. Humour is our only defence against mortality in this vale of tears.