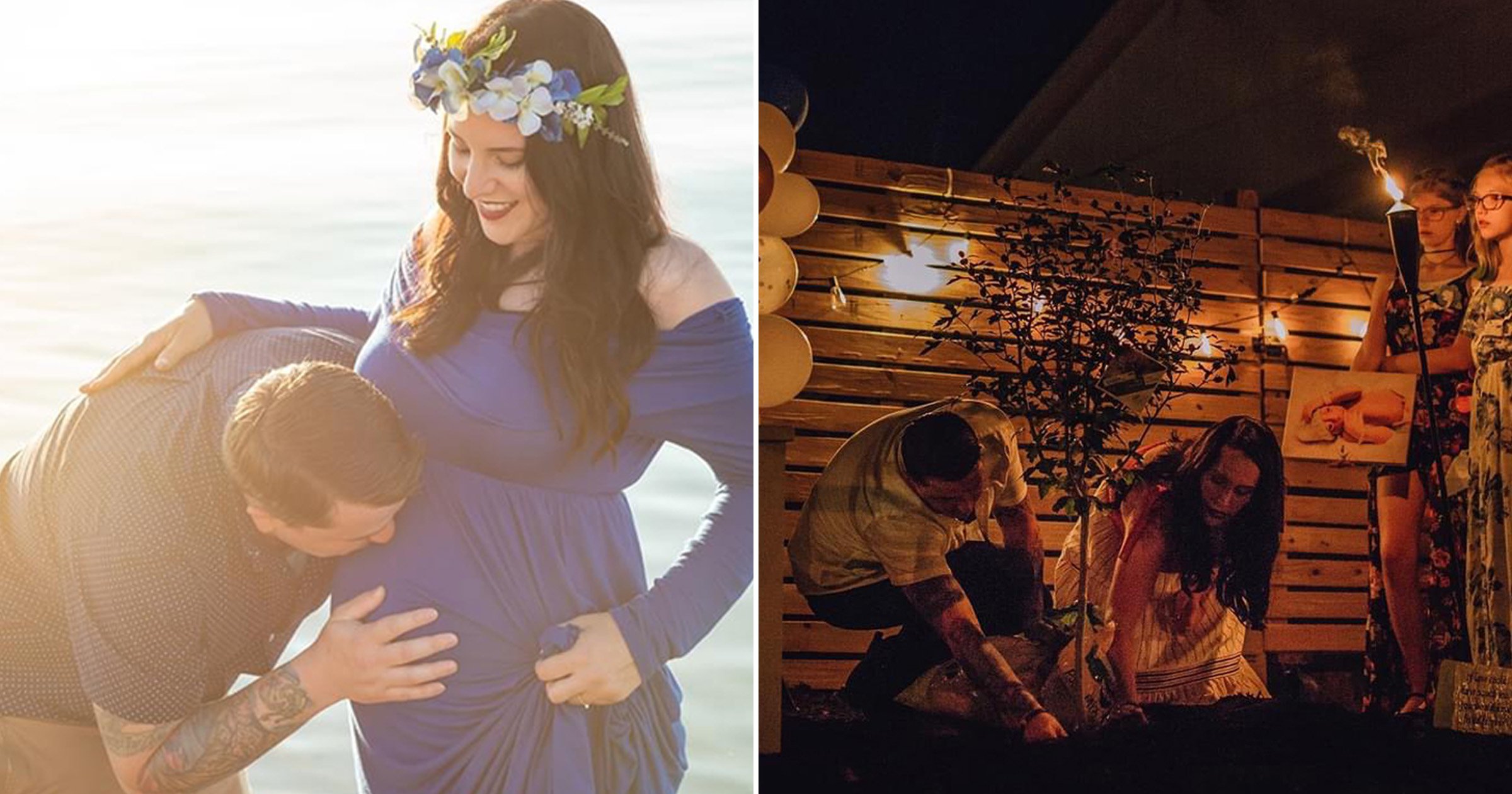 A woman has shared how donating her breast milk for eight months after her baby son was stillborn made her feel closer to him.

The 27-year-old expressed her milk after giving birth to Ambrose, who had died in her womb, and gave it to other mums in need.

Alyssa, from Ohio, US, said: ‘It was selfish of me really, not selfless. Donating my milk was a way of feeling close to Ambrose.’

The teacher hadn’t planned to have kids – as she was already very happy as a stepmother to her husband’s daughters, Liliel and Jocelyn.

However, she found out she was pregnant at a seven-week scan.

Alyssa added: ‘It was amazing. We told the kids at the 14-week mark, as we wanted to get out of the first trimester when miscarriage rates drop to very low levels.’

However, her 22-week anatomy scan was a very different story. The mood in the room was very different and Alyssa heard the technician checking everything whisper ‘come on baby’ as she took the measurements.

Alyssa said: ‘She talked to me about the baby’s spine and arms and legs, but I noticed she was avoiding the head. I wanted to ask why, but I suppose I was scared.

‘I’d asked if I could patch my husband in on video chat, but she said “no.” She did tell me the baby was a boy, so I was excited about that and couldn’t wait to tell Tyler and the girls.’

Alyssa was then taken to see a doctor.

She continued: ‘He said, “Well, I have some bad news about the baby. There is no sign of a cranium, which means when he is born, he will die.’”

The doctor explained her unborn baby had anencephaly, which meant the brain and spinal cord had not developed properly and a large part of the skull and brain were missing.

With no available treatment, most babies with anencephaly are stillborn and those that survive the pregnancy die shortly after birth – on rare occasions living for a few days.

After seeing a few specialists, Alyssa told doctors that she wanted her baby to be born alive, so that her husband, Tyler, could hold him.

For the best chance of this, the couple booked a C-section for 37 weeks. They also created a bucket list for their unborn baby, to make some memories.

But in early August 2020, Alyssa couldn’t feel him kicking anymore

She said: ‘He was normally so active and always had his toes in my ribs. I told myself he was just tired but, after a couple of hours, we went to the hospital for a scan and the technician couldn’t find a heartbeat.’

The couple decided to stay put at the hospital and induce the birth.

Ambrose was born on August 6 2020, after a 48-hour labour, which Alyssa says felt like a normal birth.

The couple’s families came to meet him and, thanks to a specially designed cuddle cot, Alyssa and Tyler were able to spend 36 hours with their son.

As well as having him cremated next door to the chapel where they were married, Alyssa and Tyler sent out a birth announcement to family and friends and arranged a memorial for him in the garden at their home.

She added: ‘The hardest part was leaving him at the hospital. I remember holding his hand for the last time and trying to take in every detail of him, from the back of his knees to his face.

‘What losing Ambrose made me realise is that you just don’t know what side of the statistics you will be on.’

In the eight months following his death, Alyssa expressed 4,000 oz of breast milk to the Mother’s Milk Bank – something she felt helped her through.

Now Alyssa is 14 weeks pregnant again – with no detectable health complications. However, she will never forget the little boy she lost.

She said: ‘Ambrose will always be part of our family. I will tell his brother about him.

‘In fact, the biggest fear of my life is not hearing his name spoken out loud again.’