A mother who ‘lived with a monster’ for 10 years has revealed the horrific injuries he inflicted upon her and the lies she told to cover it up.

Shar Grace Hounley, 34, from east London, spent a decade in a physically and emotionally abusive relationship with her ex-boyfriend.

In 2018, after a campaign of abuse against Shar which lasted for a decade, he was convicted of beating her and spent three months in prison.

Although Shar is grateful he was jailed for what he had done to her, she believes the justice system has ‘a long way to go’ before it is fully supportive of women who have been subject to male violence. 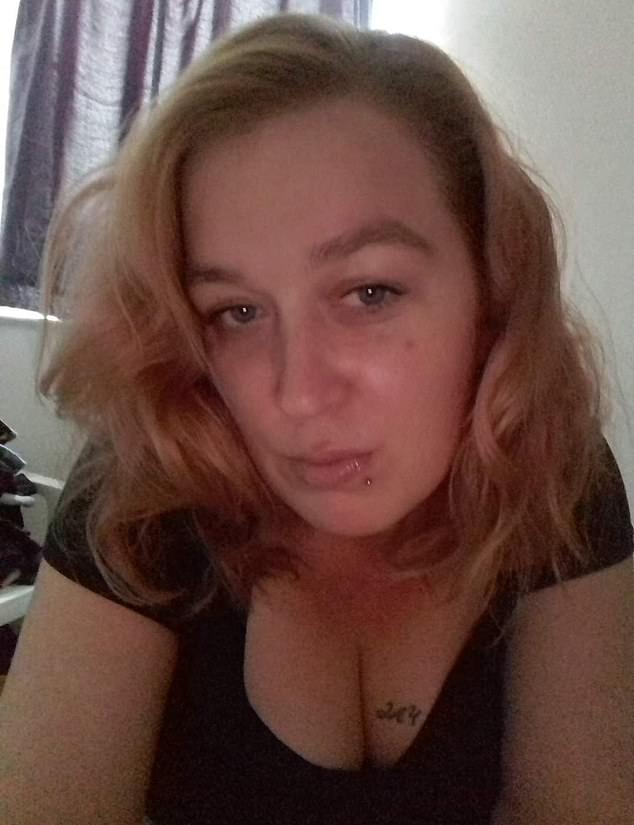 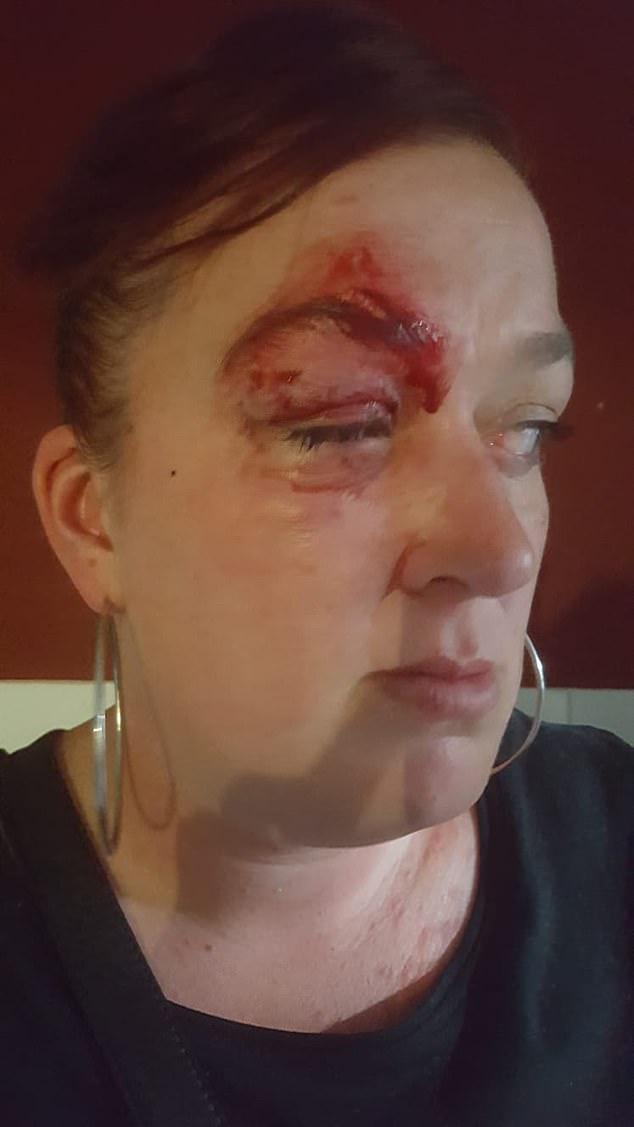 Shar Grace Hounsley, 34, bravely posted these photos to show the extent of the domestic violence she suffered at the hands of her partner

She told FEMAIL: ‘Yes in 2018, I got a conviction for my abuser, but he was out after three months. It doesn’t feel right after the years of what he put me through.

‘Most women don’t get a conviction and the ones who do, often feel like it’s not enough.

‘In one sense I’m really happy I wasn’t another statistic, and they saw me and heard me – but our justice system is weak.

‘They saw the physical side but didn’t look at the emotional side of the abuse,  which has given me all sorts of issues.’

After Shar’s long-term partner who physically and emotionally abused her for years beat her one last time over a sim card, she took to social media with pictures of her bloodied and bruised face. She had needed stitches above her eye. 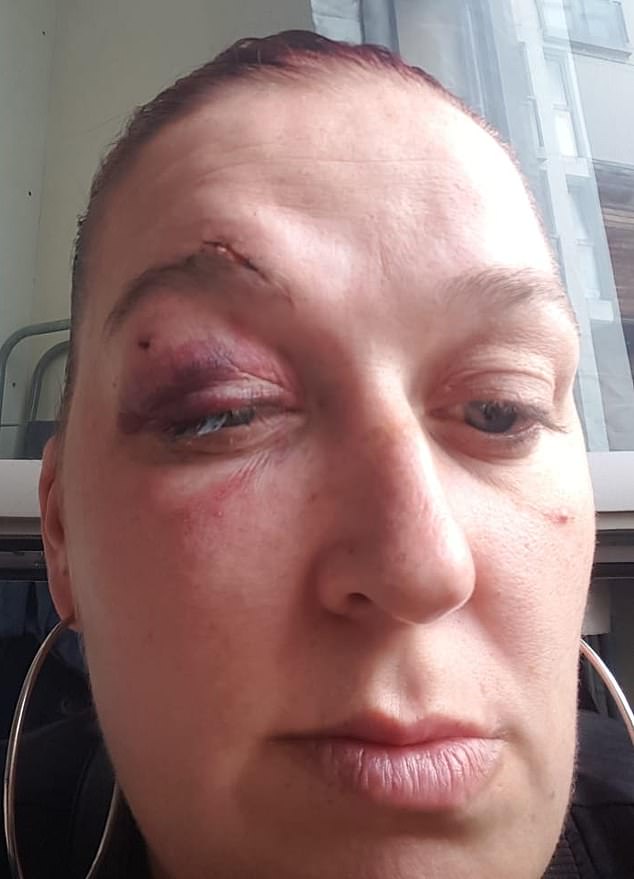 Shar after the attack when the facial wound was healing, she was still bruised and needed stitches above her eye 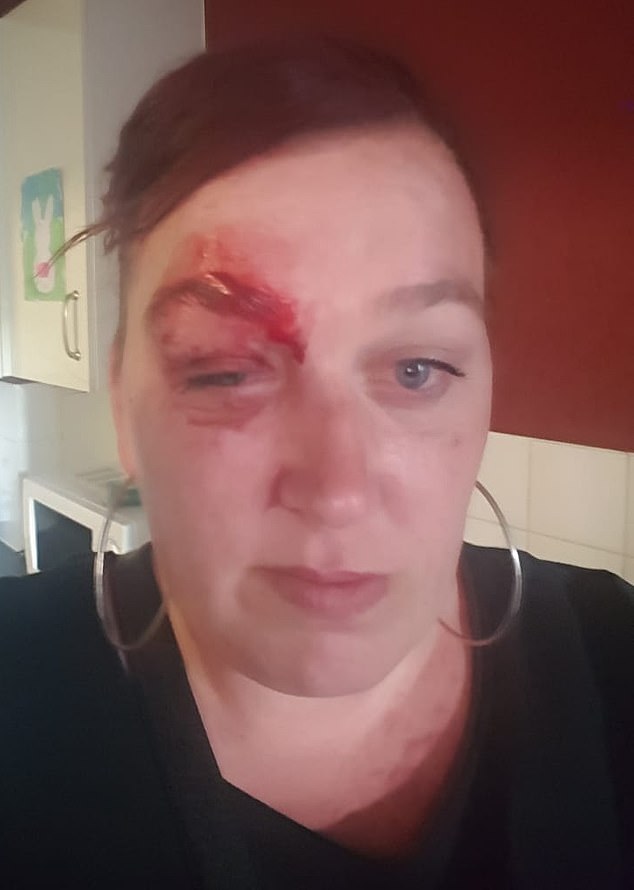 Shar decided to waive her right to victim anonymity to show the true, raw face of domestic violence to others

Her ex had physically abused her throughout their relationship, he threw a phone in her face and knocked out her front teeth, and beat her when she discovered that he was cheating on her.

The mother has been in hospital several times for her injuries and had to have one of her teeth extracted as a result of being hit.

She said: ‘When he hit me I would tell the classic lies, like I tripped over a skateboard or something but I don’t know if the doctors knew.’

Earlier on in the relationship Shar noticed her partner would love bomb her, he would compliment her all the time and tell her how beautiful she was.

Shar looks back on the first time her partner abused her.

At the beginning of their relationship her partner told her he was a devout Catholic.

He pressured her into converting to Catholicism despite her not wanting to and flew into a rage when she questioned it.

She told FEMAIL: ‘At first he claimed to be religious and wanted me to be confirmed in the Catholic church, but it didn’t feel right. 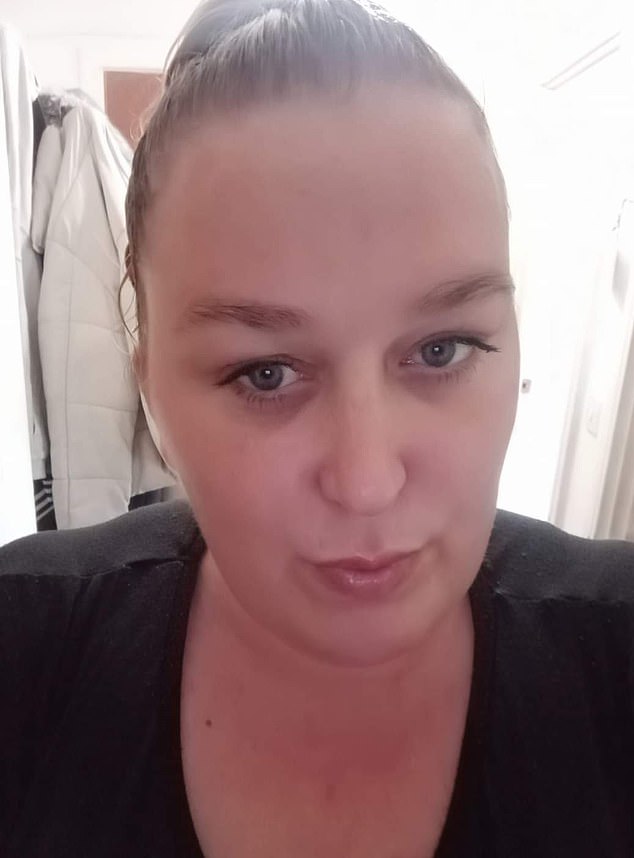 Shar now, happier and healthier but still suffers the after effects of what happened to her – she has now made it her mission to help other women and learn as much as she can about toxic relationships. She wants people to understand about the emotional side of domestic abuse too and how it can cause complex PTSD

What are the warning signs of domestic abuse?

In CBS Reality’s Uncovering Intimate Partner Abuse Dr Jane Monckton-Smith, of the University of Gloucestershire, reveals the early warning signs that a relationship will become abusive.

The forensic criminologist says that abusive relationships will start like a normal one, but always get very intense quickly.

She explained: ‘Perhaps they would declare love very, very quickly.

‘This can be interpreted as love and perhaps it is but sometimes people will try to move in with you very, very quickly. If somebody’s looking to live with you within weeks I would see that as a red flag.’

Sometimes abuse can begin when there is a big life change for the couple the relationship can become abusive, such as if the woman gets pregnant.

She explained: ‘Sometimes if there’s a pregnancy suddenly the attention isn’t on the abuser enough and they feel their needs are not being met so that can definitely be a trigger.’

Dr Monckton-Smith also said that subtle control tactics like asking you to stop seeing friends or wanting to spend every moment with you can be a sign of abuse.

‘He got very angry when I questioned it and that was the first time he abused me.’

Soon she was pregnant with his child and they were living together, but his treatment of her became nasty and he spent most of his time putting her down and criticising her.

Shar told FEMAIL: ‘He stopped complimenting me altogether and would comment on my weight, he would call me “fatty” and push me to the floor and laugh when I couldn’t get back up mocking me.’

Shar even made efforts to join Slimming World and lost several stone in a bid to feel better about herself but she said ‘the cheating and the lies continued’.

She said: ‘I did it for my health and my son, but he couldn’t stand me feeling better and being confident so the weight would pile back on.’

Over the years, she recalled the things her ex told her that didn’t quite add up.

She said: ‘He would lie about his success, and big up what he had done, even though I knew it wasn’t true.’

Shar now believes she was with a narcissist and has made it her mission to learn as much as she can about the disorder and support other women in the community on online and WhatsApp groups and is a sounding board for anyone going through the same – whilst being a full time mum to an autistic son.

She said: ‘I want people to know all the little details, if someone is moving too fast to be with you or wanting to move in.

‘It’s even in the shows they watch.’

Shar is now thriving and has lost the excess weight that stopped her ‘running around with her son at the park’ but still suffers the emotional after effects of the abuse.

She is now wary of toxic relationships and wants to warn others to get out if they feel their partner is ‘too into them’ or ‘wants marriage and children quickly’.

Her biggest message however is to the justice system. She said: ‘I think the system can be lenient towards abusers.

‘I didn’t even know my abuser had been released, which they should have told me. You can live in fear if you know they are free and there is no restraining order in place.

‘I want the system to recognise the long-term impact abuse has on the victim. How you can develop complex PTSD and anxiety, it’s not all about the physical side.’

If you suspect you are being abused contact Women’s Aid via their website  or if you are in immediate danger call 999.

Recognising the warning signs of NPD: The character traits commonly associate with narcissism

Learning How To Leave: A Practical Guide To Stepping Away From Toxic & Narcissistic Relationships by Michael Padraig Acton reveals common narcissistc traits. Not every below trait has to match for a person to be considered a narcissist.

Olivia Culpo teams her bikini with over $23K in jewelry