Home » Lifestyle » Mother, 46, slams Cadbury for chocolates 'barely the size of her toe'

Toe-tally disappointed! Mother slams Cadbury after £9.99 advent calendar leaves eight-year-old daughter with chocolates that are ‘barely the size of her toe’

A mother has been left ‘bewildered’ after the luxury advent calendar she bought her eight-year-old daughter came with chocolates ‘barely the size of her toe’.

Anna Devlin, 46, from Winchester, Hampshire, bought her daughter Kitty a chocolate calendar at the end of November.

Kitty eagerly picked out out a £9.99 Cadbury 3D box and anticipated ‘some decent chocolate’, but when 1st December rolled around, she was disappointed to find small variety-sized bites instead.

Jokingly recalling the classic 80s ‘finger of Fudge’ TV advert, Anna then suggested it was ‘barely a toe’ before snapping a picture of her daughter’s foot next to the sweet treat. 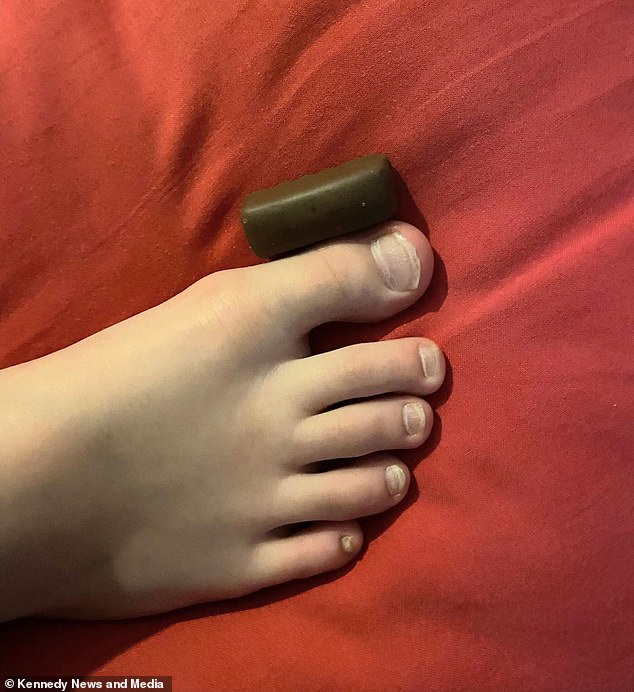 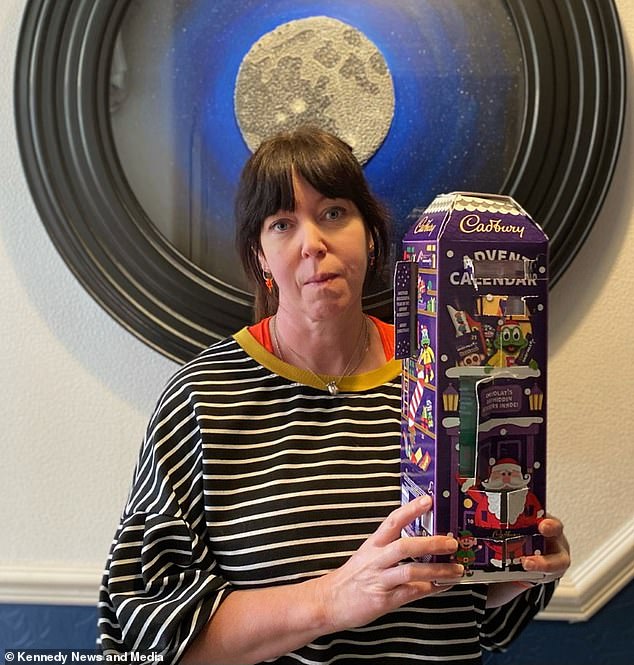 Anna Devlin, 46, was left ‘bewildered’ after buying Cadbury’s 3D box advent calendar for £9.99 but only getting miniature chocolate classics 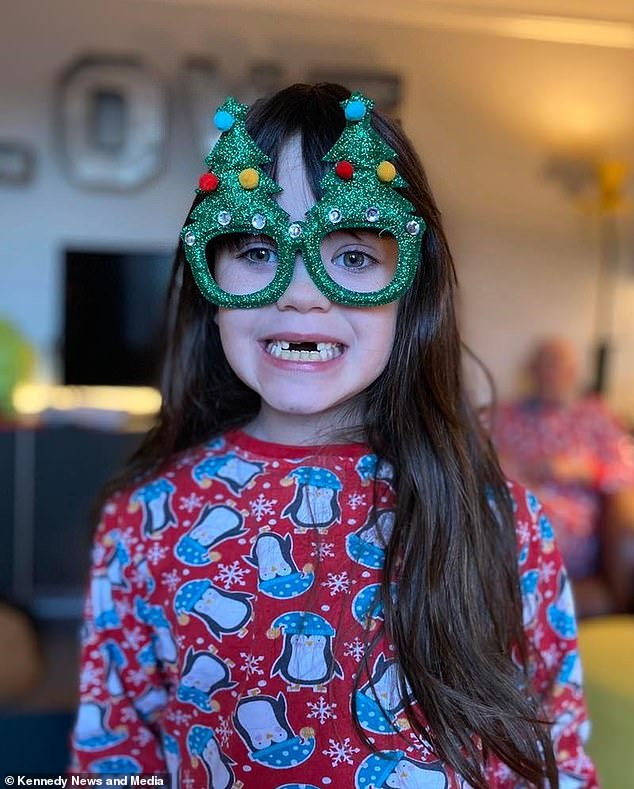 Anna’s daughter, Kitty, eight, waited patiently until December 1 to open her advent calendar before being left ‘disappointed’ to find only tiny chocolate treats

The art teacher is now urging Cadbury to review their calendar and use bigger chocolates in future as she claims children have already ‘had a s*** few years’ and don’t need further disappointment.

Cadbury said they review the mix of chocolates in their advent calendars regularly to ensure customers get an ‘assortment of their favourites’, but there can be ‘some minor deviations in the mix due to manufacturing processes’.

Ms Devlin said: ‘We’d gone to look for an advent calendar. She likes a Freddo and it’s supposed to have Freddos in it – but not yet.

‘I imagine it might just be a frog leg or something.

‘I think she thought they [the chocolates] were going to be full size as the actual calendar is so big. She laughed at the size of the Fudge which is what started it all really.

‘The picture is a dig at Cadbury. It’s not a finger of Fudge – it’s barely a toe of Fudge – an eight-year-old’s toe at that.

‘The advent calendar is a big exciting part of my daughter’s Christmas and it looks big. 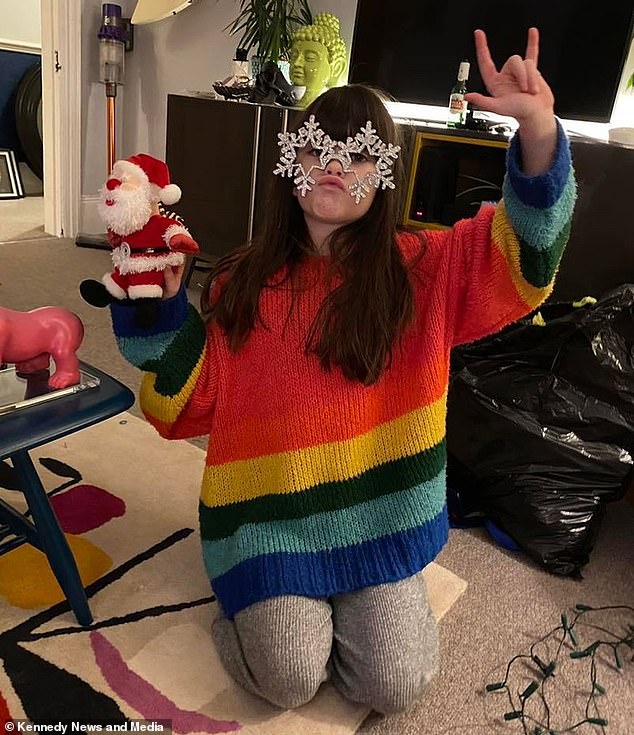 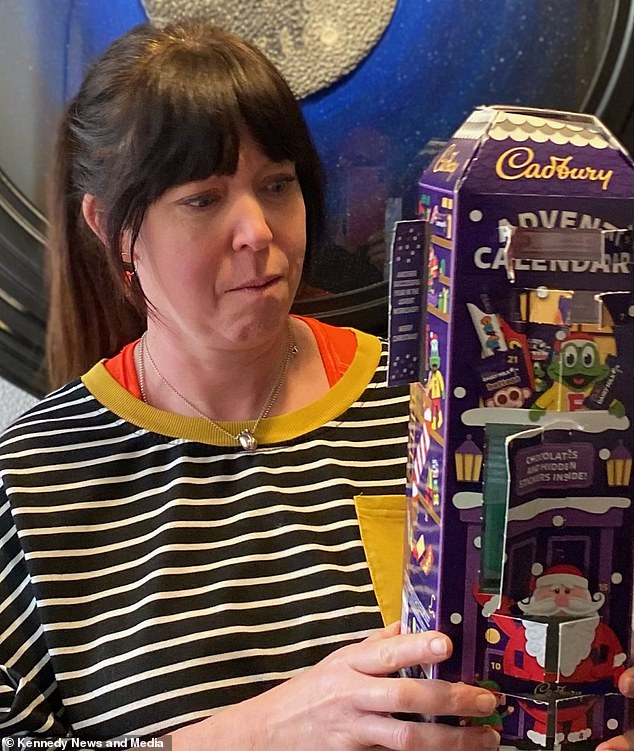 Bewildered: Ms Devlin, an art teacher, has slammed Cadbury and is now urging them to review their calendar and use bigger chocolates in future

‘Children are generally a little bit greedy and that’s what she wanted. She thought she’d get some decent chocolate every day and it’s s***.

‘They look substantial in the shops and they cost a tenner. I could have bought two or three tubs of Celebrations and she could have gorged herself on chocolate for that price.

‘The advert used to be “a finger of Fudge is just enough to give your kids a treat”.

Anna claims eager Kitty was further disappointed when she then received several of the same chocolate in a row, including three days of Fudge and then three days of Chomp. 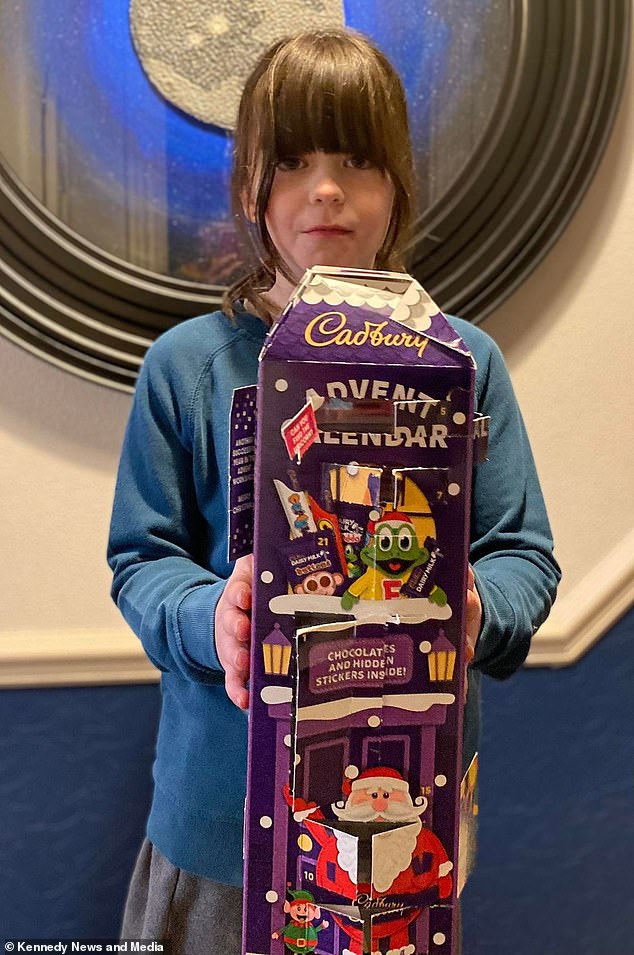 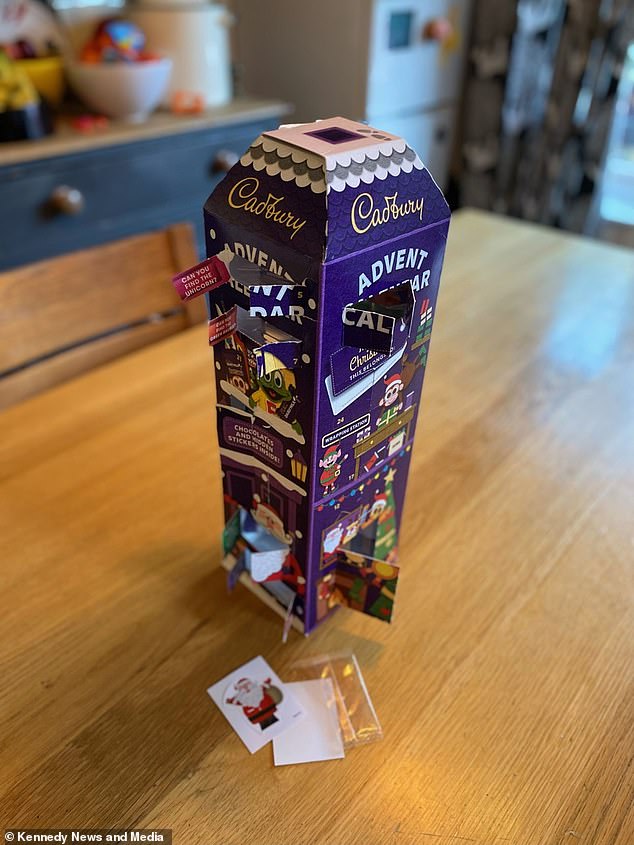 The Cadbury tower was priced at £9.99, and it was Kitty’s pick when she and her mother went to choose an advent calendar at the end of November 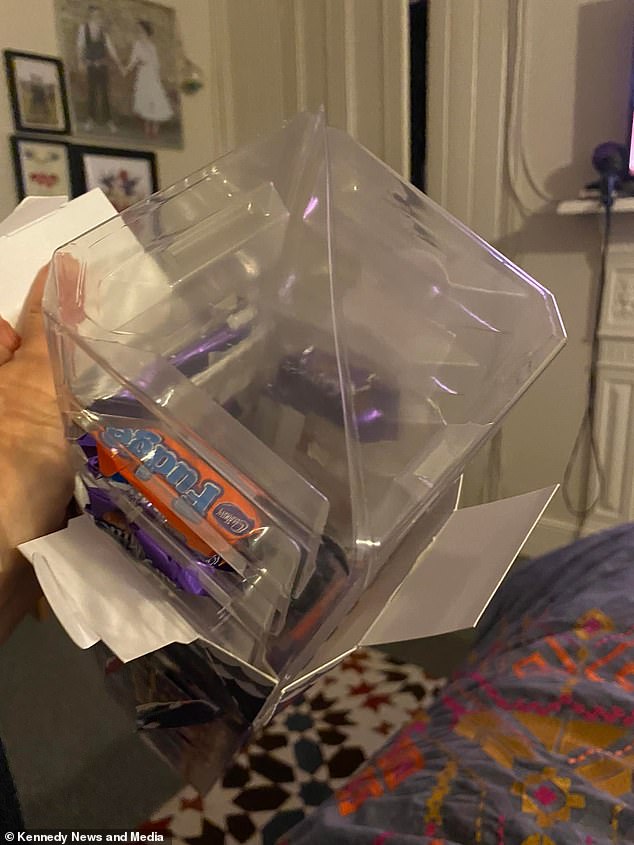 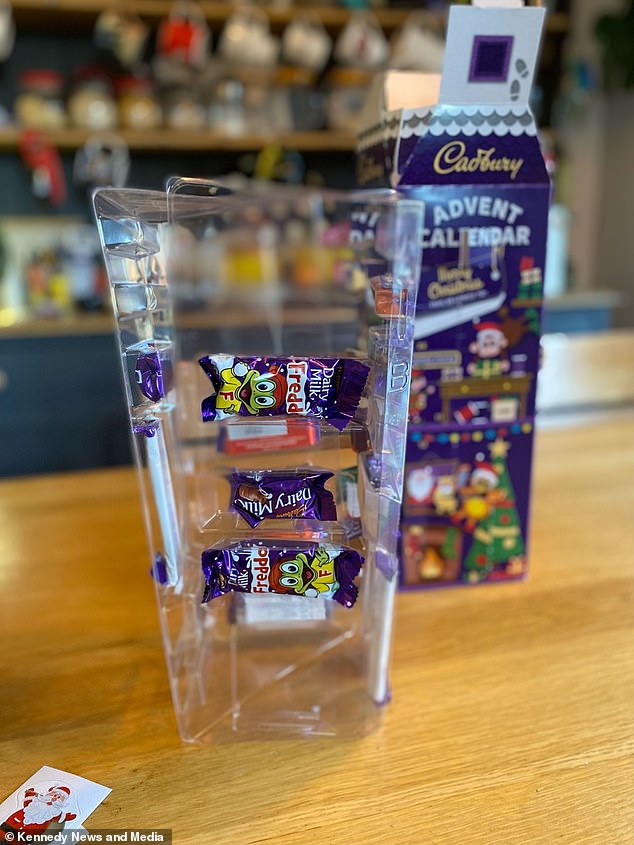 Cadbury said they review the mix of chocolates in their advent calendars regularly to ensure customers get an ‘assortment of their favourites’, but there can be ‘some minor deviations in the mix due to manufacturing processes’.

Anna said: ‘It’s a tower, it’s full of plastic. You can open the top to peer in and see what’s behind every day.

‘There’s a variety-size chocolate in each one which I expected, but I don’t think she did.

‘There was Curly Wurly two days in a row and on day nine we had a packet of Buttons and a really s**t sticker, that was also wrapped in plastic.

‘On Friday she had a nugget of Dairy Milk. She bit into it and said “Oh Mummy, it’s not hollow,” – as if she was gearing herself up for failure.’

After posting her complaint online, Anna claims several other people commented their own disappointment and has now urged Cadbury to be ‘more honest’.

Anna said: ‘Next year, Cadbury need to be more honest. That’s a lot of air that I bought. 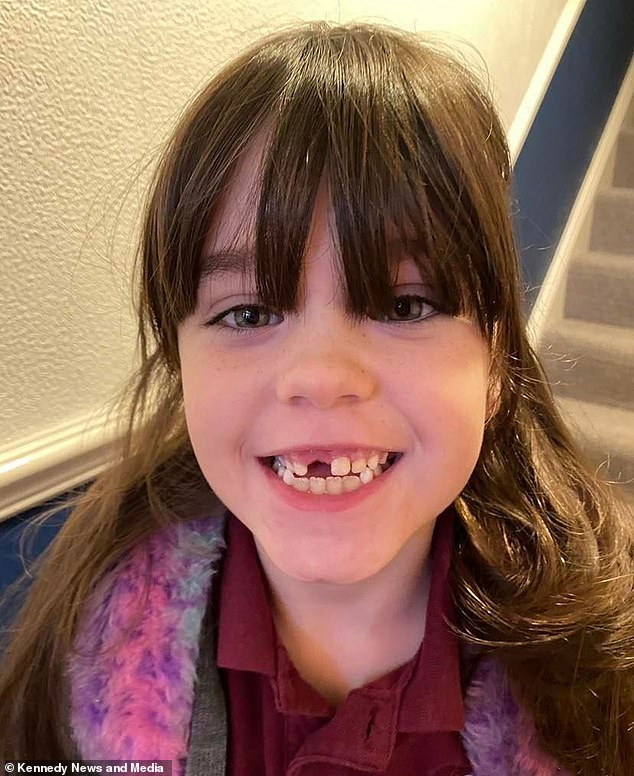 When Kitty Devlin, eight, opens each door of her advent calendar, mum Anna hears her say: ‘Oh mummy, it’s this one again!’ after getting the same chocolates a few days in a row 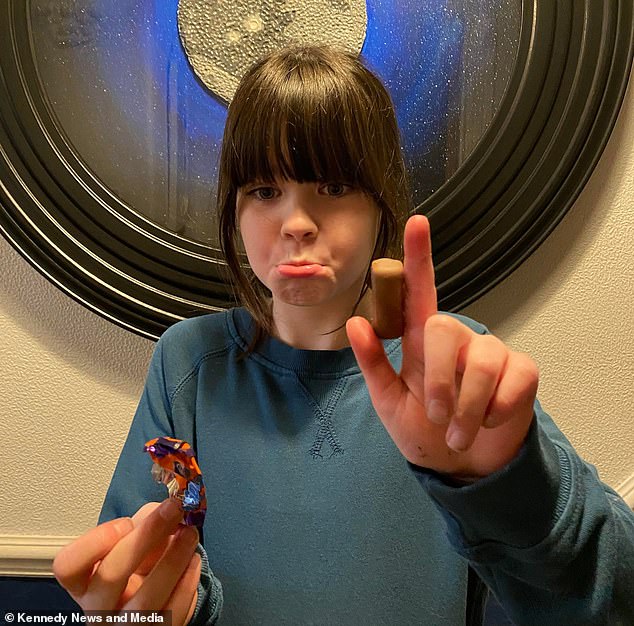 Kitty pictured sizing up the Fudge that came in her calendar, only making up for about half of her finger 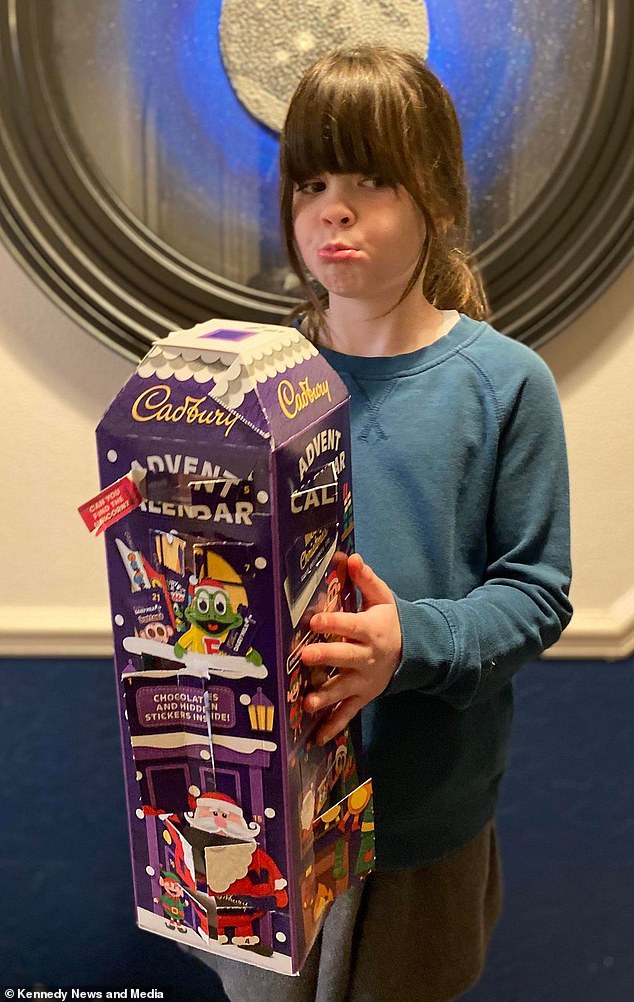 The look of disappointment: Kitty’s mum has said Cadbury’s needs to ‘avoid disappointing children’ after a ‘s**t few years with Covid’

‘They should avoid disappointing children – they’ve had a s*** few years with Covid.

Anna’s Facebook post reads: ‘Cadbury UK, very disappointed child with her Cadbury advent calendar, more like a Toe of Fudge, and only Curly Wurlys, Fudge and Chomp so far.

‘Day 9 finally got Buttons and one sticker.

‘A lot of plastic for not much product. She’s wishing she had chosen a different one and at roughly 40p per door so do I.’

On Facebook, George Sale commented that he had the same problem with selection: ‘We’ve got the same problem!! Nine days in – four fudges, four chomps and one dairy milk!’

Another user said: ‘Total s**** and wasn’t cheap either. Think I’ll get my own next year and fill it up ourselves…’

A Cadbury spokesman said: ‘Every year, we’re excited to share our Christmas products with our Cadbury chocolate fans. 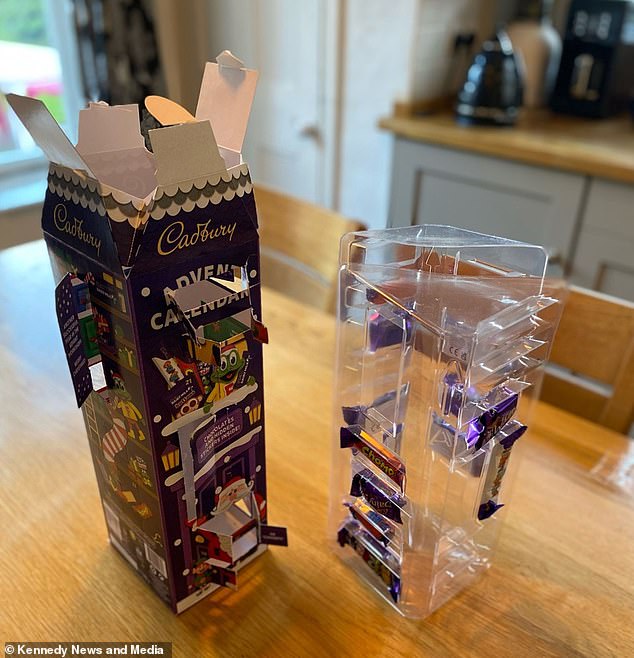 Where’s the rest? Mum Anna shared the pictures of her daughter’s advent calendar to Facebook where other users agreed that there was not enough inside 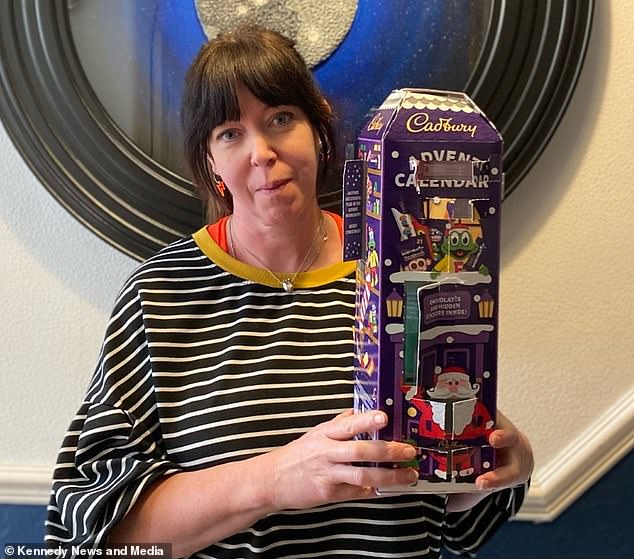 Social media users agreed with the lack of variation with the chocolate selection, as well as complaining about the price of £9.99

‘We review the mix of treats in our advent calendars regularly to ensure we are giving consumers an assortment of their favourites.

‘However, there can be some minor deviations in the mix due to manufacturing processes.

‘When it comes to the shape of our advent calendars, we love offering new and unique ways for our fans to interact and find their treats, ensuring that all include a fair and proper volume of the chocolate for all to enjoy.’

You Rarely See Jennifer Aniston's Hair Look Like This

Australia urged to boost vaccine orders as rollout picks up