As the Delta strain escalated our COVID experience to a new stage of national disruption, Scott Morrison has been under a form of political house arrest, driven by circumstances and choice.

The prime minister arrived back from his G7 excursion – which seems an age ago – on June 17. He spent a fortnight in quarantine at The Lodge (including joining the House of Representatives remotely) before going home to Sydney – already in lockdown – on July 2. 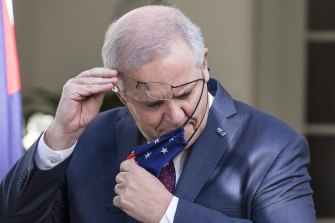 Since then, after several days absent from view, it’s been COVID-dominated Kirribilli news conferences, media interviews, and no doubt an encouraging word to Jen about the coming test of remote learning. Next week Morrison moves to Canberra – to quarantine for the parliamentary sitting that starts August 3.

Anthony Albanese took a different course. He hasn’t returned to Sydney since parliament rose. He hung around Canberra initially, then headed north for a swing through Queensland. He might be missing his son and his dog but he has covered a lot of kilometres.

On Monday of last week, he was in Toowoomba, in the electorate of Groom.

The following days saw him at Redcliffe (Petrie), Cairns (Leichhardt), Mackay (Dawson), and Gladstone (Flynn). He visited the seat of Griffith in Brisbane before going to Moranbah (Capricornia), where he went to a coal mine.

Returning to Brisbane, he took in Lilley on the way to the airport and a flight to Canberra this week – to avoid Sydney and so retain flexibility (although the country is now so closed, he’s running out of places to go).

Being confined during this winter parliamentary recess obviously doesn’t make any decisive difference for Morrison’s electoral fortunes. Nevertheless, it is interference to his campaigning.

The government makes the counterpoints that the opposition leader has nothing else to do but campaign, and anyway it’s a bad look to be away from your home city in its hour of need. 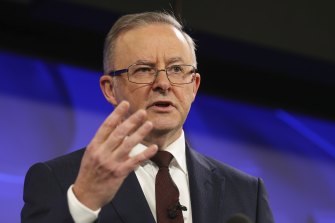 Opposition Leader Anthony Albanese during his address to the National Press Club of Australia in Canberra on Friday 2 July 2021.Credit:Alex Ellinghausen

Normally, Morrison would have used some of the winter break to be on the road, seen in several parts of the country, getting to out-of-the-way seats.

Instead, that work will have to be crunched into later. It all takes time. Morrison will be even more time-poor if he makes any of several possible trips overseas between now and Christmas – to the US, the East Asia summit, the G20, Glasgow. Also eating into time are the parliamentary weeks between now and year’s end.

Maximum seat-by-seat campaigning is especially important with the chaotic vaccine program, the Sydney lockdown and now a short one in Victoria all throwing curveballs into the political outlook.

Until relatively recently it appeared most likely that Morrison, like state and territory leaders, would have the strong advantage of “COVID incumbency” when facing voters, probably in March or May.

Even with a slow rollout, there seemed enough time to get the job done and for things to settle. Although the Coalition has been trailing or level in the polls, the government could feel reasonably confident.

But at the moment, lockdown upheavals, rollout confusion and community anger make any assumptions courageous.

An analysis published this week of Newspolls taken between April 21 and June 26 found two-party swings against the Coalition in every state except Victoria, with the biggest swings in Queensland and Western Australia.

The analysis concluded that if this were replicated at an election, the ALP could win majority government with 78 seats (in a 151-seat House).

This should be treated cautiously, even apart from any scepticism about polls. The election isn’t imminent. And translating general swings to particular seats is hazardous. For instance, on these figures Peter Dutton would lose his Queensland seat of Dickson. Yet what we know from the past suggests Dutton is well dug in there.

On the other hand, the Coalition’s seat numbers are at a high point in Queensland and Western Australia, making it difficult for it to look for any significant gains.

It’s no wonder Morrison, dubbed by his critics the “prime minister for NSW”, is pinning hope on gaining seats in his home state. Throughout the pandemic he has heaped praise on the Berejiklian government. In the Sydney lockdown, now extended for at least an extra fortnight, the federal government’s package for the state drew accusations from Victoria of “double standards”.

Anyway, NSW can no longer be celebrated for its model handling of COVID, and the state government is under criticism for the timing (too late) and nature (too soft) of the lockdown.

People might not be enthusiastic about Albanese’s Labor, but if the opposition picked off a few seats (in net terms), it would not take much to change the map. Think a hung parliament.

The chances of that might be statistically unlikely. But it wouldn’t be a total surprise – given the government is on a razor’s edge (current House numbers are Coalition 76 and Labor plus crossbench 75), and an unfavourable redistribution has scrapped a Liberal seat in Western Australia and created a Labor one in Victoria.

The election is unlikely to see any significant influx of independents (that’s not to preclude one turning up) but on present indications we could expect most of the current House crossbenchers to be returned (excepting Liberal defector Craig Kelly).

Politically, these crossbenchers are a mixed bunch and it would be fascinating to see how Morrison and Albanese matched off as negotiators, if they were in a 2010 situation.

A small event this week triggered a comparison between how Morrison’s political persona came across in the run up to the “miracle” election and his image now.

It was announced the charges against a woman alleged to have put needles into strawberries in 2018 had been dropped. Morrison turned the Great Strawberry Crisis into a dramatic national event, rushing legislation through at breakneck speed. This was more stunt than substance but it was all about portraying him as a man of action.

The action-man image was punctured before the vaccine debacle but the failures in this stage of a real crisis (after the earlier successes) are dealing him a serious blow.

In 2019 many voters actively disliked Bill Shorten; they found Morrison a more neutral figure, the man next door, not a world-beater but okay. Since then opinions have sharpened. Women look at Morrison differently from back then. The coating of teflon has many scratches. Albanese is now the inoffensive man next door.

With the rollout a battle, this week reinforced that Morrison is hostage to events beyond his control, struggling to respond to them, a leader forced to repeatedly change tack and lines, find excuses, slap on sticking plaster, spend more money. The package for NSW, announced on Tuesday, was followed on Thursday by a proposed “more simple and streamlined” set of arrangements.

The health challenge of trying to get in front of COVID’s Delta strain is formidable. Morrison finds the politics just as hard.

Dr Miriam Stoppard: The real art of living longer should begin in childhood