However, Morrison said he would take part in “any genuine process” that attempted to learn the lessons of the coronavirus pandemic while suggesting it should be extended to the states and territories. 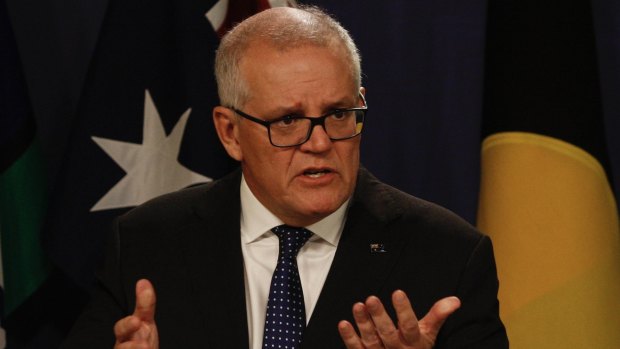 Former prime minister Scott Morrison says he will participate in a “genuine process” to learn the lessons of the pandemic, but stopped short of agreeing to Anthony Albanese’s snap inquiry into the ministries saga. Credit:Dean Sewell

In advice released on Tuesday, Solicitor-General Stephen Donaghue found Morrison had been legally appointed to the industry, science, energy and resources portfolio in 2021, but was highly critical of the lack of transparency and recommended the government fix the “deficient” disclosure practices.

“The end result is that, to the extent that the public and the parliament are not informed of appointments that have been made under [section] 64 of the Constitution, the principles of responsible government are fundamentally undermined,” he wrote.

Speaking after the release of the advice, Albanese condemned Morrison’s conduct and said the government would launch a further inquiry into the matter, which will be led by a yet-to-be-chosen legal expert.

“Scott Morrison owes the Australian people an apology for undermining our parliamentary democracy system of government that we have, something that can’t be taken for granted,” Albanese said.

Other key details about the inquiry, including whether it will have the power to compel witnesses to appear and who would be called to appear are yet to be finalised. But Albanese identified a raft of outstanding questions he still had about the matter, highlighting that it was not within the solicitor-general’s remit to examine how the events unfolded.

Donaghue’s advice focused on the one department where Morrison exercised powers as the resources minister to block the controversial “PEP11” gas exploration project. He found the appointment was “valid” as the governor-general, acting on the advice of the prime minister, has power under section 64 of the Constitution to appoint an existing minister to administer an additional department.

“The governor-general has no discretion to refuse to accept the prime minister’s advice in relation to such an appointment,” Donaghue said.

He said there was no “constitutional or legislative requirement” for the appointment to be notified publicly, but Morrison’s failure to alert ministers, the parliament, or the public was “inconsistent” with the conventions of responsible government under the Constitution.

In a lengthy response on Facebook, Morrison said “in the extraordinary circumstances I was contending with, decisions were made and then I kept moving forward” but conceded “in hindsight, some of these decisions will be reflected upon now and lessons learned”.

“I will appropriately assist any genuine process to learn the lessons from the pandemic. I would expect that any credible processes would also extend to the actions of the states and territories.”

Morrison re-stated his defence of his secret ministerial appointment, arguing it had been legal, that he had only exercised his powers once on the PEP11 gas project decision, the power had been exercised validly and that Australia’s pandemic performance was one of the strongest in the developed world.

“I accept that many Australians will not agree with, accept or understand all the decisions I made during those difficult times. I can only state that I took the decisions I did as prime minister with the best of intentions, in good faith and to do all I could to protect Australia in the face of multiple crises,” he said.

An inquiry that took in the role of state, territory and the federal government’s handling of the pandemic could take the form of a royal commission, which Albanese has previously indicated is likely to happen when the pandemic is largely over.

In the short term, Albanese directed the Department of Prime Minister and Cabinet and the Office of the Official Secretary to the Governor-General to publish future appointments of ministers to administer departments in the Commonwealth Gazette.

He indicated the government would legislate for this practice to be put into law, in line with a recommendation by the solicitor-general.

Albanese also played down the prospect of the inquiry examining Governor-General David Hurley’s conduct, including whether he had asked Morrison to make the appointments public.

“The governor-general has made that point clear in the statements he has made when he also said that there was no reason why he would think it would not be made public. Now, I think there are implications in that statement by the governor-general,” he said.

Shadow attorney-general Julian Leeser said the opposition would “work with the government on any reasonable proposals to provide clarity to processes and improve transparency in ministerial appointments”.

The Greens are pushing for the inquiry to have royal commission powers to compel witnesses including Morrison.

“Too many inquiries are announced to respond to pressing political pressure but don’t have the powers, scope or resources to get to the bottom of the problem and make the changes needed. That can’t be allowed to happen here,” Greens justice spokesman David Shoebridge said.

University of Sydney constitutional law expert Anne Twomey said it was “sensible” to have an inquiry into the matter, but said royal commission-style powers were probably unnecessary as it would likely be a straightforward fact-finding exercise.

“The real issue will be if they want to require people from outside government to give information or documents or provide evidence, then it’s probably going to be some kind of more serious inquiry with lawyers and former judges or barristers and procedures, and under some kind of legislation that gives coercive power,” Twomey said.

She said it would be inappropriate to call the governor-general before such an inquiry.

“If you were starting to ask about issues concerning confidential communications between the governor-general and the prime minister, you really would be getting into areas that were inappropriate to inquire into,” Twomey said.

Constitutional lawyer Greg Craven opposed an inquiry, saying Labor would be “very ill-advised to try and do this because they will be the next turkey on spit”.