As Indonesia reacts with alarm to Australia’s plan to arm itself with nuclear-propelled submarines, Prime Minister Scott Morrison’s plan to stop off in Jakarta on the way back from Washington next week was cancelled after President Joko Widodo was not available to meet.

Mr Morrison originally planned to visit Indonesia’s President, known as Jokowi, on the way back from Washington after having his first one-on-one meeting with United States President Joe Biden. But once Australian officials went to confirm the timing of a Jakarta visit, days before the announcement Australia would acquire nuclear-powered submarines, the Indonesian government said Jokowi was unavailable because he was visiting provinces elsewhere in the country. 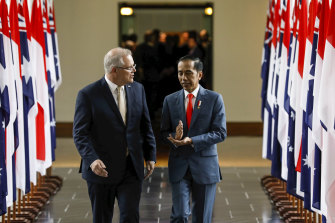 Scott Morrison had planned to meet with Jokowi in Jakarta next week.Credit:Dominic Lorrimer

Indonesia’s foreign ministry on Friday said it had taken note of Australia’s decision to use American technology to acquire eight nuclear-powered submarines and stressed “Indonesia is deeply concerned over the continuing arms race and power projection in the region”.

The Australian government does not believe the failure of the two leaders to meet in person has anything to do with the country’s unease over the submarine plan because the decision not to go to Jakarta was made before the announcement. Diplomatic relations between Canberra and Jakarta have been labelled their best in decades and it was only last week Defence Minister Peter Dutton and Foreign Minister Marise Payne made the Indonesian capital their first stop on an overseas trip which has taken in India, South Korea and the US.

But Indonesia has maintained healthy ties with China and Beijing this year sent millions of Chinese-made COVID-19 vaccines to the country.

Mr Morrison this week spoke with Jokowi about the submarine development over the phone, while he has also called Singaporean Prime Minister Lee Hsien Loong, outgoing Japanese Prime Minister Yoshihide Suga and India’s Prime Minister Narendra Modi in recent days. While Indonesia has expressed alarm about the proposal, Singapore – which already hosts American nuclear-powered submarines – is said to be comfortable with the move.

Former Labor Prime Minister Kevin Rudd, whose government first adopted the policy of acquiring a new fleet of submarines in 2009, has voiced scepticism over the move, saying the submarine replacement program had “ground to a halt” over the past eight years.

“The result: not a single keel laid, up to $4 billion wasted, and the deep alienation of our Japanese and French strategic partners,” Mr Rudd said in an opinion piece for The Sydney Morning Herald and The Age.

“It has been an essay in financial waste, national security incompetence and egregious foreign policy mismanagement.”

Australia, the US and Britain on Thursday announced a historic new partnership, known as AUKUS, which will allow Canberra to access American technology to build a fleet of at least eight nuclear-powered submarines and pursue long-range hypersonic missile technology and undersea drones.

The three-way security pact comes in the face of China’s escalating militarisation of the South China Sea and has angered Beijing, which said the agreement “seriously undermines regional peace and stability and intensified the arms race”.

Mr Morrison will be in Washington between Monday and Saturday next week for the first leaders’ summit of the Quad grouping of countries which includes Australia, the US, Japan and India.

The trip will follow Mr Dutton and Senator Payne’s visit to Washington this week for the annual Australia–US Ministerial consultations, where they agreed with their US counterparts to explore an increase in the number of US troops rotating through northern Australia and more bilateral military exercises. They also floated the possibility of a naval base in Australia which could host a combined submarine and surface fleet.

Along with US Defence Secretary Lloyd Austin and Secretary of State Antony Blinken, Mr Dutton and Senator Payne conveyed their “ongoing concern” about China’s “expansive maritime claims in the South China Sea that are without legal basis”.

They also stressed “Taiwan’s important role in the Indo-Pacific region” and said both sides “stated their intent to strengthen ties with Taiwan”. Beijing has claimed sovereignty over the island state of Taiwan since the end of the Chinese civil war in 1949.

Mr Dutton said “outbursts” and “propaganda” from China over Australia’s development of nuclear-powered submarines will not deter the country from deepening defence ties with the US.

A spokesperson for China’s embassy in Australia said the country firmly opposes and rejects the “unfounded accusations and erroneous remarks against China on issues related to the South China Sea, Xinjiang, Hong Kong, Taiwan and other China-related issues” in the statement from the US and Australia.

“We urge the Australian side to abandon the outdated Cold War zero-sum mentality and narrow-minded geopolitical perception, handle its relationship with China in a genuinely independent manner, stop sliding further down on the road of harming China-Australia relations, and do more to enhance mutual trust and promote pragmatic cooperation,” the Chinese embassy spokesperson said.

French Foreign Minister Jean-Yves Le Drian said he felt “stabbed in the back” over the “unacceptable” deal that shuts the French military out of a key initiative in Western efforts to build a bulwark against China.

Australia and France had been in discussions about boosting their military ties including allowing French soldiers greater access to Australian military bases. Mr Morrison confirmed the talks on Thursday, saying “I hope we continue to discuss those matters with the French”.

Dennis Richardson, who was head of the Department of Defence when the French bid was chosen in 2016, said the circumstances were “messy” but the decision to pursue nuclear-powered submarines was the “right one over the long-term”.

But Mr Richardson warned the challenge of building the submarines in Australia was “a lot greater than what a lot of people think, and is pretty much equivalent to the Snowy Mountain Project after the Second World War”.

“We don’t have all the skills necessary in Australia to construct a nuclear-powered submarine ourselves the technology is one thing, you still require a skilled engineering workforce. We have some of those skills but in the nuclear area we have very little of it,” he said.

“There’s a whole host of regulatory requirements that will need to be put in place, particularly around safety, but the government has noted that.”

Mr Richardson said the French will feel “very let down” and it was worse than how the Japanese would have felt when Australia made the decision to go with France.

“Whatever the Japanese were led to believe, there was never a contract. Whereas the arrangement with the French has been in place now since 2016, so a lot of work has been done, a lot of money has been spent and the French will understandably be very miffed,” he said.

How Well Do You Know These '90s Movie Quotes?