Home » Lifestyle » More than a decade on, Australians are still obsessed with vampire love

More than a decade since the Twilight franchise hit its pop culture peak, Midnight Sun – the new instalment in Stephenie Meyer's vampire romance – has proved the sun is yet to set on the phenomenon.

The novel, a re-telling of 2005's franchise debut from the point of view of vampire Edward Cullen, sold more than 33,000 copies in the first week of release in Australia, marking the strongest sales week for a young adult title in nine years.

According to data from Nielsen Book, the sales also place Midnight Sun as the highest seller for a single week in the last 12 months. Remarkably, it also outperforms single week sales from two titles in the series – Twilight and Eclipse – at the height of Twilight mania in 2008.

"We knew it was going to be huge," says Emma Rusher, communications director of the book's local publisher Hachette Australia. Rusher says the title has already sold a total of 45,000 physical copies and 15,000 e-books since its local release on August 5.

"It's part of an overall trend we're seeing during COVID where Australians are retreating into classic books and comfort reads that deliver that nostalgia and escapism and joy," Ms Rusher says. 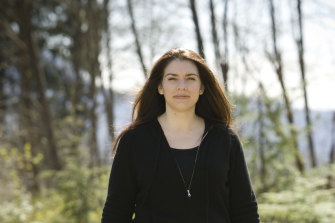 Stephenie Meyer’s Midnight Sun is told from the perspective of Edward.Credit: Supplied

Taylor Cole, the manager of Berkelouw Books Paddington in Sydney and a self-described "super-fan" who read the original quartet when she was 13, shares the sentiment.

"I was interested to see if it would be comparable [to the original novels] or if it was going to flip what we knew about Twilight on its head. But, to be honest, it's about the nostalgia, a hundred percent," Ms Cole says.

"2020 has just been a shit-fight of a year for everybody, and at a time when we just need something familiar and comforting, even if it's a little bit cringey, it's kind of the most necessary thing to tether onto at the moment."

Jen Scott Curwood, an associate professor in English education and media studies at the University of Sydney, says such escapism – "not even so much escaping our lives, but escaping into someone else's life" – is a common appeal of novels, regardless of genre.

Dr Scott Curwood also says it's natural for readers to "develop a personal investment in characters and storylines", which may explain the franchise's appeal about 15 years on.

"I think a lot of readers would be curious. It's been over a dozen years since Twilight came out and Midnight Sun promised a lot of new perspectives and a new narrative voice. I think that would be appealing for readers who were quite loyal to Twilight when it first came out."

The timing of the book's release, in the midst of a pandemic, also offers some intriguing irony for fans who came-of-age with the series, adds Ms Cole.

"Because it spoke to a lot of young teenage girls at that time, between 2005 and 2010, it kind of feels like we're returning to a family or a relationship that supported and inspired us at a time when we thought it was the most challenging time of our lives – you know, that heightened sense of anxiety and tumultuousness of being a teenager. And then you compare that to 2020…," she says.

"I think its success is also a reminder that we can collectively unite through a book. It just feels really important that we've got something like this to use at a time like this when we're so isolated."

Do we REALLY need celebs to raise our spirits?