Home » Lifestyle » Modern Guru: I’m awed by animated Auslan signers – is this an issue for others?

Q: When I'm supposed to be listening to serious TV reports from ministers, police, emergency workers etc, I just cannot take my eyes off those doing the wonderful sign language! Is this a reaction others have? 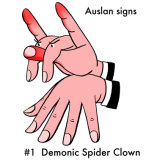 A: You're right: those Auslan signers are amazing to watch. Their expressions are so animated, their movements so mesmerising, their energy so appealing, nobody ever looks at the drab speaking-person with the dull, lifeless face making the mumbly mouth-sounds. It's almost impossible to focus on a televised public announcement – some of us in the hearing community haven't heard a word that any minister, police officer or emergency worker has said for decades.

The Prime Minister could be telling the nation to run to safety because Demonic Spider Clowns are crawling up through our drain holes and killing everyone – and only the deaf and hearing-impaired would survive. The rest of us would be found dead in front of our TVs, our necks punctured by two clown-painted spider-fangs, our faces frozen in an ecstatic smile of Auslan-appreciating awe.

It's not the signers' fault that a vast number of Australians could wind up dead in a Demonic Spider Clownocaust; nobody is blaming them for that. But their signing is so good it actually makes people who can hear go temporarily deaf. Sorry, but it does.

It's vital that hearing people never miss out on important information so there seems to be only one solution. Whenever a minister, police officer or emergency worker is speaking on TV, hearing-people must close their eyes so they can concentrate on the words that are being said. They need to become temporarily blind so they don't go temporarily deaf. It's the only way.

To read more from Good Weekend magazine, visit our page at The Sydney Morning Herald, The Age and Brisbane Times.

‘John Profumo wasn’t real victim in scandal – it was me’, says Christine Keeler