Rich House, Poor House viewers slam ‘patronising’ millionaire motivational speakers who offered a couple living on £72-a-week ‘positive mindset’ coaching worth £30,000 – saying they should have given them cash instead

A couple were reduced to tears after being offered £30,000 in ‘positive mindset’ coaching to help their businesses by millionaire motivational speakers on Rich House, Poor House – but viewers were not impressed and branded the gesture ‘patronising’.

Delivery driver Ant Burrows and his wife Tash, a pole dance instructor, live in a three-bedroom former council house in Bristol with their two children, 12-year-old Kayla and six-year-old Tate.

The family pay off £540 in debt each month, leaving them with a weekly disposable income of just £72.

Appearing on last night’s episode, Tash and Ant admitted their financial situation causes ‘sleepless nights’ and means Ant has to work 12-hour shifts in order to support his family.

They swapped lives with millionaire motivational speakers Andrea and Matt Callahan, who live in a five-bedroom Victorian house in Cardiff with their son Albi and have a disposable income of £1,200 per week.

At the end of the week-long Channel 5 experiment, Andrea and Matt pledged to offer Ant and Tash £30,000 worth of help, to ‘change their mindsets’. 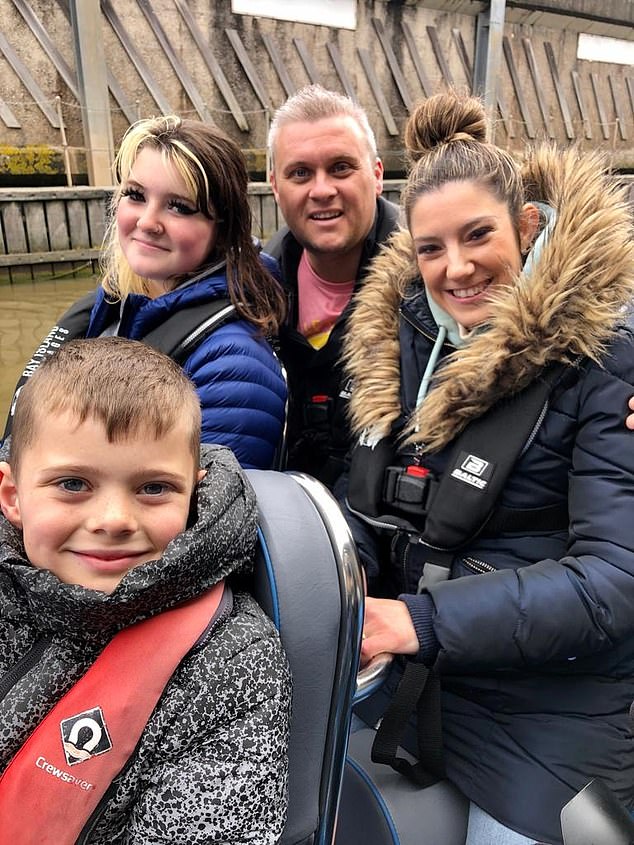 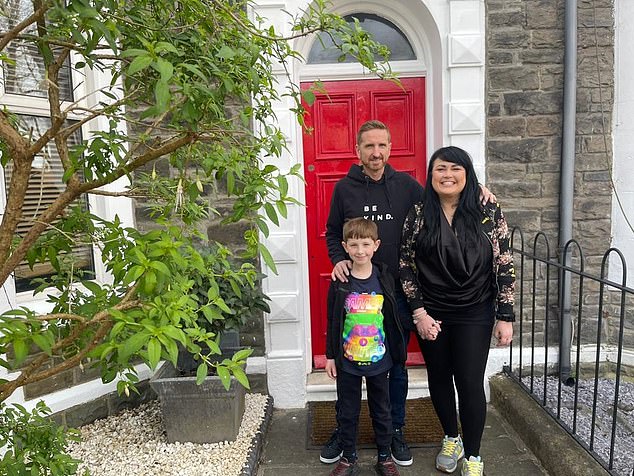 Cardiff-based Andrea and Matt Callahan, motivational speakers, had £1,200 of disposable income per week, and appeared on the Channel 5 show

Ant and Tash were so moved by the offer that they were immediately reduced to tears.

Viewers were less sold on the idea, with one tweeting: ‘Positive thinking can only go so far. How patronising is this episode. Can we please go back to families just experiencing how the other half live without the week long business marketing.’

Another posted: ‘I can’t stand this whole “you’ll change your whole life if you change your thinking”. Life doesn’t work that way, sorry to say.’

A third added: ‘Here’s a fake 30K worth of mumbo jumbo to change your mindset.’

At the start of the swap, Tash admitted her pole dancing studio barely broke even and said she needed to expand the business, or risk losing it.

All the couple’s efforts were focused on repaying £450 to debt collectors each month, leaving them at ‘rock bottom’ and with ‘nothing in savings’.

‘Ant worries about money all the time. There have been a lot of sleepless nights, worrying about when he’s going to be able to pay the next mortgage bill,’ Tash said.

Tash started her pole dancing studio in order to ‘feel better about herself and lose weight’.

‘My thought was “these girls in the clubs are hot.” To me, I think they have gorgeous bodies,’ she explained. 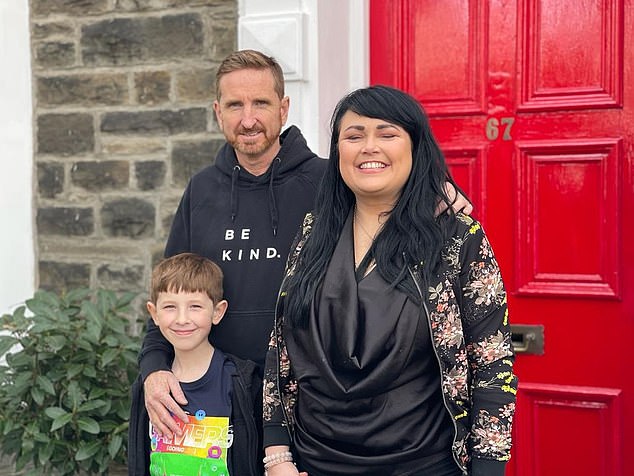 After living in Ant and Tash’s shoes for a week, Matt and Andrea pledged to offer them £30,000 worth of help, to ‘change their mindsets’ and help Tash’s pole dancing endeavour 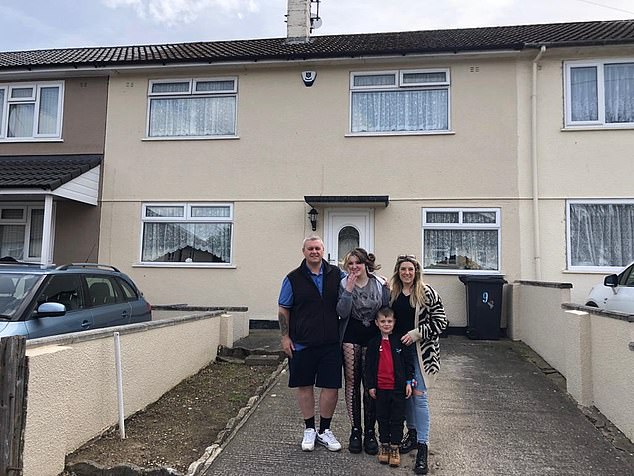 At the time of the show, Tash, who had a pole in her kitchen, admitted that her studio was barely making even, and she needed to expand the business if she didn’t want to lose it

This motivated her to try a pole dancing class, and later, to launch her own studio, where she gives lessons to her clients.

However, the studio barely broke even at the time of filming, and Tash admitted she needed a little bit of guidance to be able to expend.

She brought in extra income by decorating glasses that she sold online. But the couple’s hectic work schedules meant they had little quality time to spend as a family. 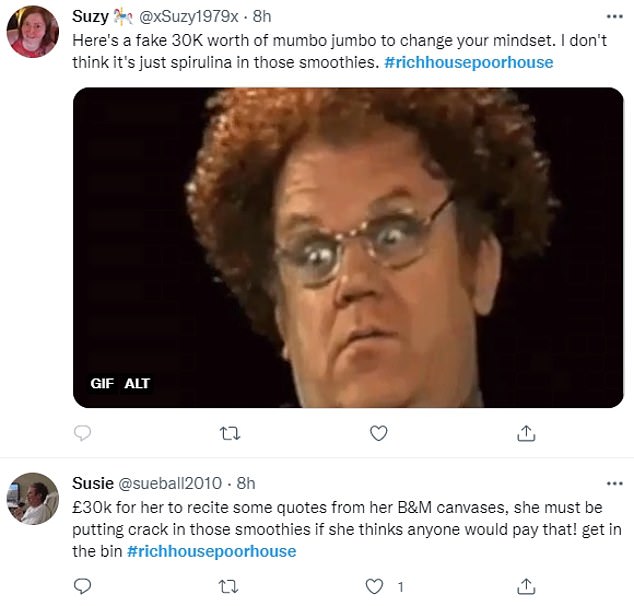 Viewers were not impressed with Matt and Andrea’s offer of ‘£30,000 in classes to change their mindset’, describing the gesture as ‘patronising’

Meanwhile, in Cardiff, Matt and Andrea said they live ‘simply’ despite their sizeable income.

‘We’re still in the same house that we’ve always been, we’ve not upgraded, we’re not extravagant,’ Andrea said.

Matt added: ‘We give quite a lot away, because we have the finances to do it. When you’re kind to one person, it ripples out to five people, that carries on to 125 people, that’s an incredible positive impact.’

Matt used to be an international DJ, playing sets with the likes of the Chemical Brothers, while Andrea used to work as a singer, producer and vocal coach before getting into the motivational speaker business.

Andrea revealed she came from a working class background in South Wales, and that she was a single mum when she met Matt.

‘I was doing therapy, I wasn’t really well, I discovered positivity and positive psychology,’ she said.

She turned this new passion into a career, helping women in business to feel empowered.

In Bristol, Tash shared in Andrea’s belief in positive thinking and manifesting.

Ant had an interest in computing and gaming, and hoped to start a podcast on the subject, however, his pessimism was holding him back from taking a chance.

Tash said she hoped to see a more positive change in her husband, saying: ‘He always put himself down, he’s quite negative towards himself.

‘I do believe that if you have happy thoughts and able to come out of the negative thinking, you can change your life around.’

Matt was keen to help Ant and Tash reaching their full potential.

‘It’d be good to help the other family and what ideas they got and how they can take it further,’ he said.

When the swap started, Matt and Andrea were shocked to find they would only have £72 to live on for the week, which made Andrea nervous as to how her family would eat a healthy diet on such little money.

Meanwhile, Tash and Ant were over the moon to learn that they’d enjoy a budget of £1,200, even though the mother-of-two noted that she was ‘overwhelmed’ with that amount.

In Cardiff, the Burrows started the day with Matt and Andrea’s routine, which included drinking a spirulina smoothie worth £10 a head and a morning tai chi session.

Meanwhile, the entrepreneurs had to contend with £16 worth of frozen food – and crisps for Albi – for the week, a quarter of their budget.

Matt took on Ant’s shift as a delivery driver where he met Ant’s colleague, Richard.

‘The way that her health mental got so much better was by her trying to do a thing that she loved to do, which was dancing,’ she explained.

In Cardiff, Ant and Tash met with Andrea’s business partner, who gave Ant a free hypnosis consultation. However, the father-of-two was still not convinced that positive thinking was the answer to his problems.

Andrea and Matt were also deeply touched to find out that Ant and Tash were struggling with debt.

‘I think the worst thing about debt is how it makes you feel, if the core of you is feeling ashamed, it’s actually very difficult for you then to be in that expansive space where you can create and make money,’ Andrew said. 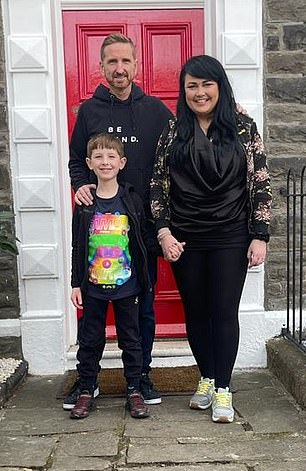 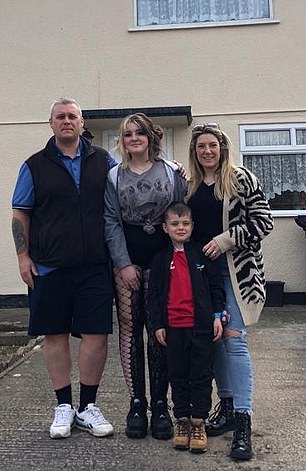 Andrea and Matt were also deeply touched to find out that Ant and Tash were struggling with debt, left. With some of their budget, the Burrows’ family, right, had a professional photoshoot, where Kayla and Tash got to wear beautiful gowns, reducing the pole dancing instructor to tears

The mother-of-two also felt emotional towards the end of the swap, realising that the Callahan house was filled with photographs of the family together, something she said she didn’t have at home.

With some of their budget, the family had a professional photoshoot, where Kayla and Tash got to wear beautiful gowns, reducing the pole dancing instructor to tears.

Ant also got to meet with Matt’s podcast co-creator, who told him that even though he doesn’t believe in hypnosis, or the power of manifestation, he has applied positive thinking to his endeavour in a more practical way, which was a wake up call for Ant, and gave him the drive to start his own podcast.

The swap culminated with a romantic dinner for Ant and Tash, where she told him: ‘I am really excited for you, you’ve been able to pick the knowledge out of people, and it is your time now.’

When the families met at the end of the swap,  Ant confirmed to Matt and Andrea that he had bene able to shake his negative mindset thanks to the week spent in their shoes.

‘It’s changed my outlook,’ he said.

Andrea then revealed that Matt and her had drummed up a way to help the Burrows succeed.

‘We’ve come up with a little package that we think could help you, if you want some help,’ she said.

Mother-of-two Tash was reduced to tear and had to reach out for a tissue to wipe her tears, as she couldn’t believe the news.

‘Matt and I on hand for you as a couple,’ Andrea added.

‘Once we got your mindset sorted, then we can talk about storytelling and doing podcast,’ Matt told Ant.

‘Bring it on, I’m ready for it,’ Tash said enthusiastically.

She later added: ‘I’m blown away, this was the best week ever.

‘This is the change this is the turning point,’ Ant said.

Paula Yates’ tragic death and its devastating legacy of heartbreak

Yoga Teacher, 35, Says She 'Chose Life' Despite 'Wanting to Give Up' After Disappearing in Hawaii Forest for 17 Days