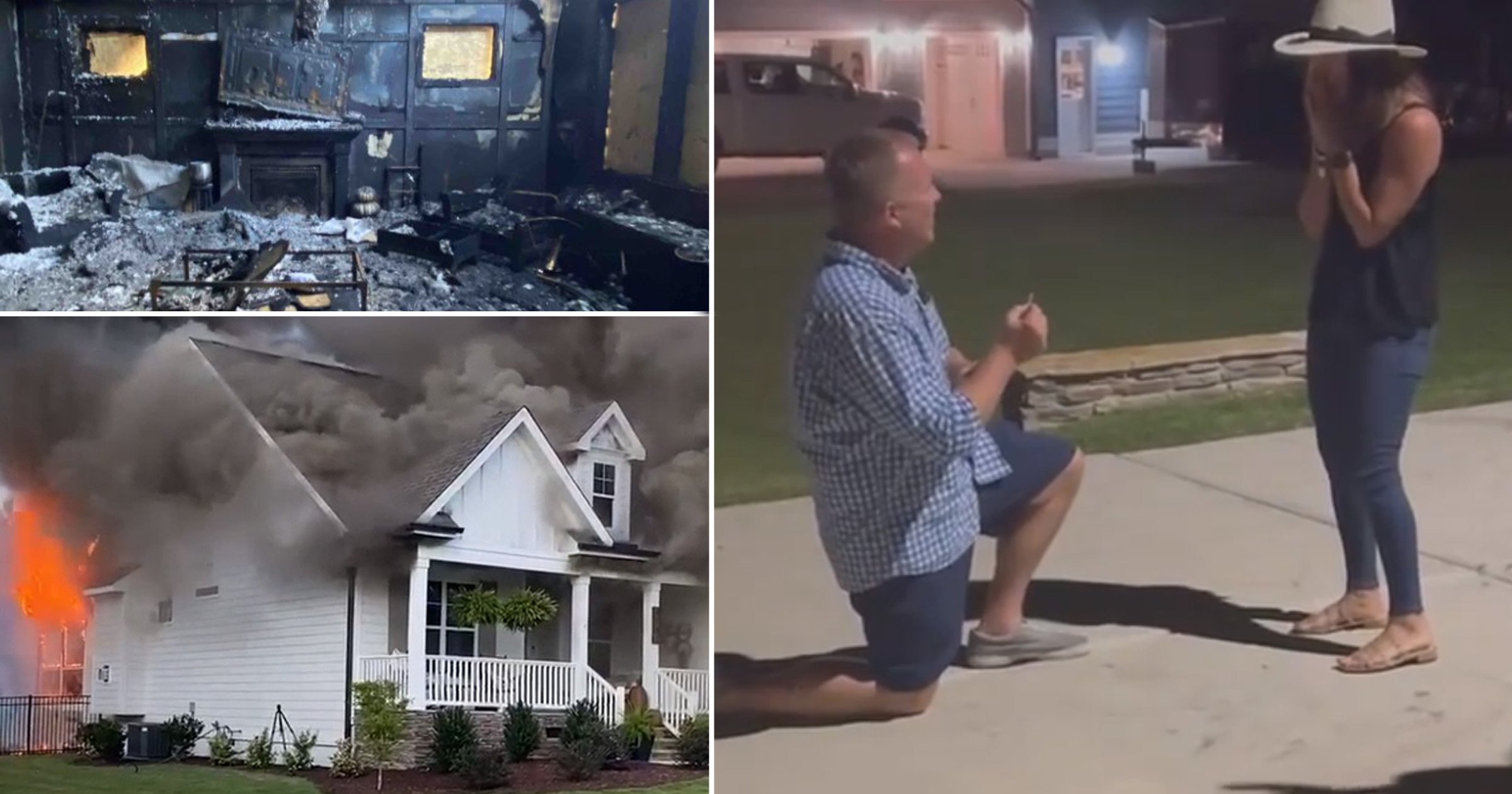 You might picture a sunset dinner or a clifftop picnic as the perfect backdrop for a proposal. But how about the smoldering remains of your home?

A man in North Carolina rescued his engagement ring the night his house burnt to the ground – and then popped the question to his other half.

The ring survived and was found in the wreckage of the home of Sean Matthews and Kellie Stanley, who had lived together for a year.

He originally planned to propose on the one-year anniversary of them moving into the property together, but then a fire destroyed their home on 4 September.

Speaking to Fox News, he said: ‘Having her family there and some friends and neighbors, I knew it would be the last time that we would all be able to be at our home for a long time.

‘I felt strongly that I wanted to leave with her as my fiancée.’

That Saturday night, the pair went out for a romantic meal – but they received a camera call at 6.30pm from a panicked neighbour who said their back porch was alight.

Worried about their dog, Memphis, they were relieved that he was away from the fire as they had left a door open for him to move around.

The couple raced home as neighbours cut off gas lines, rescued the dog, and called the firefighters.

‘Just seeing that our neighbors came together to try and save our home and save our dog, you can’t put it into words,’ Stanley said.

‘We were probably 10 minutes from home and we could see the black billowing smoke in the air.’

Once the fire was out, the couple were allowed back in to see if they could save anything from the wreckage.

Sadly they lost nearly everything, but they couple were able to save their Bible and, incredibly, the engagement ring which had been stored in a fire-proof safe.

Taking the initiative, Stanley then decided to propose and change the dominant memory of that night.

‘Sean just gathered us all in the driveway at the end of the night to give a speech and thank everyone for being there for us.

‘As he’s giving the speech, in my head I’m trying to think of what I’m going to say,’ she said.

‘But, then the entire conversation shifted, and he just started talking about how we started and how we built this house last year.

Stanley popped the question because he ‘wanted to make the best of things and see the silver lining’, expressing gratitude they and their dog were alive and well.

The cause of the fire is still being investigated, but the couple were told had it happened while they were asleep they probably wouldn’t be here to tell the tale, given that smoke alarms didn’t sound.

‘And once he got into the attic, it liquefied any mechanical and electrical components up there.

‘So, by the time the smoke had penetrated the conditioned space of the home where the actual smoke alarms were, they were already dead,’ Stanley said.

Now the couple are staying at a hotel then moving on to a friend’s house, before getting back into a new apartment in October while their home is restored.

‘People don’t know what to say. They go, “Sorry for you losing your house, but congratulations.”

‘We feel the same way. But, it definitely turned the night around for us and made something positive out of it instead of focusing on the tragedy.’

They now have a GoFundMe page to help them rebuild their home.