A man has asked if he was in the wrong to ask his wife to cover up her arm and chest tattoos to meet his dying grandma, because she associates body art with her childhood trauma.

Taking to Reddit for advice, the anonymous man, believed to be from the US, said his grandmother hates tattoos as she associates them with the gangs she grew up with in Japan.

He revealed that his new wife, who he married during the pandemic, has tattoos ‘covering her arms and chest’ but has never met his grandmother until this point.

They found out recently that his Japanese grandmother is ‘really sick’ and unlikely to live for much longer and have made plans to visit her for the last time.

The man asked his wife to cover her tattoos during the visit so as not to upset the old lady and so the family can have a ‘stress free reunion’, but she was upset and branded him ‘misogynistic’. 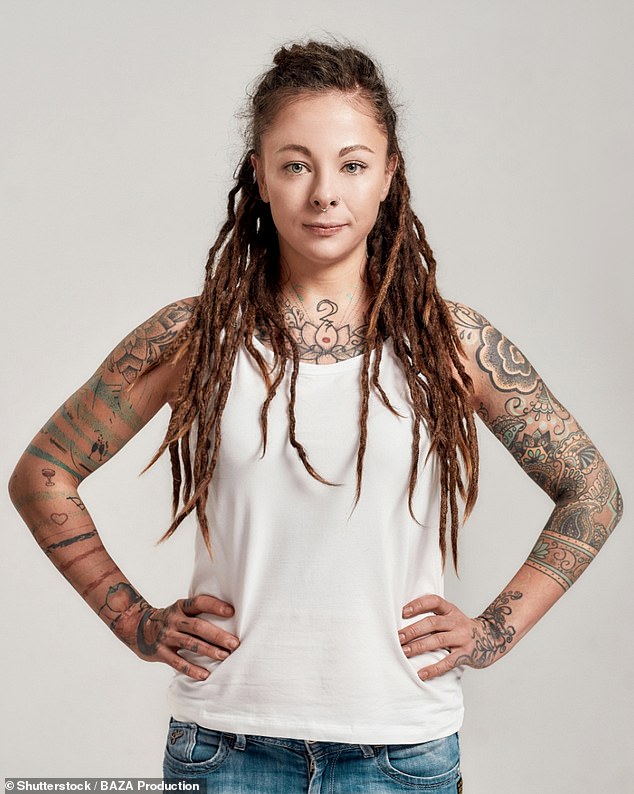 An anonymous man posting on Reddit, believed to be from the US, has asked if he was in the wrong to ask his new wife to cover up her arm and chest tattoos to meet his dying grandma, as she associates body art with her childhood trauma (file photo)

Explaining the situation on the online forum, he wrote: ‘My wife has tattoos covering her arms and chest. My parents grew up in Japan where tattoos are largely associated with gangs, so at first they were very against my wife’s.

‘However, after a lot of conversation, my parents were able to finally accept my wife’s tattoos.

‘My grandma, on the other hand, actually grew up surrounded by gangs. Her brother was in a gang and died while doing gang-related activities, so she has a lot of bad memories associated with tattoos and gangs.

‘My wife and I got married during the pandemic, so my grandma hasn’t met my wife and doesn’t know about her tattoos. She really wants to meet my wife though.

‘We got news recently that my grandma is really sick and probably won’t live much longer, so my family all made plans to visit her ASAP since this could be the last time we see her. 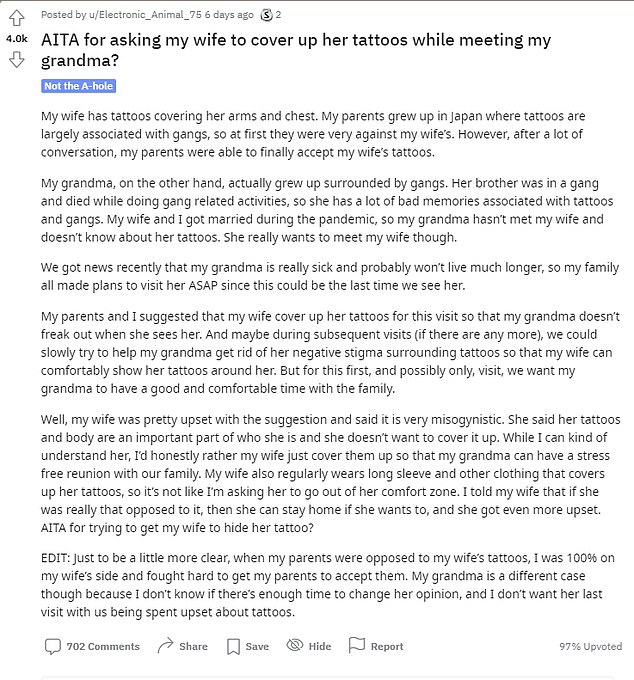 He revealed that he asked his wife to cover her tattoos during the visit so the family can have a ‘stress free reunion’ but she slammed his request as ‘misogynistic’, saying tattoos are a ‘part of who she is’

‘My parents and I suggested that my wife cover up her tattoos for this visit so that my grandma doesn’t freak out when she sees her.

‘And maybe during subsequent visits (if there are any more), we could slowly try to help my grandma get rid of her negative stigma surrounding tattoos so that my wife can comfortably show her tattoos around her. But for this first, and possibly only, visit, we want my grandma to have a good and comfortable time with the family.’

He continued as he his wife’s reaction, saying: ‘My wife was pretty upset with the suggestion and said it is very misogynistic. She said her tattoos and body are an important part of who she is and she doesn’t want to cover it up.

‘While I can kind of understand her, I’d honestly rather my wife just cover them up so that my grandma can have a stress free reunion with our family. My wife also regularly wears long sleeve and other clothing that covers up her tattoos, so it’s not like I’m asking her to go out of her comfort zone.

‘I told my wife that if she was really that opposed to it, then she can stay home if she wants to, and she got even more upset.’

Reddit users rushed to the comments to give her advice on the situation, with most people agreeing that he was not in the wrong as his grandmother has ‘trauma’ associated with tattoos

He concluded the post by asking members of the forum for advice on his dilemma, wondering if he was in the wrong to asking his wife to cover her body, while at the same time being respectful to his grandmother.

Reddit users rushed to the comments to give her advice on the situation, with most people agreeing that he was not in the wrong as his grandmother has ‘trauma’ associated with tattoos.

One person wrote: ‘Your grandmother is dying and any visits should be happy, not stressful. Your wife’s tattoos are a part of who she is and you don’t have a problem with that; it’s not like you ever ask her to cover them in other situations.

‘You also respected her opposition and gave her the option to stay home. It’s pretty immature and selfish on her part to make a big deal of this.’

Meanwhile, others pointed out that the request was not misogynic at all, but that his wife should be more understanding of ‘cultural’ differences saying that tattoos have a completely different meaning in Japan

Another person chimed in saying that while they are usually a fan of tattoos, in this scenario, it’s ‘too late’ to change the grandmother’s mind.

They wrote: ‘Normally I’m all for tattoo positivity and stuff, but where grandma has trauma associated with tattoos and where she’s on her death bed and it’s too late to reasonably expect any progress to be made, your wife really needs to put on a conservative shirt and deal, or stay home.’

Meanwhile, others pointed out that the request was not misogynic at all, but that his wife should be more understanding of ‘cultural’ differences saying that tattoos have a completely different meaning in Japan.

One person wrote: ‘It’s not a gender thing at all. It’s very common in Japan for places to request for tattoos to be covered up. It’s cultural thing.’

Another agreed: ‘I think generally asking someone to hide their body to appease other people is absolutely wrong.

‘But, I understand the association with Yakuza [gangster], and given your cultural differences, and your grandmother’s elderly age and ailing health, I think your wife could take one for the team and wear a long sleeve shirt that covers her chest. You aren’t asking her to remove them.’

Glossier Relaunched Their Supers Serums, & They’re Bigger & Better Than Before

Lowe's kicks off its busiest season with major hiring push