Emina Ashman’s writing debut for the theatre, Make Me A Houri, is a playful poetic dialogue inspired by her own life – she was raised in Malaysia, the daughter of a Sufi sheikh, before moving to Australia in 2012. 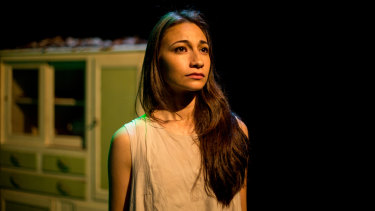 Emina Ashman in Make Me A Houri, on stage at La Mama CourthouseCredit:Benjamin Laut

Always a striking presence onstage, Ashman was seen most recently in Jean Tong’s Hungry Ghosts at the MTC. That also, interestingly, was a coming-of-age story combining Malaysian and Australian cultures, and if Make Me A Houri doesn’t have quite the same dramatic craft or coherence, it possesses a startling originality and ambition.

In an antechamber to the afterlife, a young woman (Ashman) who has dreamt of becoming a houri wakes from death and finds a guide (Nisha Joseph) ready to set her on the desired path.

Even within Islam, houris provoke controversy, and Ashman wrestles nimbly with the paradoxes they embody, drawing absurdity – sometimes humorous, sometimes deeply painful – from misogynistic cultural assumptions and the conflict between strictly literal and more figurative understandings of the houris’ significance. 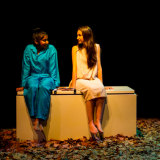 Nisha Joseph (left) and Emina Ashman in Make Me A Houri.Credit:Benjamin Laut

And Ashman uses black comedy to query the hellish ordeal a woman might undertake to literally become a houri. Traditional herbal douches (with chili) anyone? How about taking a steel scourer to your flesh?

Against this, confessional girl-talk unveils the joy and sorrow of growing up as a Muslim woman today. Chat ranges over the tentative delights of sexual awakening, through the spirals of orientalism to fantasies conscious and unconscious that attend the performance of identity. There’s even an anecdote about being slut-shamed for wearing a halal snack pack costume to a fancy-dress party.