Three’s company! Queen’s cousin Lord Ivar Mountbatten, the first openly gay royal, reveals he’s spent lockdown with BOTH his husband and ex-wife – and their three daughters – at his Grade I-listed home in Devon

Most couples feel proud of themselves for emerging from lockdown with their relationship still in tact, but the Queen’s cousin Lord Ivar Mountbatten and his husband James have more reason than most to be in a self-congratulatory mood.

For the couple have spent the last three months living with not only Lord Ivar’s three grown-up daughters, Ella, 23, Alix, 22, and 17-year-old Luli, but his ex-wife Penny, too.

Lord Ivar, 64, revealed in mid-March that his former wife had ‘installed herself in her old bedroom’ at Bridwell Park, the Grade I-listed manor in Devon that she once called home and he where he now lives with James. 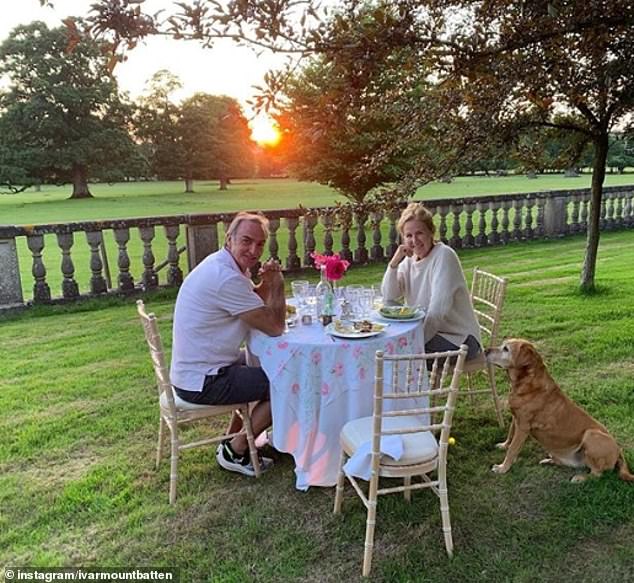 Three times the fun: Lord Ivar Mountbatten has spent lockdown at his home of Bridwell Park, Devon, with both his husband James and his ex-wife Penny. Last week Ivar shared this photo of James (left) and Penny at their ’91st dinner’ together since the start of lockdown 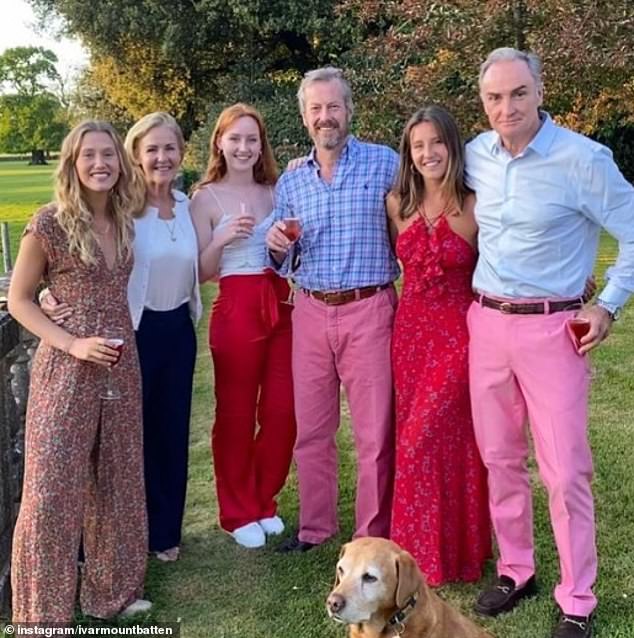 Family fun: Ivar (centre) with Penny (second from left), James (right) and his three daughters, Ella, 23, Alix, 22, and 17-year-old Luli, whom he shares with his ex-wife. The family are seen celebrating Alix’s 22nd birthday last month with drinks in the garden

Instagram snaps shared in the weeks since show how the family have spent the days enjoying drinks in the garden and bonfires by the lake, with no hint of a row in sight.

In one photo Penny had cheekily jumped into Ivar’s bed with her daughters, prompting Ivar to joke: ‘James won’t be impressed to see First Spouse in his spot!’

Just last week Lord Ivar, who is related to both the Queen and the Duke of Edinburgh through his father, David Mountbatten, the 3rd Marquess of Milford Haven, revealed he, James and Penny had celebrated their ’91st lockdown dinner’ together.

The photo shows Penny and James sitting on opposite sides of a prettily-laid garden table, with the seat in between them left free for Lord Ivar. 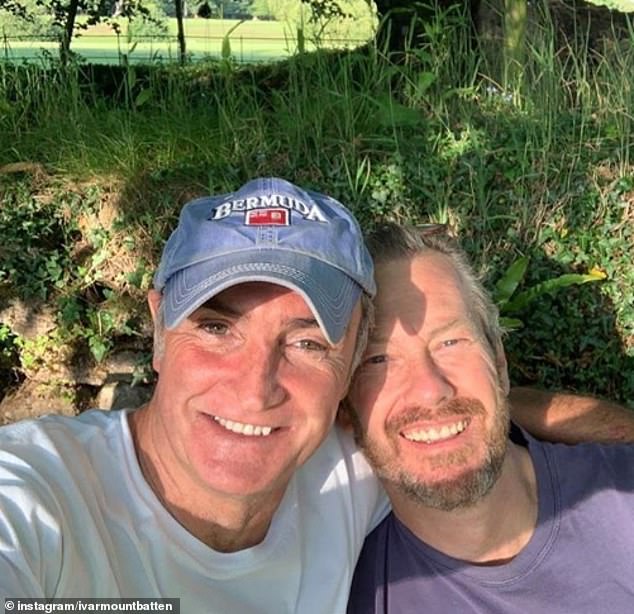 Plenty to smile about! Ivar (right) and James (left) in a photo taken during lockdown 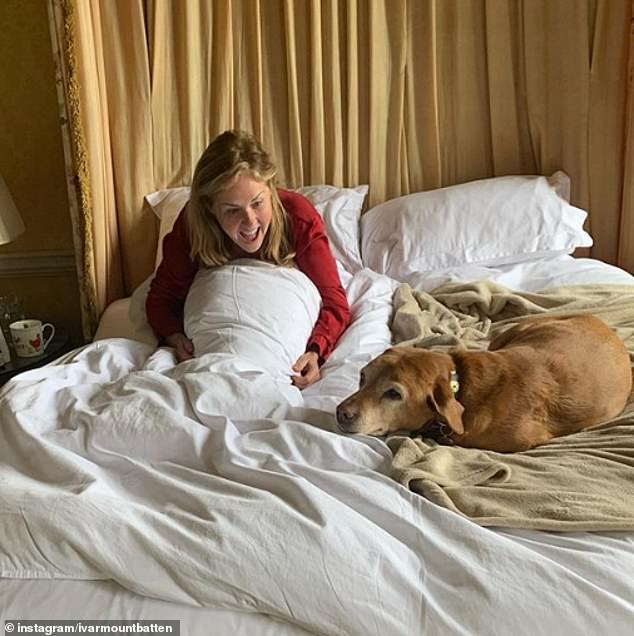 Moving back: Lord Ivar shared this photo in mid-March to reveal that his former wife had ‘installed herself in her old bedroom’ at Bridwell Park, the Grade I-listed manor in Devon that she once called home and he where he now lives with James

The caption jokingly asked, ‘which one of the three of us deserves a medal?’ but the easy smiles on Penny and James’s faces suggest they have both rather enjoyed each other’s company.

While this unconventional set-up might be difficult to imagine for many divorced couples, Lord Ivar and Penny have spoke often about how they have maintained a close friendship in the decade since their 17-year marriage ended.

Penny and Ivar married in 1994 in a church ceremony which was attended by Princess Margaret and Prince Edward, who is the godfather of their eldest daughter, Ella. His wife, Sophie, Countess of Wessex, is godmother to their middle daughter Alix.

The couple raised their children at Bridwell Park until their separation in 2010. Their divorce was finalised in 2011. 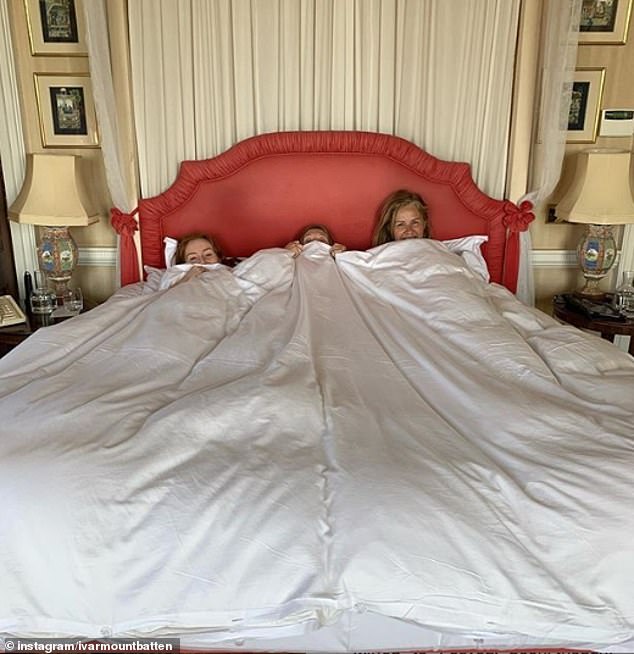 Three in a bed! In one photo Penny had cheekily jumped into Ivar’s bed with her daughters, prompting Ivar to joke: ‘James won’t be impressed to see First Spouse in his spot!’

Three years later Ivar met James, an airline cabin services director from Glasgow. They immediately clicked and three weeks later he was being introduced to family members, although Ivar later revealed that at the time his daughters did not know he was a potential suitor.

Ivar, who became the first member of the royal family to come out as gay, married James in front of 60 family and friends at his the private chapel at Bridwell Park — and celebrated with a lavish reception in the orangery.

In a show of support, Penny gave her ex-husband away.

Speaking to The Times last month, Ivar explained Penny and James have developed their own ‘incredible’ relationship independent of him, saying: ‘When Penny lived nearby, if I couldn’t find James I knew he’d be having a coffee with her, bitching about me.’ 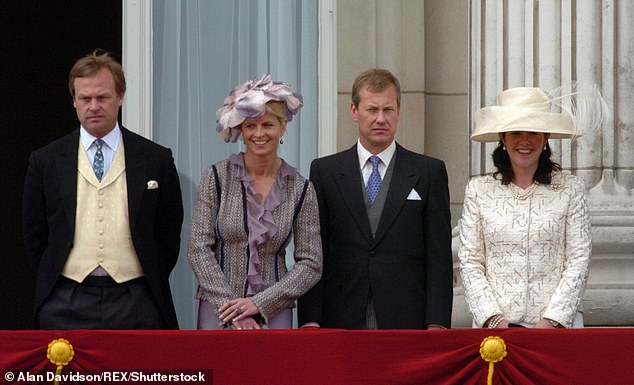 Royal relations: Ivar was married to Penny for 17 years, with the couple attending royal  events such as Trooping the Colour (pictured, Penny and James on the balcony with the Marquess of Milford Haven and his wife Claire Milford at the event in June 2005) 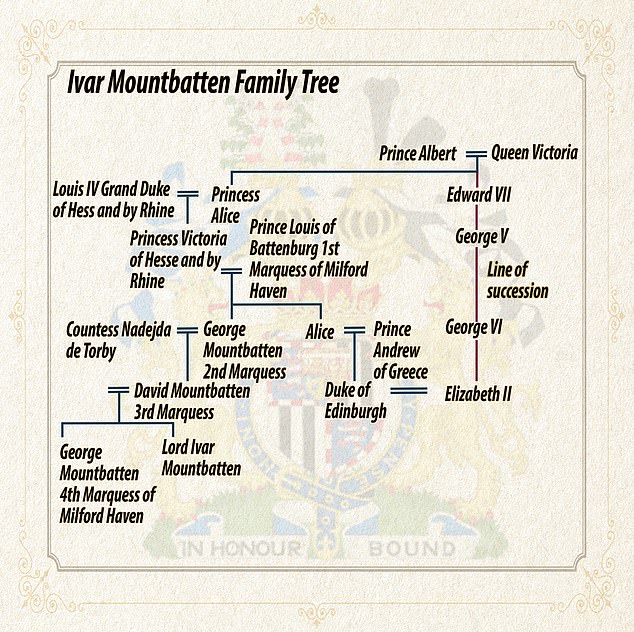 Ivar Mountbatten’s family tree showing he is the son of David Mountbatten, the 3rd Marquess