Giving Us deja vu! Joshua Bassett had jokes when he took to social media to seemingly poke fun at his breakup with his High School Musical: The Musical: The Series costar Olivia Rodrigo.

“First letter is the love of my life,” Bassett, 21, said in a TikTok video on Tuesday, October 10, before tapping the screen to reveal a pink letter “O.” After a brief — but poignant — pause, the “Lifeline” singer tried again.

“Second letter is the love of my life,” he quipped before “Q” appeared on over his head. “OK, Q. I’ll take it,” he quipped, breathing a sigh of relief. 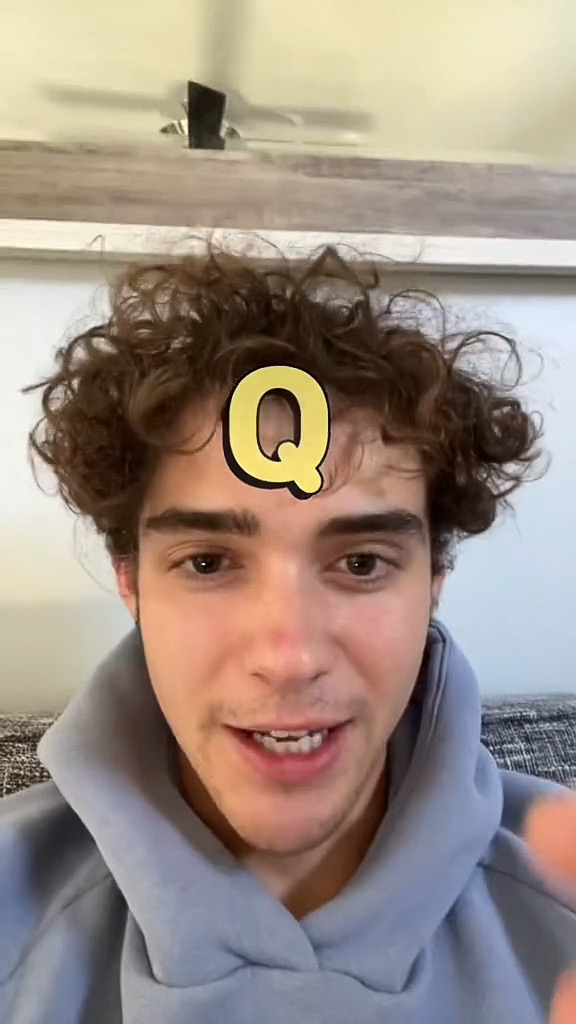 The Grey’s Anatomy alum then captioned the clip with “i—,” seemingly still speechless after seeing the letter of 19-year-old Rodrigo’s first name pop up on the screen.

Fans of Bassett immediately took to the comment section of the clip to respond to the actor’s self-trolling. One person wrote, “YOU DID NOT,” while another said, “josh this should have stayed in ur drafts.”

Though Bassett and the Sour artist never officially confirmed they were dating, the two sparked romance speculation in 2019 after being cast as leads in the Disney+ TV adaption of High School Musical. Rumors swirled further after the twosome wrote a song together for the comedy series.

“I think we understood each other. It was really neat … how well we really did work creatively together,” Bassett shared with the L.A. Times in January 2020 of his creative process with Rodrigo.

The “Brutal” singer, for her part, told the L.A. Times that working with the Better Nate Than Ever star felt natural, recalling one of the instances in which he improvised to her while filming, leading her to get emotional.

“He said, ‘Remember that one time that we wrote a song, and we didn’t know if anybody would like it?’ That one made me cry because I just remembered sharing those memories with him,” she gushed at the time. In one of her only public statements directly regarding him, she added, “I love him so much. He’s my best friend … It was like I wasn’t acting.”

In August 2020, however, Rodrigo made her own TikTok about a “failed relationship” before releasing her song “Drivers License.” After her debut album, Sour, dropped less than a year later, fans speculated that the entire record was about the Stuck in the Middle alum.

The pair made headlines again soon after when fans speculated that a potential love triangle was brewing between the twosome and Sabrina Carpenter, leading Bassett to address the rumors.

“[Everyone] is asking me about Sabrina and Olivia,” he said during a December 2021 interview with GQ. “Why don’t we focus on these women for who they are? Let’s focus on the art that they’re making and how great they are instead of their relationship to a boy.”

While the “Lie Lie Lie” singer revealed at the time that Rodrigo “hasn’t spoken to me since ‘Driver’s License’ came out,” the duo reunited at the season 3 premiere of HSMTMTS in August, even posing for photos together on the red carpet.

People are using #ShareBlackStories for Black History Month on Instagram