‘Oh my gosh, you’re having a BABY!’ Joyful video shows a little girl yelling and running around in circles after finding out her mom is pregnant

The adorable moment a young girl found out she was going to be a big sister was captured in an adorable video.

The video, which was filmed in September 2017, sees the adorable little girl, from Lake Stevens, Washington, standing in her garden with her mother, just moments after it appears she revealed the news to her little girl.

Reacting to the news that she is going to be a big sister, the child can be seen running around the decking area in the back yard of their home, saying: ‘Oh my gosh, you’re having a baby!’ 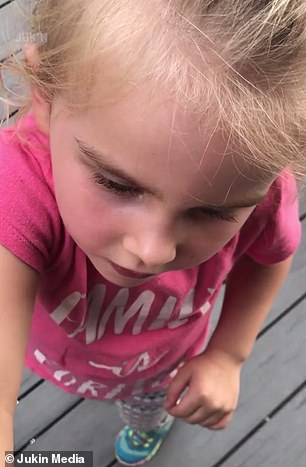 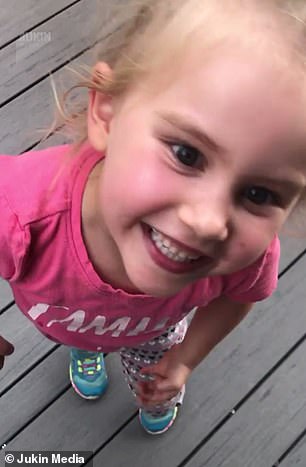 Excited! The adorable moment a young girl found out she was going to be a big sister was captured in a sweet video that saw her first smiling after her mom told her the news

Thrilled! After realizing her mother was pregnant, the little girl ran around the decking in the family’s back yard in Lake Stevens, Washington, and said: ‘Oh my gosh, you’re having a baby!’ 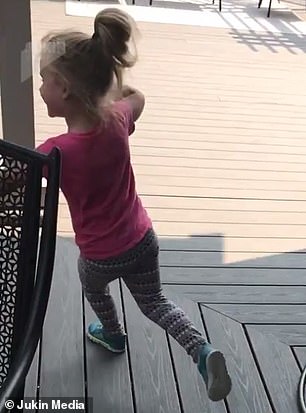 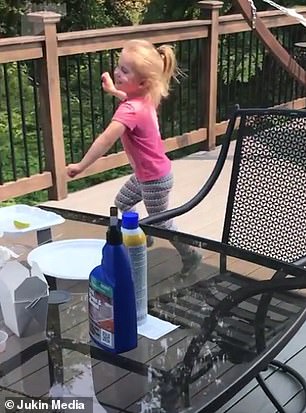 Delighted: As the adorable child, who was clearly thrilled about the fact she is going to have a younger sibling, ran around the table in the back yard, she yelled: ‘This is so exciting!’

While running laps around a table in the garden, the little girl expressed her excitement about the upcoming baby.

‘This is so exciting,’ she yelled.

The child was then seen running around a dining table in the garden again, this time saying: ‘I’m so excited!’

She then appeared to be have come closer to her mother’s stomach, touching her baby bump.

A male voice, who is presumably the father of the child, can be heard in the background of the clip.

The video, which was captured by the girl’s mother in September, 2017, saw her running around in circles over and over again.

She continuously screamed ‘I’m so excited’ while running around the back yard.

However, she stopped running when she tripped on the deck in the back yard and fell down.

After she fell, she could be heard saying ‘ow,’ while holding her knee.

Even then, her excitement for the baby overtook and pain she might have been in as a result of the fall.

Her mother could be heard asking her if she was okay, to which the little girl said ‘yes’, as she laughed.

She then got up from the ground and made her way back over to her mother.

Responding to her daughter’s sweet reaction, the mother said: ‘Aww, I love you.

She then gave her daughter a hug, as the little girl wrapped her arms around her mom.

Student was bullied by classmates for being a sex worker