Home » Lifestyle » Keeping it real: Gladys Knight on the Masked Singer and her Australian tour

You could forgive someone with seven Grammys and a six-decade singing career for becoming complacent. But that’s not Gladys Knight.

One of her more recent forays was the US version of The Masked Singer, the bizarre game of Guess Who featuring celebrity vocalists disguised in outlandish costumes which has been the talk of Australian TV since it landed here last month. 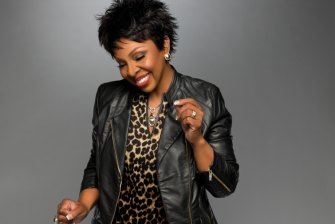 On the phone from Washington, DC in the middle of her current tour – which comes to Australia in February, 20 years since the former Motown star last visited – Knight cackles as she recalls the giant bumblebee costume she wore on the show.

She says she had "no idea" what the gig was about when she accepted it, but by nature she is "very inquisitive about anything to do with entertaining". Singing songs outside her genre – such as Sia's Chandelier and Miley Cyrus' Wrecking Ball – was "challenging", but the hardest part was not being able to see her audience.

When her identity was finally revealed on the series, US host Nick Cannon asked, incredulous, "Why would you do a show like this?!"

She simply replied, “We should always strive to do different kinds of things, because they elevate us, eventually."

Knight has ventured onto the screen various times over the years, from the US Dancing with the Stars ("I had a good time"), to cameos on popular TV series such as 30 Rock, Hawaii Five-0 and Ally McBeal. And she's dabbled in Hollywood too.

“They really weren’t that good,” Knight says of her movie stints, which have included minor roles in forgettable films such as Almost Christmas (2016), I Can Do Bad All By Myself (2009) and Unbeatable Harold (2006). (She did play the romantic lead in her very first film role, 1976’s Pipe Dreams, alongside then-husband Barry Hankerson, which earned her a Golden Globe nomination for best new actress.)

“I want to take a little time to do more training as far as the acting is concerned," Knight says.

"My music was so much more rewarding for me knowing what I was doing – even how you express yourself on stage.

“Too often I think: they’ve got great music, but it doesn’t go across the footlights – because it’s almost like they’re doing it for themselves.”

For a singer who considers her vocal talents "a gift from God" destined to be shared, Australian audiences can well expect the opposite from her tour, which will bring a nine-piece band and play all "the songs that you guys have made popular and that you fell in love with". A quick YouTube reveals that, unlike some of her touring contemporaries, Knight's voice still has the ability to send chills down the spine.

“I don’t take music or life for granted,” she says. “You just never know what’s going to happen, how it’s going to turn out. You give it your all, you try to be the best that you can be. You always chase goals.”

Knight performed with the Pips – backing singers comprising siblings, cousins, friends – for nearly 40 years before going it alone in 1989. She may have watched the music industry change over the decades, but she has remained steadfastly true to herself.

“Music is one of those arenas where it’s ever changing,” Knight says.

Going Part Time Can Be A Cruel Trap For Women, But There’s A Way To Do It Right