Did you feel the Earth tremble underneath your feet just a moment ago? Or perhaps you heard a shriek echoing in the distance and wondered what was happening outside your house, only to look out the window and see nothing amiss? Well, I can explain this odd phenomenon. Ready for it? Jimin has black hair. I repeat: Jimin has black hair. So that rumbling under your feet a moment ago was because Jimin’s new black hair at BTS’ L.A. Rose Bowl concert is sending ARMYs into blackout mode and their passing out at the sight of Jimin’s new look. Facts.

In all seriousness, Jimin decided to go and casually send every ARMY into an existential crisis by dying his hair back to black ahead of BTS’ May 4 concert at the Rose Bowl stadium in Los Angeles, California — the first stop on their extended Love Yourself: Speak Yourself world tour.

Throughout the two-week-long promotional push for BTS’ new single "Boy With Luv," which dropped on April 12, Jimin’s hair was a lovely pink. It matched perfectly with the song’s music video’s all-pink aesthetic. And on May 1, when the boys’ hit the Billboard Music Awards stage to perform the song for the first time live with Halsey, Jimin was rocking his pink hair along with a pair of chic pink shades. 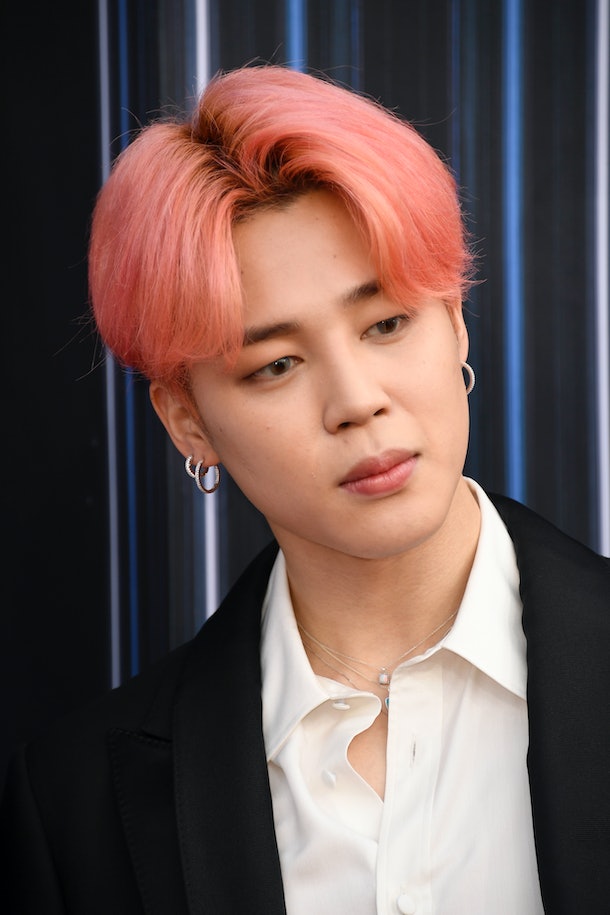 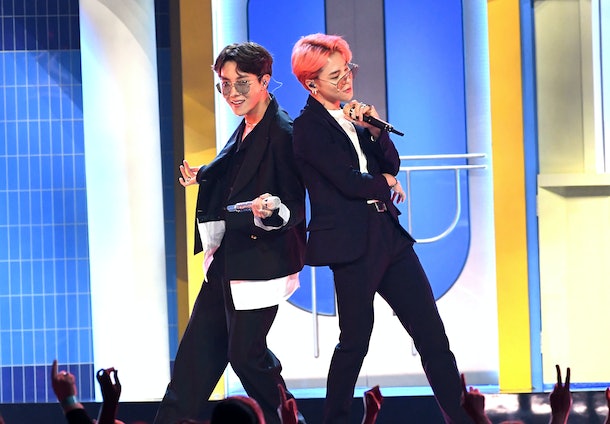 The sight of Jimin with pink hair (or any color hair, really) is pretty lethal, and I actually think it should be legally required that Big Hit Entertainment give fans some type of warning at least two hours before Jimin casually strolls out into the world with a new color. Y’know, so fans can prepare their eyeballs and hearts to be attacked.

Alas, there was no warning on May 4 when Jimin did the unthinkable at soundcheck: He strolled out onto the stage wearing a big, baggy flannel shirt with a whole head of BLACK HAIR.

Prepare yourself, because these pictures will, without a doubt, make you lightheaded. Check out Jimin’s new look below:

And here he is in motion:

Everyone knows that as hot and amazing as Jimin looks when his hair is pink, or blue, or orange, or whatever other rainbow color he chooses — no color ever comes close to his natural black hair. It’s his most powerful state.

I honestly think the reason why Jimin dyes his hair so much is to spare the general public from spontaneous mass blackouts. I mean, we can’t have people innocently scrolling through Twitter getting attacked by new photos or videos of Jimin with black hair. How are people supposed to live normal lives under these conditions? (You think I’m exaggerating, but really… I’m not.)

Anyway, the BTS ARMY was not prepared for this.

Before BTS’ concert even started, "JIMIN HAS BLACK HAIR" was trending 16th on Twitter in the U.S. Because, like I said, ARMYs were not prepared. Check out their flustered tweets below.

And just think: This is fans reacting to some low-quality, grainy pictures of Jimin in a flannel at soundcheck. Just wait until he emerges on stage tonight in his new custom Dior during the actual show and fans start uploading HQs to Twitter. GAME OVER.

Well, if you want to be a productive human from this point on, you better avoid ARMY Twitter at all cost, because black-haired Jimin has returned and nothing will ever be the same.

Are Virtual Markets Working For Distributors and Buyers Navigating Coronavirus?