Would YOU take a phone call on the loo? Fierce debate breaks out on GMB as actress Jeni Barnett claims that people can’t help being used to ‘instant gratification’ – but viewers brand habit ‘disgusting and odd’

Jeni Barnett admitted that she has no problem using her phone on the toilet ‘if nature calls’, while Jemma Forte branded the habit ‘unhygienic and disgusting’.

Author and presenter Jemma, 47, appeared on Good Morning Britain today alongside actress and Great Food Live presenter Jeni, 72, to debate whether it’s acceptable to use your phone on the loo after a study showed 50 per cent of Britons are guilty of the habit.

Speaking from her London home, Jeni said that ‘instant gratification’ is to blame for people being so attached to their mobiles, while Jemma argued that ‘nothing will change in your life’ if you miss one call.

Viewers weren’t impressed by Jeni’s argument, with one dubbing the habit ‘odd and utterly disgusting’ while another said they agreed with Jemma’s argument ‘100 per cent’. 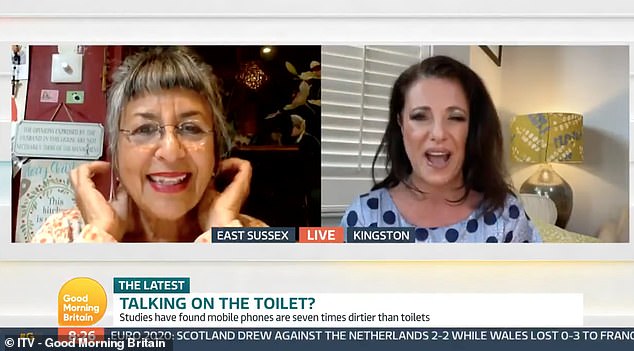 Jeni Barnett admitted that she has no problem using her phone on the toilet ‘if nature calls’, while Jemma Forte branded the habit ‘unhygienic and disgusting’ during a Good Morning Britain appearance today 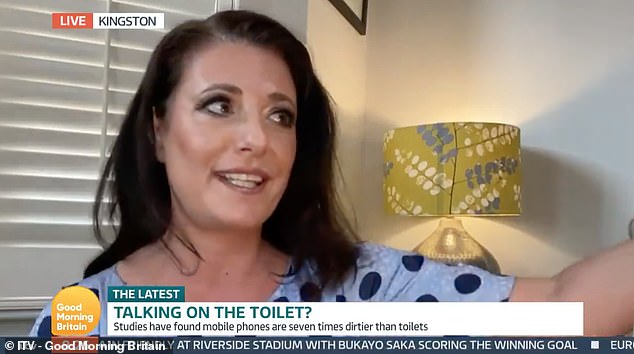 Author and presenter Jemma, 47, argued that ‘nothing will change in your life’ if you miss one call while on the toilet

‘If you’re in the middle of the call and don’t want to stop the call, you will go into the bathroom when the call of nature comes to you’, said Jeni.

She went on: ‘My old man takes the telephone in with him in case he receives calls, I never do that – I do think it is a disgusting habit, because the idea of intimacy near a lavatory pan turns you off.

‘But everything today is instant, it’s all about instant gratification, we have remotes very close to us and when the telephone goes and you think “I must take this, I might miss a job, a friend”. it doesn’t matter what you’re doing .’

She added: ‘I’m not going to drop the phone down the loo, it’s not unhygienic and when I have finished I will take my telephone, take if off speaker phone, close the lid and flush the loo and hold my phone miles away.’

Viewers agreed with Jemma, with one writing: ‘Jemma Completely Agree 100 per cent. Never take my phone to the loo if I miss a call, phone them back. Simple as that’

But Jemma disagreed, arguing that we shouldn’t be ‘surgically attached’ to out mobile phones.

‘I absolutely think this does feed into this culture we’ve generated by having computers on us all the time, our phones, we’re think we’re so important we cannot be without our phone we’re surgically attached for five minutes ‘, she said.

‘I think – if i’m on the loo and hear my phone ringing, you do wonder who it is. But you can wait, it’s fine, we have voicemail. I’m not that important, nothing will change in my life if it’s not that minute. Secondly you can hear if someone is on the loo, that’s a bit disgusting.’

She went on to argue that the habit is unhygienic, and that in the real world it wouldn’t be acceptable to speak to someone in person while on the loo. 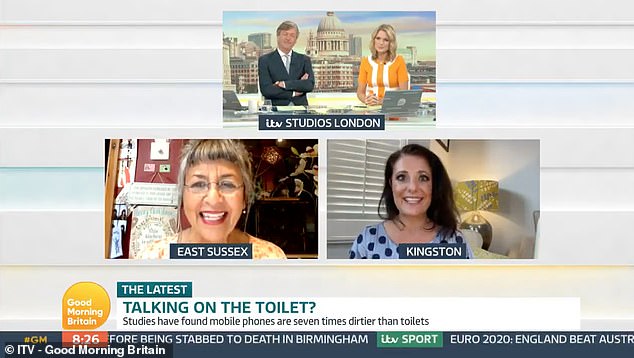 ‘You have a lock on the door to keep people out, so why take thousands of people who are on the end of your phone – on your social media – in?’, she asked.

‘If you’re at work and in a board room and you need the loo, you finish off your conversation and politely excuse yourself, and go to the bathroom afterwards. Jenni said it’s not unhygienic, it is.’

Viewers agreed with Jemma, with one writing: ‘Jemma, completely agree 100 per cent. Never take my phone to the loo if I miss a call, phone them back.  Simple as that.’

Another said: ‘Odd and utterly disgusting. How urgent is that call, that you’d need to talk to folk whilst your body does it’s business?!’

While a third viewer agreed: ‘No way!’