Home » Lifestyle » Is the new Lord of the Rings TV show really ‘too woke’?

The first episode of Amazon’s new billion-dollar Lord of the Rings TV series, The Rings of Power, features a scene where a furious snow troll clobbers a squadron of elves. The scene turned out to be an eerily apt metaphor for how the highly anticipated series – the most expensive ever produced – was received by a segment of the audience. 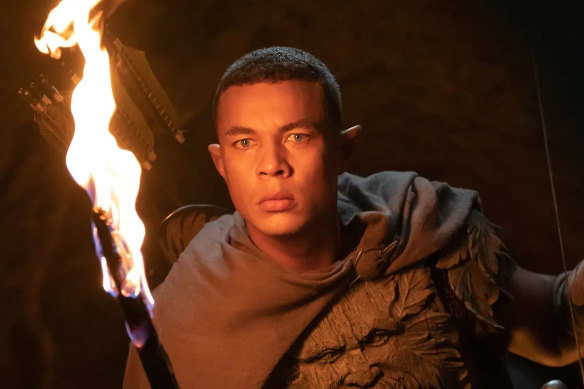 Puerto Rican actor Ismael Cruz Cordova has been vilified since the announcement of his casting.Credit:Matt Grace/Amazon Prime

Since its premiere last week, real-life internet trolls have stormed Google, IMBD and Amazon to “review-bomb” the new series with one-star ratings. While there has been some good-faith criticism aimed at the show’s plot, pacing and characterisation, much of the backlash seems to be fuelled by self-described purist fans critiquing the show’s casting of non-white actors and claiming author J. R. R. Tolkien’s vision has been muddied by a “woke” agenda.

The backlash was so severe Amazon has wiped reviews from its site and implemented a three-day delay to give moderators time to weed out spam reviews. So is The Rings of Power really too “woke”? And what did Tolkien himself have to say about race?

What’s been the response to The Rings of Power so far?

According to actual TV critics, the prequel series – set thousands of years before the events of the Lord of the Rings books and Peter Jackson’s film adaption – has pulled through with the goods. Review aggregator Rotten Tomatoes found 85 per cent of critics returned positive appraisals of the first two episodes. This masthead’s reviewer called it “splendidly ambitious, and ambitiously splendid”.

Viewer reviews are way more polarised. On IMBD, 18.2 per cent of reviews are one-star ratings.

Lord of the Rings fans have spammed Google reviews and other sites with one star ratings.Credit:Screenshot

The average Google rating is 3.2, but the vast majority of ratings are at either end of the scale. Many of the most-liked one-star Google reviews cite the show’s inclusion of black and brown actors as a reason for the low rating, or complain the male elves are portrayed as weak to make female warrior elf Galadriel appear stronger.

Elon Musk has sided with the Tolkien fans who felt the new series is unfaithful to Tolkien’s legacy, tweeting that “Almost every male character so far is a coward, a jerk or both. Only Galadriel is brave, smart and nice”.

On the other hand, actual fantasy expert and bestselling author Neil Gaiman was summoned and delivered a clap back for the ages – defending the show and its casting.

Should we have expected this response?

Puerto Rican actor Ismael Cruz Cordova certainly did. The actor, who plays the elf warrior Arondir, is at the centre of the debate, with some pointing out that Tolkien described elves as “fair” in the books (although debate remains as to whether Tolkien meant fair as in “beautiful” rather than “pale”).

Cordova told Esquire “pure and vicious hate speech” had spewed into his social media inboxes since his role was announced two years ago. “I fought so hard for this role for this very reason,” he said of the backlash. “I made sure that my elf was the most Elven, the most incredible, because I knew this was coming.”

An Australian Tolkien expert, Dr Helen Young, who lectures in writing and literature at Deakin University and is an editorial board member at the Tolkien Journal of Research, is also unsurprised.

“The criticism isn’t new,” Young said. “Peter Jackson cast some actors of colour to play hobbits in his Hobbit films. They were very minor characters, but there were similar kind of complaints about it.”

Why are some fans so angry about the casting of people of colour?

On the surface it may seem this beat-up is simply a collision between traditionalist fans and a billion-dollar production catering to contemporary standards of diversity and inclusion on screen. But according to Young, there are more insidious forces at work. 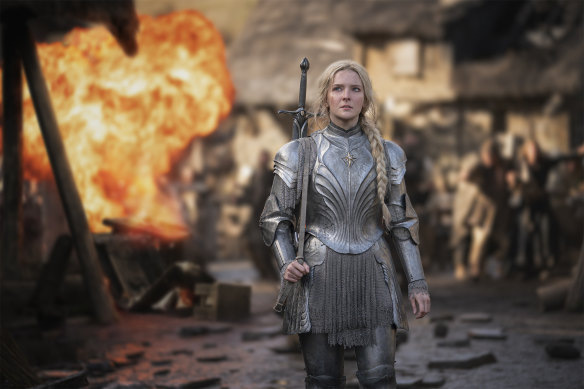 Morfydd Clark plays Galadriel in The Lord of the Rings: The Rings of Power.Credit:Matt Grace / Amazon Studios

She said the controversy was partly whipped up by far-right political actors and boosted by conservative news outlets like Breitbart. The discussion eventually leapt over to the mainstream.

“Suddenly, what you’ve got is this narrative that true diehard fans are engaged in this backlash against the diversity agenda of a major corporation, and real fans of Tolkien don’t want actors of colour in their Middle Earth. That’s just not true,” Young said.

“There are fans who think that way, but their voices are being weaponised by far-right political activists to give their agenda a louder voice. There are fans who have been troubled by the whiteness of Tolkien’s world for decades who were just delighted by [the new series].”

Tolkien’s work has a history of being used in white nationalist extremist groups. Derek Black, a former white nationalist, started a Lord of the Rings discussion forum on the neo-Nazi site Stormfront to recruit new members to the cause.

“What he thought was, well, those movies have such a white mythos, [and] if you were talking about them from a kind of white nationalist perspective, that you could get people turned on to that ideology.”

Of course, there are fans genuinely upset that the show’s diverse casting is at odds with their interpretation of Tolkien’s vision. Young’s advice? Stick to the books and the all-white cast of Peter Jackson’s trilogy, “and think about why the presence of an actor of colour in an imaginary world is so painful to you.”

What would Tolkien actually make of The Rings of Power?

Tolkien spoke out against anti-semitism and apartheid during his lifetime, but for Young, it’s clear “Tolkien’s world is racist”. 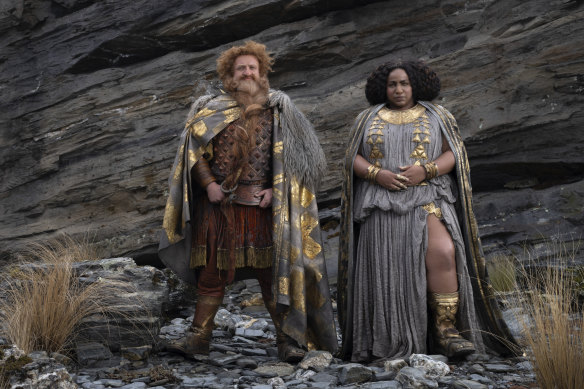 “In The Two Towers and in Return of the King, it talks about high, middle and low humans. And those categories are colour coded by race,” said Young. “The high humans are kind of whiter. He describes the middle humans as swarthy, so they’re darker.”

Tolkien’s descriptions of orcs as “squat, broad, flat-nosed, sallow-skinned, with wide mouths and slant eyes” have been seen as “based on orientalist, anti-Asian stereotypes” too.

“He’s quite clearly, and he said himself in his own letters, drawing on what I would consider to be racist stereotypes that come out of real-world thinking,” said Young.

But Tolkien left the door open to updates, remakes and adaptions of his work. In a letter published after his death he hoped his stories left “scope for other minds and hands, wielding paint and music and drama”.

Young reminds traditionalists that Tolkien’s estate signed off on the series.“The people who knew him best, and his vision best, are fine with actors of colour playing characters in his world.”

The true division remains between those intent on defending the racist elements of Tolkien’s story, and those embracing the “the part of Tolkien’s legacy that has values of connection, empathy and building bridges between different kinds of people”.

‘Engineers of our extinction’: ‘Teal’ independent Kate Chaney takes on quest for progress