Home » Lifestyle » Invasion Day rallies will campaign against the Voice

Invasion Day rallies in Sydney, Melbourne and Brisbane will march under slogans calling for treaty and sovereignty to take priority over a Voice to parliament, as the Indigenous organisers say they will campaign against the push for constitutional recognition.

Thousands of people are expected to attend the annual rallies in each capital city to commemorate January 26 as the beginning of Indigenous colonisation by the British, with this year’s events taking place as the Voice to Parliament referendum is set to be held in the second half of 2023. 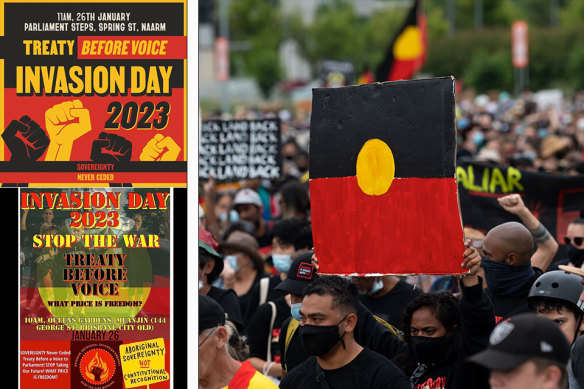 Posters for the Melbourne and Brisbane Invasion Day rallies promote Treaty before Voice.

But organisers will use the high-profile rallies to campaign against the referendum, in a move that exposes long-running tensions within the Indigenous community between Voice supporters and black activist groups that view Australia’s Constitution as a product of colonisation.

Co-organiser of the Sydney rally Gwenda Stanley, a Gomeroi woman, said the theme of this year’s march would be “sovereignty before Voice”, as she criticised the referendum as a waste of money that could have been better spent on the ground in Indigenous communities.

“The main message for us to deliver [at the rally] is that, for a lot of us, we are not for the Voice, we are for sovereignty. It’s about our self-determination as Aboriginal people, as original sovereigns of this country,” Stanley, a caretaker of the Aboriginal Tent Embassy in Canberra, said.

“We have never ever marched these streets singing out ‘we want a Voice’.”

The split over the Voice dates back to the Uluru dialogues in 2017 when a small breakaway group of delegates, which included Stanley and now-Greens Senator for Victoria Lidia Thorpe, walked out of the convention in protest, while more than 250 Indigenous leaders endorsed the Voice as the first plank of the Uluru Statement, followed by treaty and truth. Thorpe has continued to express reservations about the Voice despite ruling out campaigning against the referendum.

Melbourne rally organiser Meriki Onus, Thorpe’s sister and a co-founder of activist group Warriors of the Aboriginal Resistance, confirmed the theme of “Treaty before Voice” had been adopted for the city’s march after a meeting of local activists to discuss the issue.

Ruby Wharton, a Gomeroi Kooma woman and an organiser of the Brisbane rally, said two hours of speeches were planned before the march and many speakers would express their concerns with the Voice referendum and would encourage people to vote no.

“We’re hoping that a lot of the participants and people that come along to our Brisbane Invasion Day rally walk away with a deeper understanding that we don’t want a referendum into constitutional recognition,” Wharton, a member of the Brisbane chapter of the Warriors of the Aboriginal Resistance.

“We don’t need 97 per cent of Australian voters voting on the future of First Nations people who make up less than 3 per cent of the population. Even if we unanimously want [constitutional recognition] and the rest of white Australia doesn’t, then we will not have it.

“That is quite literally a modern example of our self-determination and our rights to decide how we live being decided by white people.”

While the rallies are led by a different collective of activist groups in each city, the organisers liaise with their interstate counterparts.

The Uluru Dialogues, the leading campaign vehicle for the Voice, declined to comment and the office of Indigenous Australians minister Linda Burney did not respond to a request for comment.

Earlier this month, Uluru dialogue co-chair Professor Megan Davis said there would be no coordinated effort by the Yes movement to campaign alongside the Invasion rallies. She urged Australians to support the Voice rather than “warm and fuzzy” pushes to change the date of Australia Day if they wanted to secure meaningful improvements for First Nations people.

The decision by rally organisers to convey a critical message about the Voice on a day when Indigenous issues are at the forefront of the national discussion underscores the challenge facing the federal government as it tries to unite the country behind the referendum.

It comes amid a rocky week for Prime Minister Anthony Albanese after a combative interview on 2GB where he again came under pressure to explain the details of how the Voice would operate. A transcript of the interview later released by his office omitted Albanese’s answer of “no no” when asked if the government had sought legal advice from the solicitor-general on the referendum.

Attorney-General Mark Dreyfus was later forced to clarify that the solicitor-general’s advice was being sought, alongside advice from a working group of constitutional law experts.