Home » Lifestyle » In the Studio With Naudline Pierre, the Painter Uncovering the Unknown 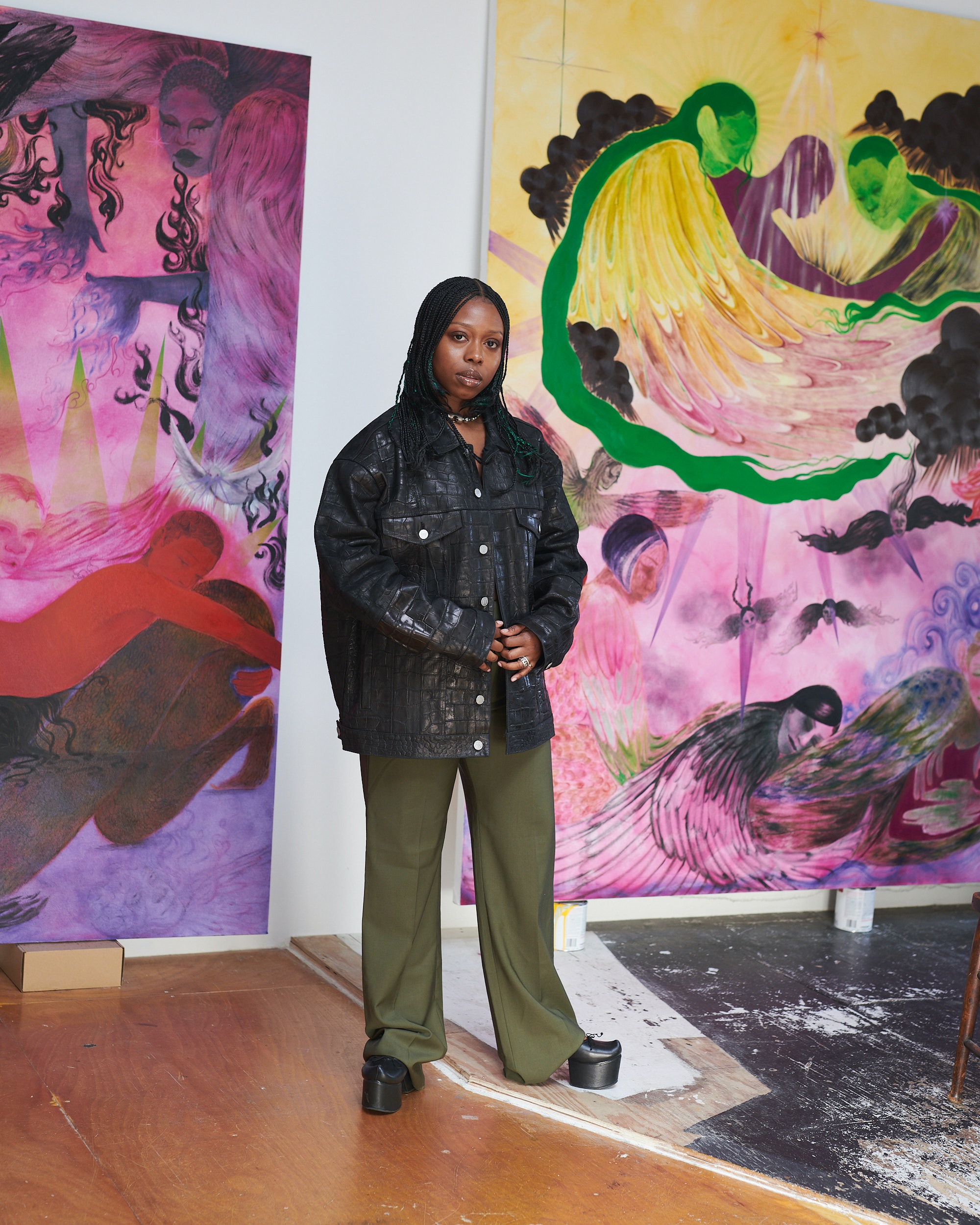 Naudline Pierre and I are the only people present at her quiet, sunny studio in Greenpoint, Brooklyn on a lazy recent afternoon. By the time I leave an hour and a half later, though, I have the impulse to say goodbye to at least a dozen others. Pierre, 32, knows the feeling. “It’s like having imaginary friends sometimes,” she says of the mystical figures who populate and activate her large paintings, and tell stories of a multiverse she’s explored on the canvas for years now. “Whether it’s one world or many worlds, I don’t know yet. But I think part of it is not being really bothered to know and letting myself go with where these characters take me.”

These seraphic beings float and swoop about in a sort of celestial vacuum; there are no landmarks or horizons in sight. The jewel tones of their skin—emeralds, rubies, amethysts, sapphires—are on full display, robed, if at all, by scales or wings. Their faces and bodies are largely human, but they exist in their own class of mythology—not mermaids, not centaurs, but inventions all of Pierre’s own. And yet, they’re often hazy. At times, it’s as if you’re trying to recall them from a dream. The artist’s first solo museum exhibition, “What Could Be Has Not Yet Appeared,” on view at the Dallas Museum of Art through May of 2022, takes us through this rich visual universe.

It doesn’t surprise me when Pierre tells me that, as a “really quiet kid” growing up in suburban Massachusetts, she used to actively try to dream. “I would put myself to sleep by imagining things, focusing on something down to the tiniest little detail,” she recalls. “I still kind of do it as an adult, too.” Back then, she could sit by herself for hours, thinking about creatures and avatars of herself, ones who were able to fly. “I definitely had a big imagination,” she says, then corrects herself: “huge.”

Inspiration wasn’t hard to come by in Pierre’s household. Her father was a pastor, and religion—specifically “a version of Christianity that has a really big emphasis on the end of the world”—was unavoidable. “I always had language surrounding fantastical things growing up,” she says. The visual influence of such iconography remains, but as far as Pierre is concerned, the rest is long in the past. “I would say that my form of spirituality comes with painting,” she says when I ask about her faith these days. “This communication is almost like a prayer.”

Pierre earned her BFA at Andrews University, a small Christian liberal arts school in Michigan, then moved to New York City with plans to eventually get an MFA. Turning 25 seemed like a good enough of an occasion to get going on her plan, and she started at the New York Academy of Art in 2015. “I was still doing figurative work, but it was more based in reality and that wasn’t enough for me,” she recalls. “I think the shift happened when I fully gave myself over to my imagination, and I like to think that goes hand in hand with her appearing as well.”

The “her” in question has appeared in nearly all of Pierre’s paintings over the past five years. “I would say she’s the protagonist, the central figure,” the artist says. “I’ve also called her some sort of alter ego, but it’s important to note that she’s not me. She has her own life and she has agency.” The more “she” comes up, the more I understand why Pierre feels the need to clarify. Clearly, it’s a profound relationship. “I feel like she dictates the compositions for me,” Pierre says. “I am following her experience and seeing what she is going through, how she is growing and how she is experiencing her life. We are in two separate realms but we have a moment of meeting. I’m making these images of care and tenderness, and being surrounded by those really intimate moments has an effect on me. When she’s being held, I sometimes feel like I’m being held.”

By the time Pierre graduated from the Academy in 2017, “she” had fully established a presence in both the artist’s personal life and practice. She’s been at Pierre’s side for all the milestones since, starting with the showing at Thierry Goldberg Gallery in New York City that marked the artist’s first solo exhibition, and continuing with her second, at Shulamit Nazarian in Los Angeles, in 2019. That same year, the Museum of Contemporary Art in Chicago began its 10-month run of “Prisoner of Love,” an exhibition centered around Love Is the Message, the Message Is Death, Arthur Jafa’s video portrait of Black America. Pierre was the youngest of the notable names to be featured, putting her in the company of heavyweights like David Hammons, Glenn Ligon, Faith Ringgold, and Kerry James Marshall.

That fall, Pierre started a coveted residency at the Studio Museum in Harlem. She took the opportunity to get more fully acquainted with the characters that “build around” the central figure. “When they first showed up, they were a little less defined—kind of amorphous, hazy,” Pierre says. “Not a lot of facial features, or not a lot of features at all.” These days, they’re distinct, and often distinctly Black. The haziness that remains is intentional; Pierre has been experimenting with the shear of her oil paints, which allows for some of her figures’ faces to appear almost see-through. She applies just as many coats as she does with the opaque and textured faces, “re-feeling the characters layer by layer.” The effect is particularly striking as clouds pass over the skylights of Pierre’s live-in studio, which is something of a sanctuary. The shift in light is one of the only reminders of the world outside.

Pierre cites European masters such as Goya, Caravaggio, and especially El Greco as references and influences. “I’ve always really longed to see myself reflected in that kind of work,” she says. “So I did my own thing to kind of fill in the gap.” A floor up from the Dallas Museum of Art’s main gallery space, a 2018 painting by Pierre shares a wall with the 15th-century German painter Derick Baegert’s Descent from the Cross. Placing one of Pierre’s paintings in the institution’s European permanent collection, curator Hilde Nelson explains, is an “intervention” of sorts. “It was important to push back against the canon, which has been so constructed by museums and what we value when looking at historical painting, and maybe assert a new paradigm for this kind of painting.”

To Nelson, the placement isn’t “just a resistance”; it also makes sense. “At their core, these historical European religious paintings are about faith and the unseen and what lies beyond us—how we can find connection in an uncertain world,” she says. “Those are central concerns of Naudline’s work. They gesture to experiences and emotions that feel and are deeply human.”

The more agency Pierre’s characters take on, the more they allow the artist to do the same. Later this month, her largest assembly of characters on a single canvas yet will go on display at the Prospect.5 triennial in New Orleans. The 8’ by 10’ painting is teeming with life: There are a dozen or so humanesque figures and winged, disembodied heads that Pierre calls “cherubs.” The action is divided up into scenes so viewers can “rest” in different areas with different characters, taking in what they’ve allowed us—Pierre included—to see. She’s always thinking about how to build out her universe, and plans to debut her first sculptural works at her first exhibition with James Cohan Gallery in April of 2022. “I keep going back to the word ‘expansive,’ because it really is what I’m thinking,” she says. “I want to be able to stretch and grow and shrink and chip away at things. Reassemble. Freedom, really, is what it boils down to.”

These Were the Most Popular Books of the Decade