Home » Lifestyle » How long can you freeze turkey and other Christmas dinner favourites?

THERE could be a shortage of turkey and pigs in blankets this Christmas, but your freezer can save the big day.

Brits are already buying up for December 25 with turkey sales soaring more than 400% at one supermarket. 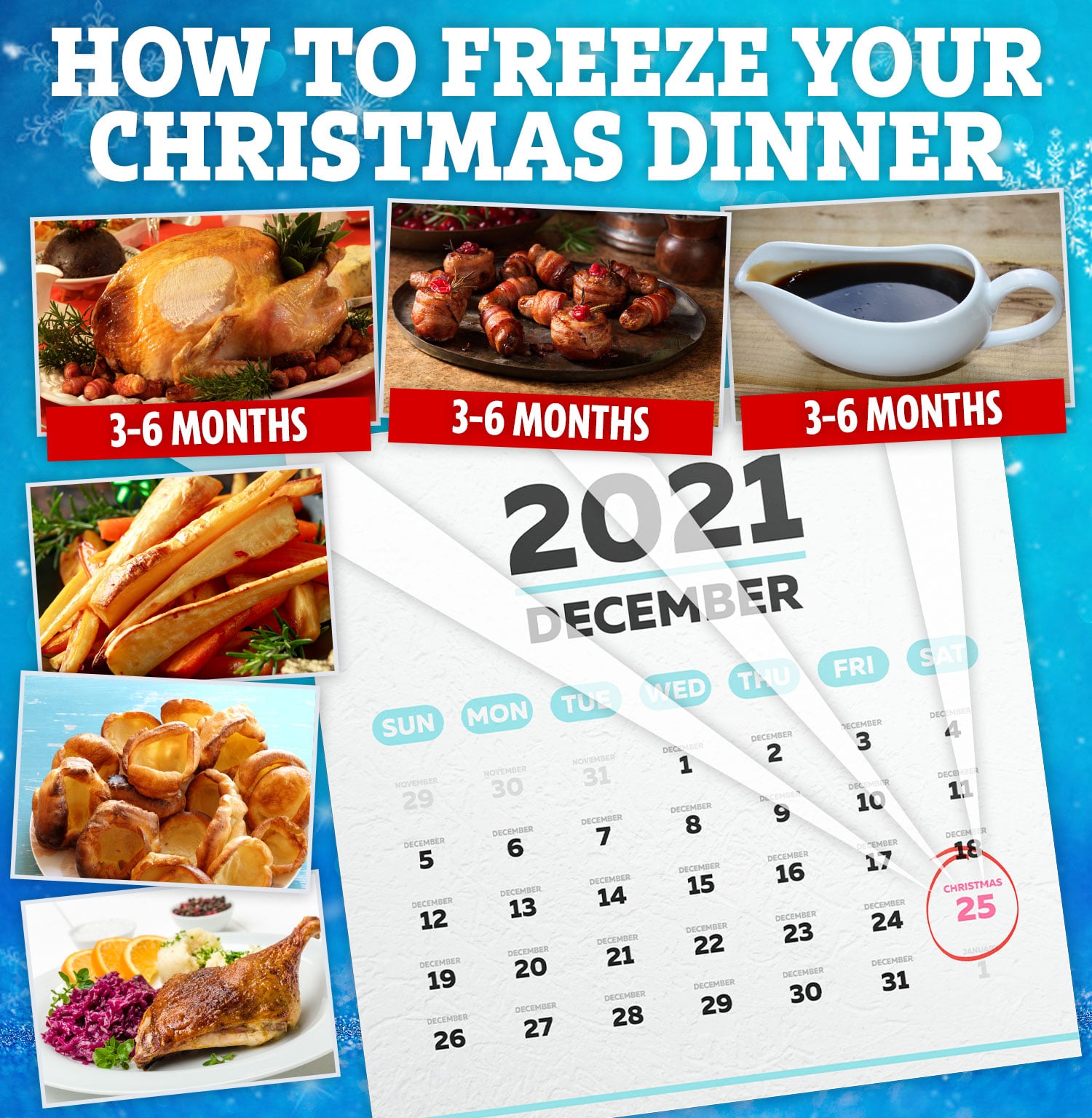 Shoppers have been warned that supply chain issues and a lack of lorry drivers threaten dinner table favourites over the holiday season.

A shortage of butchers means ham and pigs in blankets could be short on Christmas day tables, meat experts have warned.

Fears of food shortages are being blamed for the earlier rush to buy festive foods.

But there should be plenty to go round and no one should panic buy, though there may be fewer options of festive food on supermarket shelves.

It means many Brits might be considering stocking up on frozen items earlier rather than buying fresh nearer the big day this year.

But what can you freeze and how long for? We explain what's safe and what to avoid when buying your frozen festive faves.

Turkey, pigs in blankets and other meats

The main meat of the day can often be bought frozen rather than fresh at Christmas.

Meat can last for a long time in the freezer, according to the The Food Standards Authority (FSA), but you don't want to leave it too long as the quality deteriorates.

It's best to eat meat within three to six months of popping into the freezer.

"The freezer acts as a pause button – food in a freezer won't deteriorate and most bacteria cannot grow in it," The FSA told The Sun.

That means for the best tasting turkey at teatime come Christmas day, you can start buying from now onwards.

The same goes for pigs in blanket, ham and gammon, as well as prawns.

All meats can be frozen for some time, but eating within 3-6 months will keep it at its freshest.

The packaging on any festive meat you buy should also tell you how the item should be stored in the freezer, so check this too.

And you can also freeze raw pigs in blankets that you make yourself from uncooked sausages and bacon.

It's best to ‘open freeze’ them on a tray first, and then transfer the piggies to an airtight container, the FSA says.

It means they won't stick together and you can cook smaller amounts at a time.

For shop bought sausages wrapped in bacon and other meats, you want to make sure you get them into the freezer before the use by date on the label.

It's not Christmas without sprouts on the side of your plate.

These greens and other veg you buy from the freezer section of the supermarket that's already frozen will have guidance on how long it lasts for on the packet.

Generally items frozen at the right temperature (-18) will last for 3-6 months.

When it comes to fresh veg, carrots and potato's don't freeze well, according the BBC's Good Food, while veg with a high water content like lettuce and tomato's will go soggy.

You can can freeze cooked vegetables which have been boiled for around five minutes, the FSA says.

Helen White, special advisor on household food waste, at Waste Resource Action Programme (WRAP), said: "Potatoes need to be stored in a cool, dark, dry place, but they aren’t going to last until Christmas if you buy them now!

"You could parboil and freeze them to get ahead."

Blanching veg like this means they keep better when frozen, but wait for them to cool completely before popping them in.

Freeze them first by spreading out on a tray, like with the pigs in blankets, and then put them in storage containers or bags.

They should last for 3-6 months in the freezer too if kept under the right conditions.

Frozen veg – whether fresh originally or bought frozen – is cooked straight from the freezer, you don't need to defrost first like with meat.

Stuffing can be made and cooked now and frozen for the big day, lasting for three to six months.

Again, open freeze them first, White recommends, and then defrost them first before reheating.

You'll only be able to reheat these once though, as they've already been cooked once before.

Gravy can be made now and frozen for three to six months, and so can bread sauce.

The same goes for cranberry sauce if you're planning on making your own. It's better to make the sauce and then freeze it for alter, rather than the raw cranberries.

If you like a yorkshire pudding with your Christmas dinner, you can make them ahead of time and pop them in the freezer.

"Open freeze, so they don’t all stick together and transfer into
an airtight container," says White, and they will last three to six months.

"Re-heat from frozen, until piping hot," she adds.

How to keep food at its best in the freezer

The optimum temperature for your fridge is -18 according to the FSA.

Freezers also run more efficiently when filled up, though don't overstuff it as the cold air won't be able to circulate.

If you plan to freeze a fresh item, then it's best to put it in as soon as you buy it when it's at its freshest.

You can freeze something right up to its use by date though.

Whatever you're popping in the freezer, you should label and date it if it's in an air tight container or sealed freezer bag or wrap.

That way you know what’s in there and when you froze it.

This will also stop food getting ‘freezer burn’, which affects the taste when it is cooked.

It's worth checking packaging you bought it in of it's going straight into the freezer, and fixing any rips or tears with your own wrap to avoid this too.

The NHS recommends that you never refreeze raw meat (including poultry) or fish that has been defrosted.

But you can cook frozen meat and fish once defrosted, and then refreeze the leftovers once cooked.

How to keep food safe when defrosting

You need to defrost meat and fish thoroughly before cooking, the NHS advises – lots of liquid will come out as meat thaws, so stand it in a bowl to stop bacteria in the liquid spreading to other things

The FSA also reminds people that large items can take some time to defrost, so plan ahead so you take it out early enough.

For example, a 6-7kg Christmas turkey, can take as much as four days to defrost fully in the fridge.

You can also use the defrost function on the microwave directly before you're ready to cook your turkey, pigs in blankets, ham or gammon (if it fits) says White.

Frozen raw foods can be defrosted once and stored in the fridge for up to 24 hours before they need to be cooked or thrown away.

Most vegetables can be cooked straight from frozen, whether you bought them fresh first or from the freezer aisle.

The same defrosting advice applies to leftovers too.

The rule to remember is only reheat once, says white.

Do you have a story for The Sun Online Money team?

Kelly Osbourne opens up about drug and alcohol addictions

What Greta Thunberg Means For Autistic Women Like Me