The first Australian prime minister to step up to the births, deaths and marriages roll in SBS’ long-running genealogy series, Who Do You Think You Are?, Malcolm Turnbull was prepared for the odd skeleton in the family closet. At the risk of spoilers, what he found, along with one of those, was an intriguing mystery of missing inheritance, convict links, a tenacious politician, and parallels with his own childhood growing up with his father, after his mother moved to New Zealand. For him, it was a “fascinating and inspiring” experience that left him the richer, not only in his understanding of his lineage, but of the nation’s history. 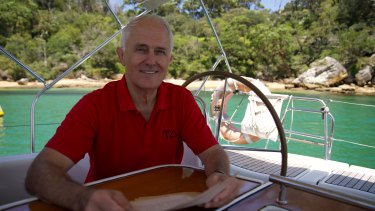 Who Do You Think You Are? Malcolm Turnbull.Credit:

“It is, and is so often the case, a story of triumph matched by tragedy,” he says. “Telling the truth is critical and this is where it particularly applies to the history of European invasion of Australia.”

Airing on Tuesday, June 15, following Celia Pacquola’s episode that begins this 12th season, and preceding others’ including Denise Drysdale, Grant Denyer and Uncle Jack Charles, Turnbull’s episode is filmed largely on or near water, the Sydneysider extolling his lifelong love of the beach and harbour. It is onboard a boat travelling up the Hawkesbury River, that he learns of convicts from the notoriously brutal Second Fleet who settled there.

“There’s a myth that they were all transported for stealing a loaf of bread, which of course is not true. You accept that most of the convicts were thoroughly guilty. They didn’t deserve the harsh punishment that they got, but that was the nature of the past. What is remarkable is that so many of them got to Australia and then went on to build successful lives and laid the foundations of modern Australia, but obviously at the expense and enormous hardship and dispossession to the Indigenous Australians … We didn’t find in this study any evidence of direct violent contact between those forebears of mine with Aboriginal Australians, but the reality is, the land that they settled on was Aboriginal land. So they took something that had been somebody else’s.”

He remembers his grandparents talking up their “free settler” heritage.

“That generation would still have been very circumspect about the convict part of the family tree. I don’t know that they would have denied it but they wouldn’t have emphasised it.”

It is in this region that Turnbull discovers that he is not the only member of his family to have held public office: an alderman back down the line staged a political comeback, like Turnbull, and refused to concede defeat, like a certain former US president.

“He challenged his electoral defeat – that was good! Politics changes obviously with every generation but there are certain fundamentals: it’s a people business and it’s about communication and it is tough game.”

Of course, Turnbull’s descendants won’t have to search far and wide to learn about him, should one of them find themselves participating in the 4000th episode of Who Do You Think You Are? He hopes his legacy will make them proud.

He hopes viewers are similarly inclined to research their own ancestry.

“I found it an interesting exercise and I hope that it encourages other people to learn a bit more about their family background. I found it quite inspiring, just the tenacity and courage of some of my forebears … History is both personal and local and national. Our national history is made up of a whole set of personal stories.”

Who Do You Think You Are? returns Tuesday, 7.30pm, SBS