Quite the influencers. Prince Harry and Meghan Markle formally posed together for their first magazine cover shoot for TIME100, the magazine announced on Wednesday, September 15.

The pair were named part of Time magazine’s 100 most influential people of 2021. José Andrés, World Central Kitchen founder, wrote the feature on the duke, 37, and Duchess of Sussex, 40.

“Springing into action is not the easy choice for a young duke and duchess who have been blessed through birth and talent, and burned by fame. It would be much safer to enjoy their good fortune and stay silent,” Andrés penned in the magazine. “That’s not what Harry and Meghan do, or who they are. They turn compassion into boots on the ground through their Archewell Foundation. They give voice to the voiceless through media production. Hand in hand with nonprofit partners, they take risks to help communities in need—offering mental-health support to Black women and girls in the U.S., and feeding those affected by natural disasters in India and the Caribbean.” 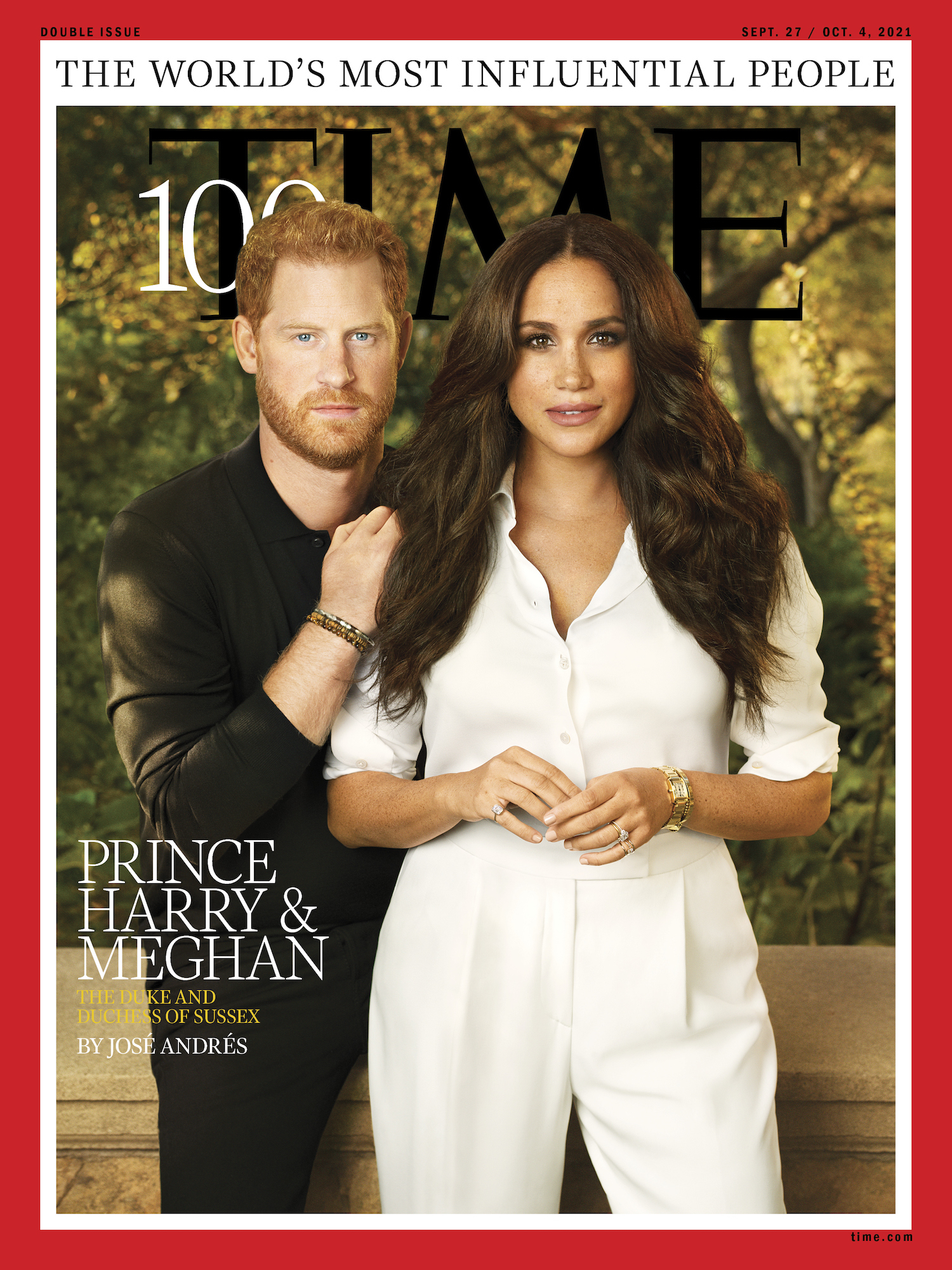 The pair, who are parents of Archie, 2, and Lilibet, 3 months, thanked the magazine via their Archewell website on Wednesday.

“Prince Harry and Meghan, The Duke and Duchess of Sussex, are not only humbled to be part of this year’s TIME 100 through the words of friend and partner José Andres, but to also write in praise of Dr. Ngozi Okonjo-Iweala for the publication’s annual list of Most Influential People,” the couple, who tied the knot in May 2018 and stepped down from their royal duties two years later, wrote in a statement. “Since becoming the Director-General of the World Trade Organization in March, Okonjo-Iweala has astutely been hailed for the groundbreaking nature of her appointment to the role; the first woman and the first African to assume the position. What further sets her apart, and makes her leadership all the more trailblazing, is her ability to see the COVID-19 pandemic as a crisis with significant implications for both health and economic security.”

Prince Harry and Meghan Markle’s Royal Drama: What to Know

The magazine cover came out on the prince’s birthday and amid a family strain. However, he still received well-wishes from the royals.

“Wishing The Duke of Sussex a happy birthday today,” Prince William and Duchess Kate wrote via the official Twitter account, sharing multiple photos of Harry, and one with the former actress.

Prince William and Prince Harry’s Complicated Relationship Over the Years

“The relationship between Harry and William is still very much one of distance,” royal expert Omid Scobie recently told Entertainment Tonight about the brothers. “I don’t just mean physical [distance], across the Atlantic, but they are not talking that much, and that is exactly how sources close to William have put it.”

William, 39, and Harry have reunited twice since the British Army native’s move to Montecito, California. They first came together in April for the late Prince Philip’s funeral and again in July for the unveiling of their late mother Princess Diana’s statue.