Pallet playground! Handy dad crafts a wooden climbing frame – complete with a slide – for his children using left-over wood and saves himself £900

A creative father-of-four created a lockdown playhouse for his children using a stack of old wood pallets.

Jamie Purchase, an electrician from Scunthorpe, said he saved around £900 by making the house himself instead of forking £1,200 for a similar new one.

Sharing his results on the Extreme Couponing and Bargains UK Facebook group, Purchase was met with hundreds of compliments from other bargain-loving parents.

Many said they would try to create similar structures in their own garden. The carpentry fan told Femail how he created the playhouse and urged woodwork fans to have a go at recreating it at home. 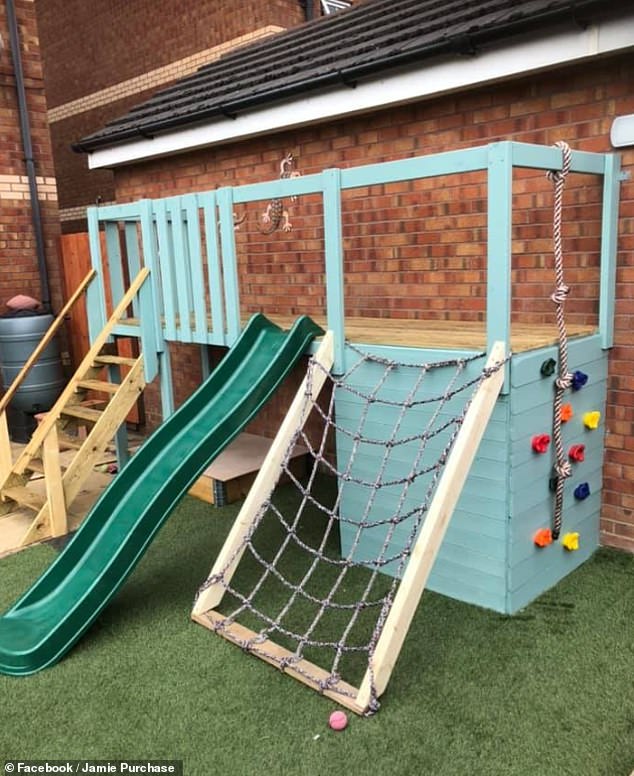 Ta da! Jamie Purchase, an electrician from Scunthorpe, created a playhouse for his children from scratch using old wood pallets. He says a brand new one would have cost him £1,200 if he’d bought it in a shop 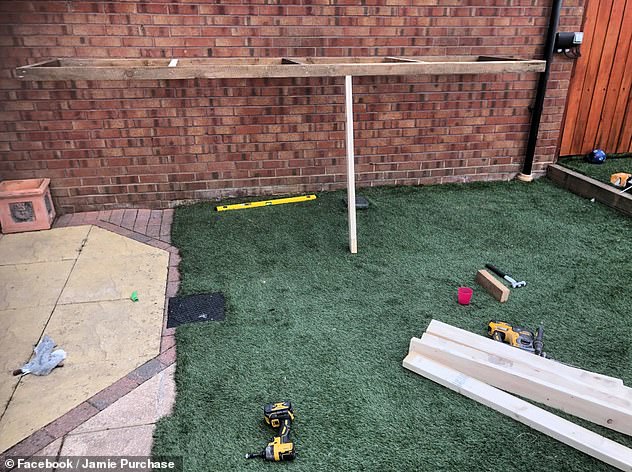 Before: The father-of-four started by nailing the house’s frame to his house’s wall in his garden, using a power drill

The crafty dad-of-four started by drawing a sketch of how he wanted the house to look like.

He used both reclaimed wood and new pallets in order to bring his design to life, as well as his faithful toolbox and says he spent less than £300 all in, after he’d bought the new slide and climbing kit.

Purchase started by nailing the playhouse’s frame to his house’s wall and supported it with legs made of wooden pallets to make it steadfast.

The amateur carpenter then built some railings to secure the structure, and moved on to creating the stairs. 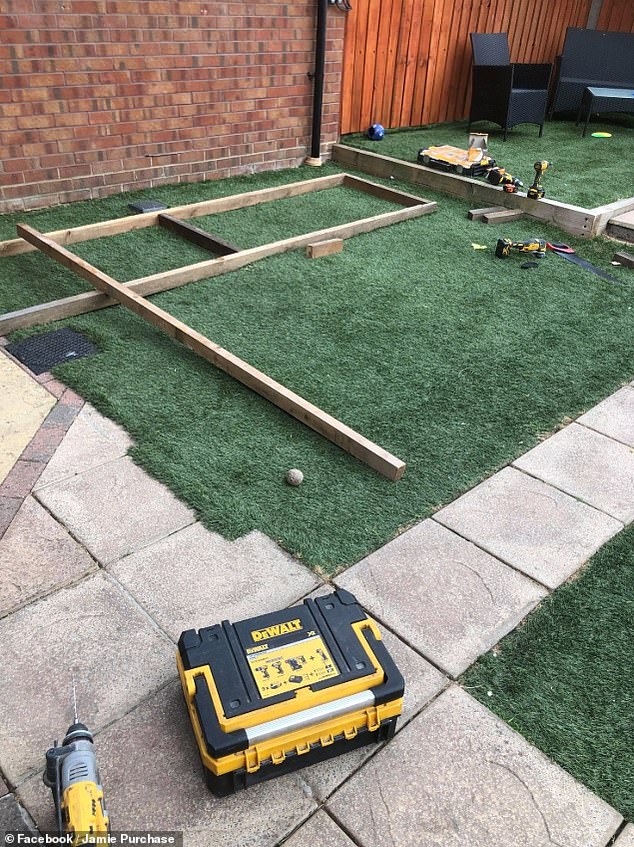 Jamie had drawn a sketch of how he wanted to playhouse to look like and then got to work to make it a reality, using his toolbox and re-purposed wood pallets, as well as others purchased especially for the project 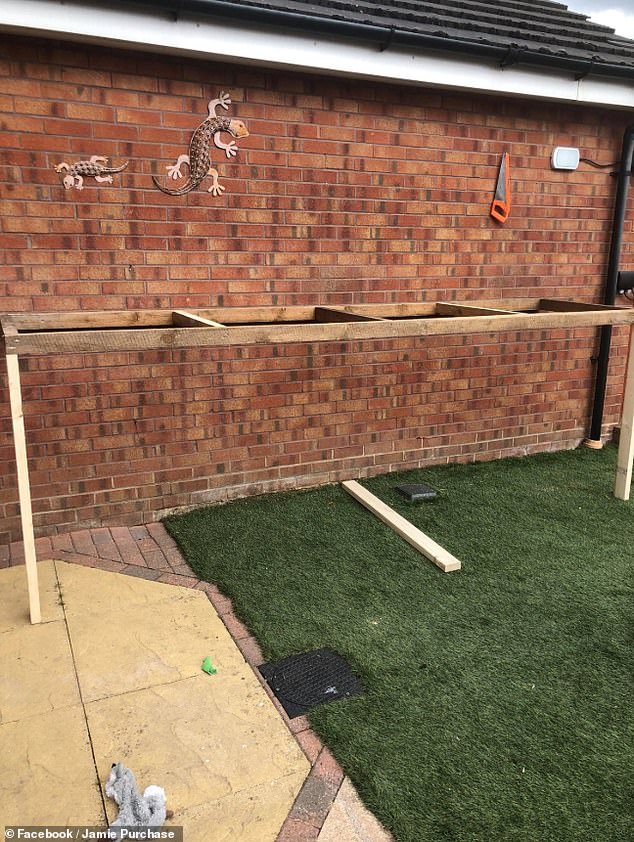 Taking shape: Jamie then assembled the pallets to created a frame, using two wooden legs on each side to support it 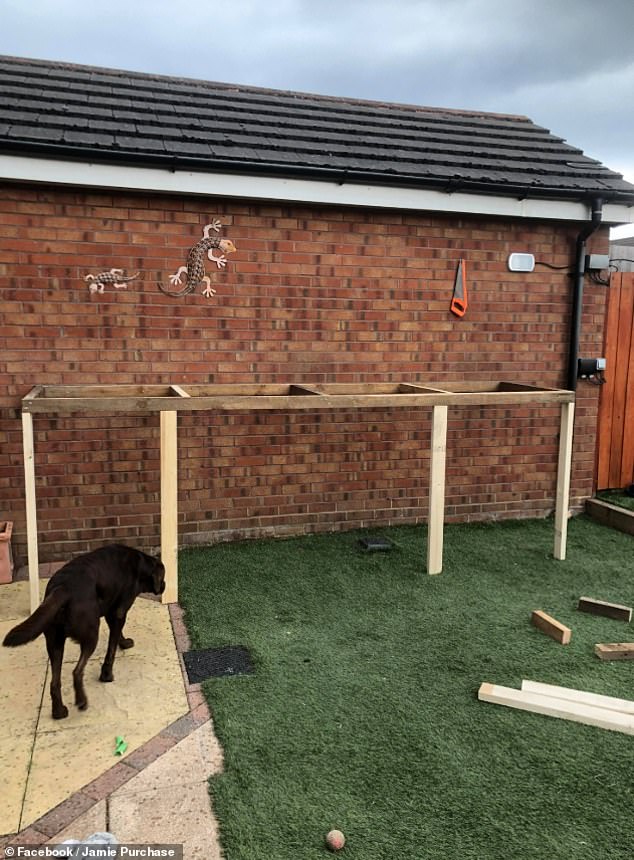 Once the frame was drilled into the wall, he created four sturdy legs for the house, which stretches four metres

He added a banister around the house, and took his youngest son’s measurements – he’s almost two years old – to make sure they fitted him.

For the finishing touches, Jamie then sanded the wood to prevent any shards or hard edges, and varnished it, before painting the banister and railing in light blue.

He added a green slide and a net on the front of the house, as well as a climbing wall on its side. 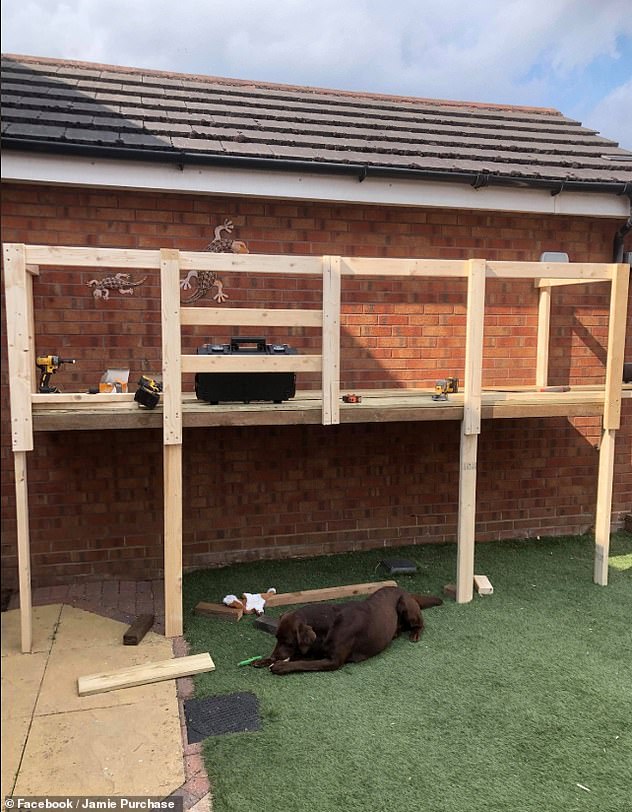 Jamie used other pallet to create the playhouse’s flooring, as well as a security railing, which fit the measurements of his 22-months-old son 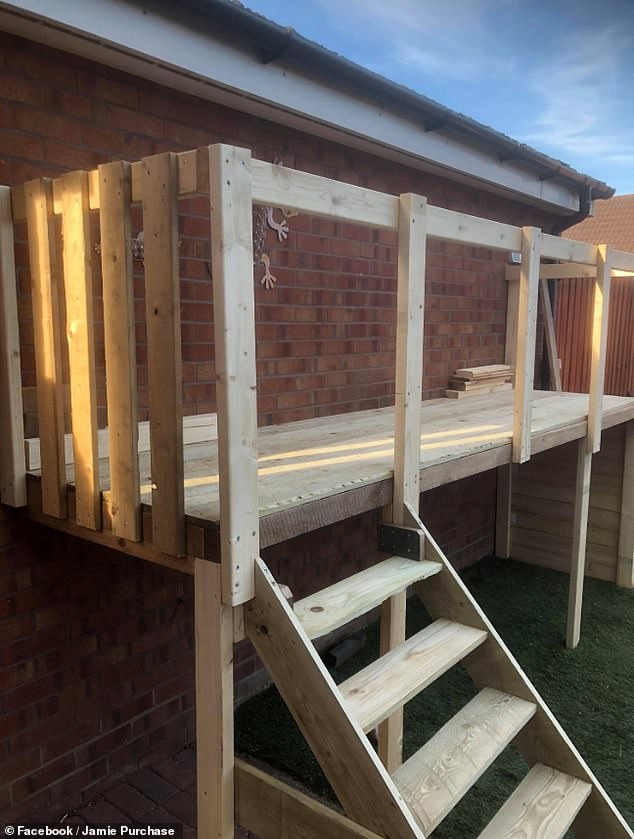 The handy dad created stairs with the same wood and nailed it to the structure. He then used other pallets to create a banister 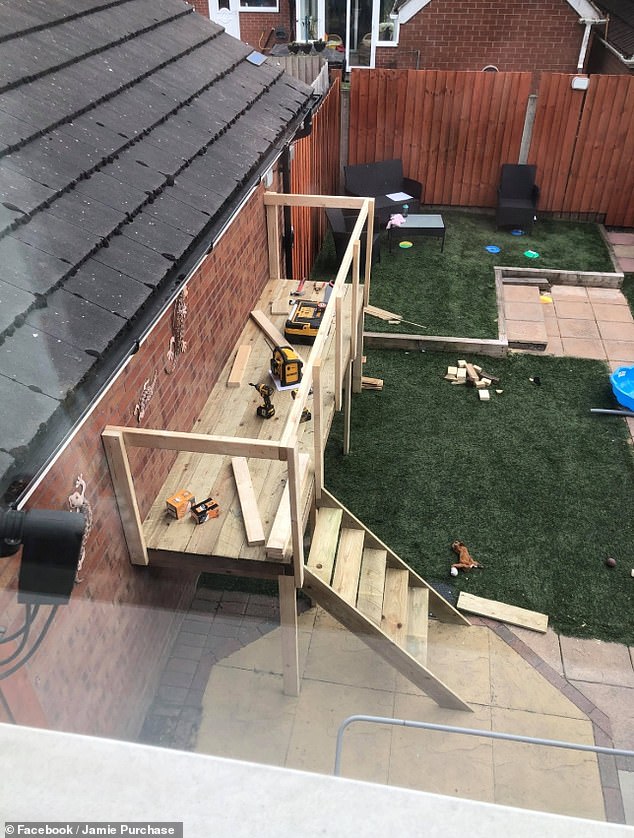 The playhouse viewed from above during Jamie’s ambitious DIY project, after he created the railing and stairs

Praise: Parents loved Jamie’s DIY project and some were inspired to do the same for their own children

Parents were inspired by the electrician’s design and some felt motivated to do the same for their own children.

‘The boys would love this,’ one wrote, praising this creativity.

‘Maybe we could do this for the kids, said another.

‘This is awesome,’ simply put another. 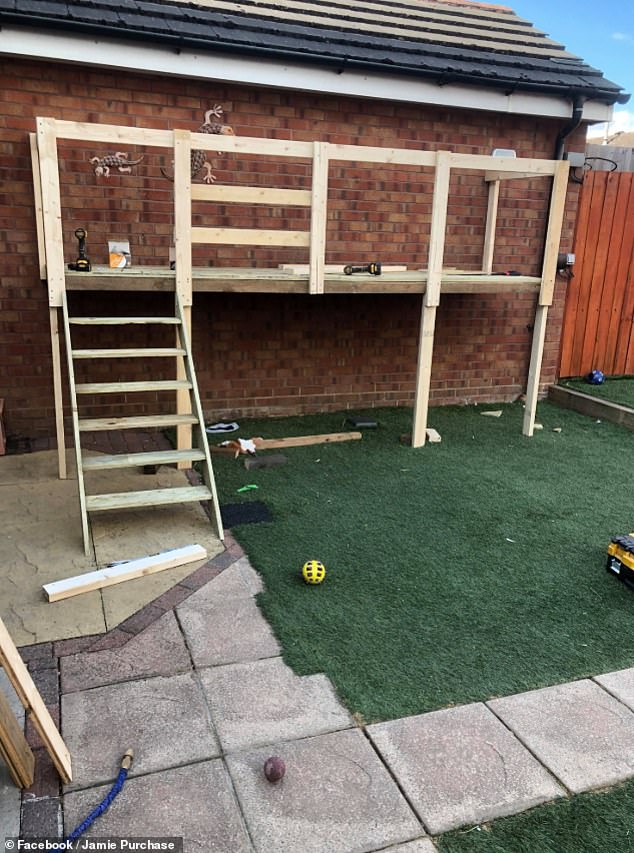 The structure, before Jamie got to paint it. He left enough space at the front to fit a slide and a climbing net 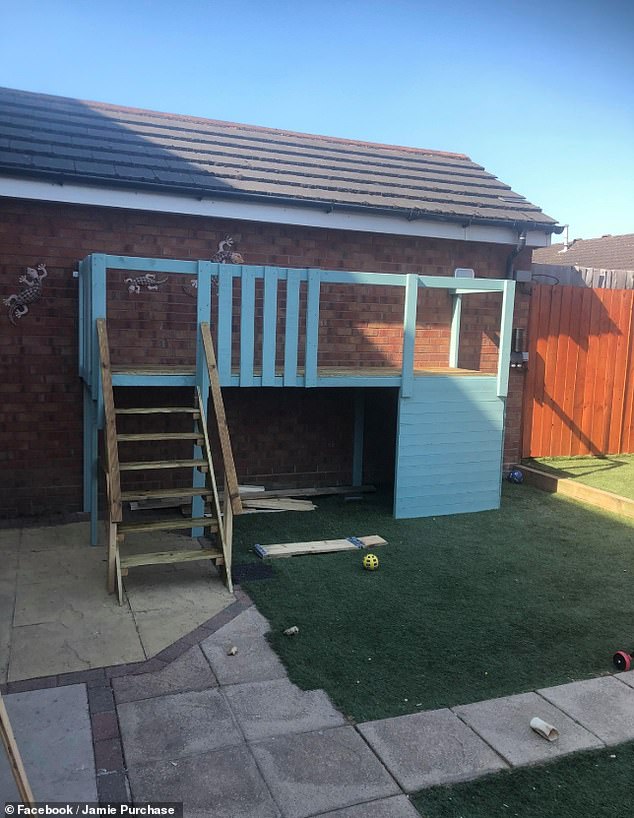 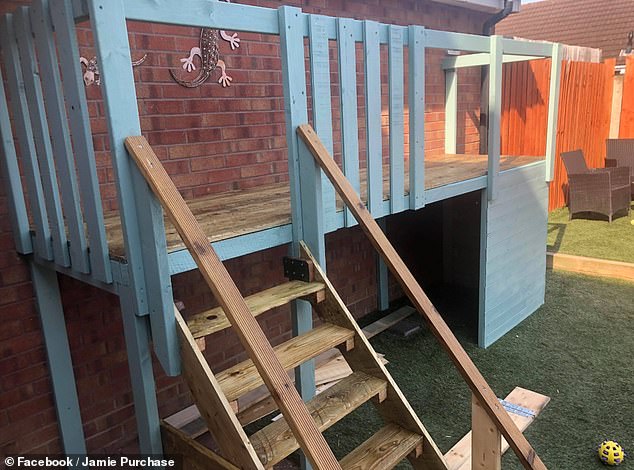 Jamie painted the banister, railing and legs of the house in light blue but kept the stairs as they were 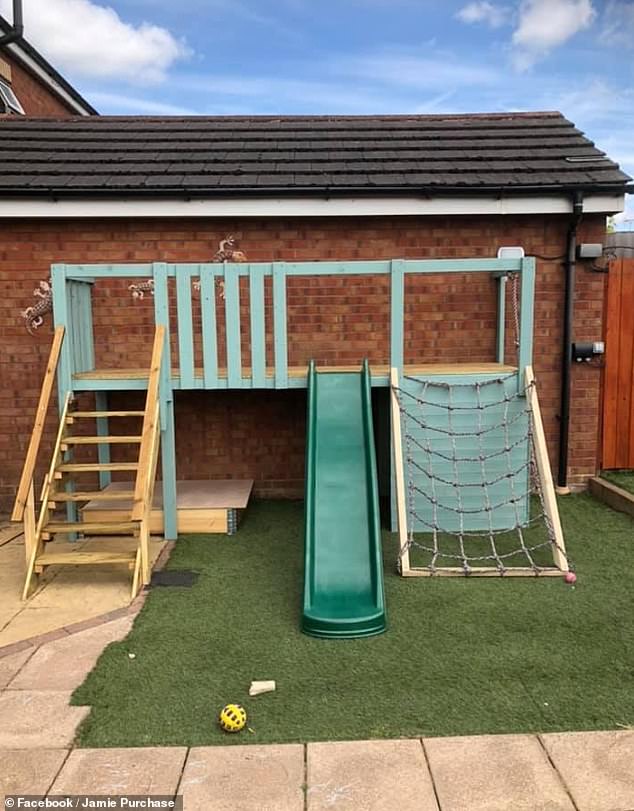 There you go! At the end of the project, Jamie added the slide and a climbing net, alongside a climbing peg on the side of the house

Little girl runs in circles after finding out mom is pregnant