Home » Lifestyle » Get To Know These Black Artists in NYC

Nothing speaks to the culture and vibrancy of a city like art—and New York City is no exception. And to fully engage in The Black Experience in NYC , we want to introduce you to some of the incredible Black artists who call this city home and show you where you can view some of their signature pieces. 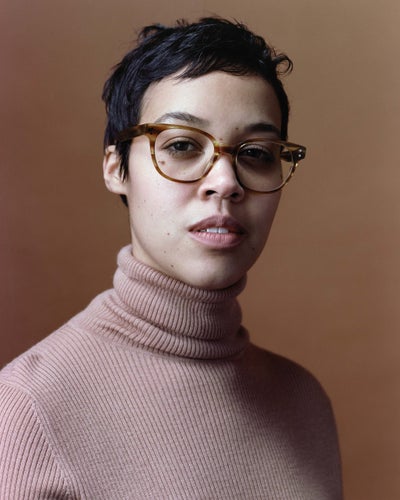 Jordan Casteel, New York City and Catskill Mountains
Best known for her portraiture, Jordan makes vibrant, larger-than-life canvases. She finds inspiration from the people around her: friends, family, students, and subway riders.
About her art. Composed with gestural brushwork and bold swathes of color, her portraits and landscapes offer honest reflections of everyday life.
Where can you see her work? When you’re in New York City, you can see her pieces at the Museum of Modern Art, The Metropolitan Museum of Art, and when you walk along the High Line. Where the park crosses 22nd Street, you’ll see the mural “The Baayfalls,” which recreates a painting on canvas of the same name originally made in 2017.

Hank Willis Thomas, Brooklyn
A conceptual artist, he finds inspiration in popular culture, specifically in people’s perspectives and identities. Hank works in a variety of mediums, from sculpture, photography, and mixed media to installation and video.
Where can you see his work? In 2019, he unveiled his permanent work “Unity” in the western median of the Tillary Street and Adams Street intersection in Downtown Brooklyn—a 22-foot-tall bronze sculpture of an arm, hand, and index finger pointing to the sky.
What he says about this special project. “This sculpture is an homage to and celebration of the unique and multifaceted character of the borough of Brooklyn,” Hank told DowntownBrooklyn.com. “The spirit of Brooklyn has always been about upward mobility and connection to roots. This sculpture of a bronze arm pointing toward the sky is intended to convey to a wide audience a myriad of ideas about individual and collective identity, ambition, and perseverance.” 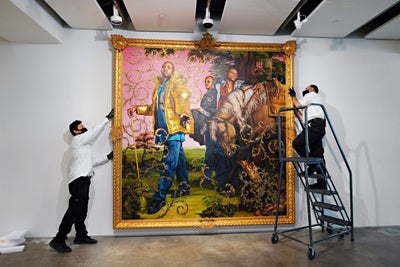 Kehinde Wiley, Brooklyn
A portrait painter based in New York City, he is known for his highly naturalistic paintings of Black people, frequently referencing the work of Old Master paintings.
What he says about art: “I think art should do more than point,” says Kehinde. “Art should have an opinion, it should be something that says, ‘I believe in this, more than that,’ even if it is a bowl of fruit or flowers.”
Where can you see his work? This year Kehinde unveiled a new exhibit at the National Gallery in London: The Prelude. Click here to get a peek at it and see what he says about this exhibit. But if you want to see his art closer to home, simply take the subway to Penn Station. Head to the 33rd Street Midblock Entrance Hall and look up to view Kehinde’s hand-painted glass triptych. “Go” is a depiction of young, Black New Yorkers in poses that feature inspiration from breakdance moves. 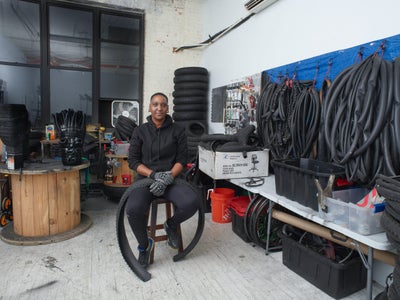 Kim Dacres, Harlem
A first-generation American artist and sculptor of Jamaican descent, Kim reimagines found tires and rubber, transforming them into sculptures that celebrate the influential people in her life.
What she says about her art. “I love working with this material, so much of it reminds me of Black folks,” says Kim. “Since I live in Harlem, there’s a lot of braids, a lot of charisma, a lot of confidence.”
Where can you see her work? Her latest exhibit, “Arrangements in Black,” ended in August at Philipson Park Avenue in New York City. But you can still catch a glimpse of it here in this video. 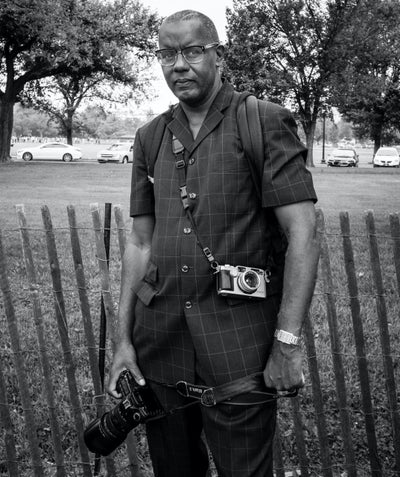 Jamel Shabazz, Brooklyn
A fashion, fine art, documentary, and street style photographer, Jamel began experimenting with his photography at the age of fifteen. He captured the lives of his friends—eventually developing a style that showcased everyday people in everyday life.
What he says about his art. As he told The New York Times, his ambition was “to make a connection and forge relationships.” The author of five monographs, he is presently working on a new book, titled “The Book of Life.”
Where to see his art? Jamel’s retrospective, “Eyes on the Street,” was recently featured at the Bronx Museum of the Arts. Click here to experience his work and see his upcoming new exhibits.

Andre D. Wagner, Brooklyn
A self-taught artist, Andre uses photography to bring out the beauty of everyday life, especially city streets, neighborhoods, parades, public transportation, and, of course, people.
What he says about his art: Andre told TheArtistEdition.com, “I realized that when I was taking portraits I would always take these pictures of random in-between moments, which kind of interested me more.”
Where can you see his work? Finding inspiration in the small moment, his work is regularly featured in photo essays for The New York Times and magazines like The New Yorker and Fortune. But a real standout is his work on “Black Americana,” a photo essay directed by Regina King featuring Viola Davis for W Magazine. Plus, his photography for the 2019 film “Queen & Slim” has risen to iconic status thanks to the film’s reflection of the modern Black American experience.

To explore more of the Black Experience in New York City, from arts and entertainment to Black-owned restaurants and businesses, click here to start planning your trip.

Which player will provide the most assists at Euro 2020?