Home » Lifestyle » From the Archives, 1987: Meldrum shines in final Countdown

The ABC pop music show ‘Countdown’ ended last night as it began 13 years ago – with teenagers screaming and compere, Ian “Molly” Meldrum, punctuating his speech liberally with ums and ahs. 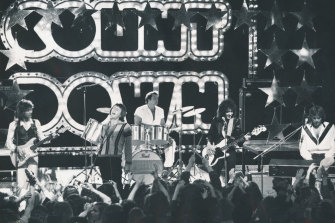 Sherbert performs on Countdown in 1977.

Viewers had their last chance to see ‘Countdown’ and inimitable Meldrum at the Sydney Entertainment Centre.

Among the audience was the ABC’s managing director, Mr David Hill, and a host of guests from the Australian rock industry.

Mr Hill, who wore jeans and was seen often tapping his feet, said he was sad to see the program end but understood it was time to move on.

“It was fantastic. It went out with a bang and not with a whimper,” he said.

Meldrum made the most dramatic gesture in the hour-and-a-half by finally acquiescing to many requests that he take off his cowboy hat, only to reveal that he shaved all his hair off. 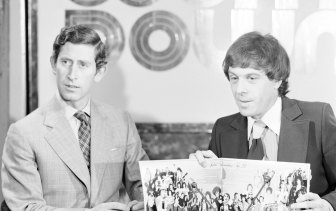 At the end of the broadcast singer John Farnham described Meldrum as a man who had done a lot for this country’s rock industry.

Mr Hill said at the end of the broadcast that while it was sad for everybody to see the end of an institution such as ‘Countdown’ “there aren’t many programs that can run at the top for more than a decade in Australian television.”

Mr Hill said he suspected that Meldrum would be back at the ABC at some stage “as he is too much of an institution and an authority for him not to be back.”

The end of an um, er era

The saddest part of the final ‘Countdown’ and the Countdown Music and Video Awards (Channel 2 6 pm and 7.30 pm) was not so much the demise of both shows as the ABC’s stinginess in not simulcasting the programs.

Here we had the best of Australian talent on parade and, even if most of the performers — with Crowded House and John Farnham the notable exceptions — mimed on stage, it was still a unique opportunity to bring their music to us in glorious stereo. If a simulcast was good enough for the following program, a 90-minute special on classical singer Placido Domingo, why wasn’t it for the final `Countdown’ awards night?

There was great irony last night in that the final awards night probably also was its best, certainly when compared with last year’s disaster. It probably had a lot to do with the fact that appearances by Ian “Molly” Meldrum were kept to one, at the very end.

The two big winners of the evening were the two names that right now are the best advertisement for this country’s music industry, John Farnham, and Neil Finn’s all-conquering group, Crowded House, who between them won eight awards, four each. Farnham collected awards for best male performer in a video, best single, best album and for most outstanding achievement, the night’s main trophy. Finn and Co won best debut act, best video, best debut album and best songwriter (Finn).

Sad as it often is, not everybody can win. But spare a thought for that talented writer/performer, Paul Kelly, who discovered that fact not once, not twice, but three times last night: he was pipped for best writer, best single and best album, in a year when he produced his best. That was sadder than the demise of `Countdown’.

Zendaya Shuts Down Pregnancy Rumors: 'This Is Why I Stay Off Twitter'