Home » Lifestyle » Filmmaker, 28, sells his house to live off-grid in a solar-powered van

Marvel filmmaker, 28, reveals he QUIT his life of luxury to live off-grid in a luxury $53K solar-powered ‘gaming van’ – and now travels the country full-time playing his favorite games

A filmmaker who worked on one of Marvel’s biggest blockbusters has revealed that he gave up his house to live off-grid in a $53,000 solar-powered gaming van.

Trent Arant, from Augusta, has spent the past three years travelling more than 100,000 miles across America in his trusty Ram Promaster 159′ EXT van.

The 28-year-old, who has worked on titles such as Rings and Avengers: Infinity War, said that he took the leap after he and his live-in girlfriend broke up.

The keen gamer now documents his travels on YouTube as well as his adventures on World of Warcraft, Halo Infinite, Overwatch and Runescape. 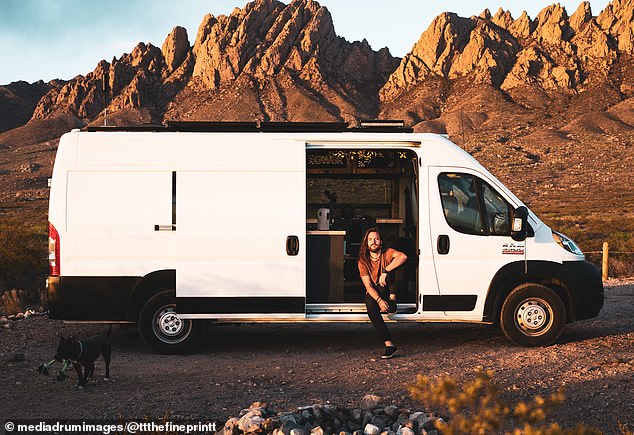 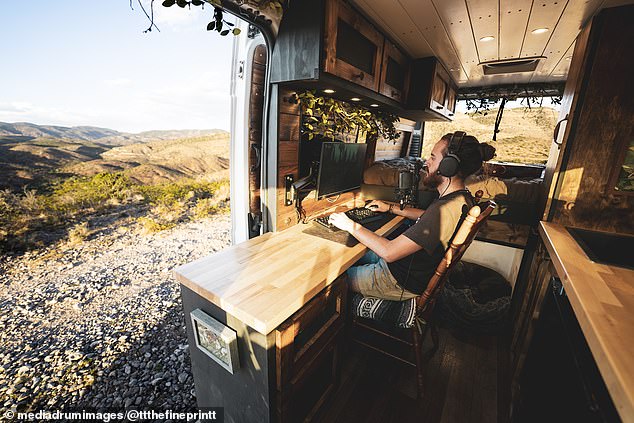 Trent started out by converting a $6,000 transport van from Craigslist into a camper with the help of his brother.

The keen gamer later swapped the old Dodge Ram for a brand new Ram Promaster 159′ EXT van, which he bought for $38,000, before spending $15,000 to refurbish it to include all his gaming equipment.

He has since been traveling around 3,000 miles each month with his Staffordshire Bull Terrier, Millie, whilst still being able to play his favorite games, World of Warcraft, Halo Infinite, Overwatch and Runescape.

‘Life was pretty good and honestly during that time, I was the happiest I’ve ever been.

‘But like most relationships, ours fell apart quickly. And that heartbreak really shook my world and it really put my life into perspective for me.

‘I wanted nothing more than to just travel the world and escape this hurt that I was going through. So I did exactly that.

‘I bought an old handicapped transport van – a Dodge Ram B3500 – off Craigslist for $6,000 and over the course of the next three months, my brother and I converted it into a camper.

‘But after a year or so of travelling in that old van, I decided I wanted to continue this lifestyle and upgrade to a newer van so I could continue to travel without worrying about my van breaking down.

‘Plus I just wanted to build a new van with new things I learned over the past year or so of living in the old van.’

‘Over the course of four months, I built it into this luxury gaming van,’ he said.

‘And during that build process, I probably put about an additional $15,000 into the build itself. And that includes all the appliances, lumber and miscellaneous things I had to purchase in order to complete the build.’ 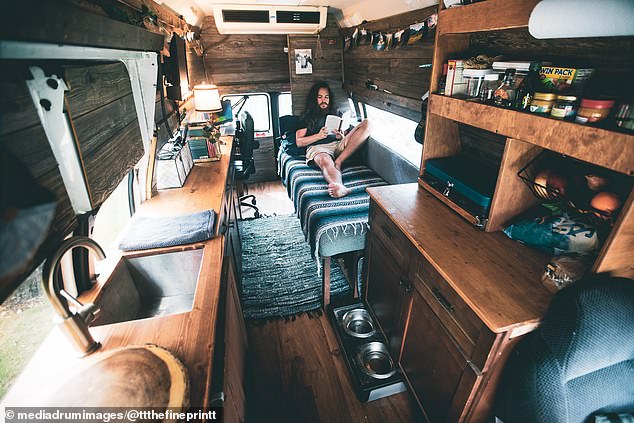 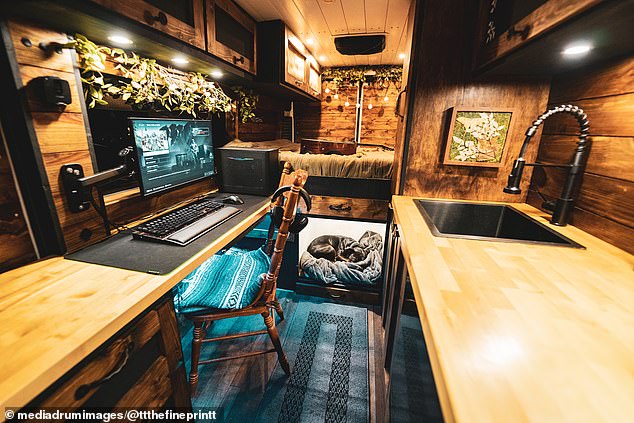 He has since been traveling around 3,000 miles each month with his Staffordshire Bull Terrier, Millie 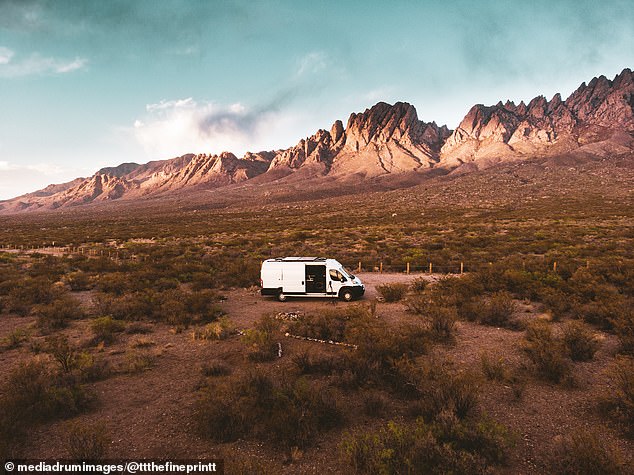 Trent’s van (pictured) is fully decked out for gaming, with 600 watts of solar panels mounted on the roof of his van to charge his 620 amp hours of AGM batteries

Trent had always envisioned making a better life for himself having grown up living paycheck to paycheck.

While he had already made a name for himself in the film industry, Trent was ready to take back his own narrative as he grew comfortable in this new way of living.

‘While working on those big films was fun, I consistently found myself longing to create and tell my own story,’ he said.

‘So that’s why I started up a YouTube channel – ttthefineprinttt – to document my life as I travel across the country in my van with hopes to inspire people to seek the life they truly deserve.’

On Trent’s YouTube, he documents not only his travels, but his gaming adventures too, including a series where he plays horror games in America’s creepiest places.

‘I grew up watching my older brother play Resident Evil among many other games on the Playstation,’ he said.

‘But when my family got a home computer in 2004, I started my own gaming adventure playing an Age of Empires demo that came with our computer. 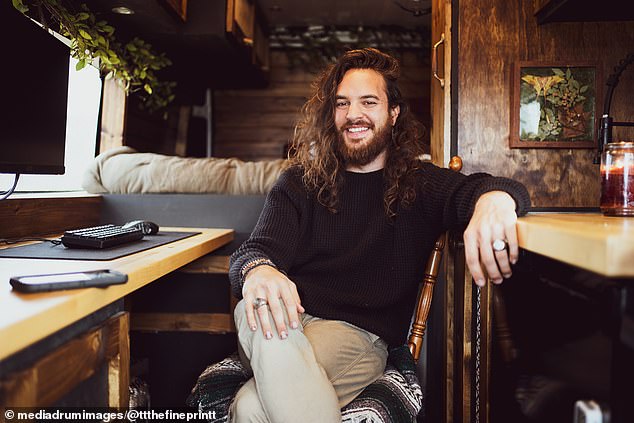 The keen gamer (pictured) now documents his travels on YouTube as well as his adventures on World of Warcraft, Halo Infinite, Overwatch and Runescape 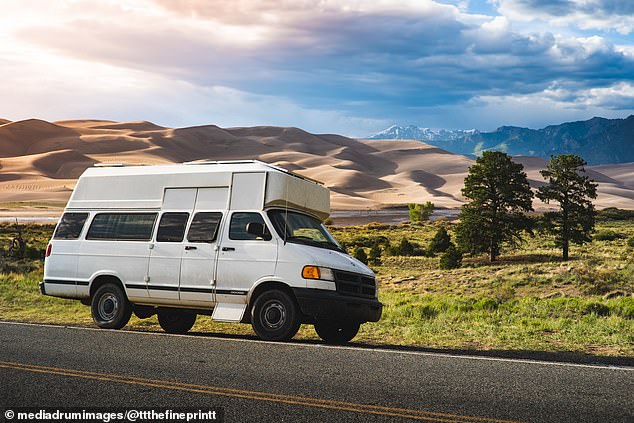 Trent started out converting a $6,000 transport van from Craigslist into a camper (pictured) with the help of his brother

‘I love how alive the world feels as you’re adventuring about and you cross paths with other players.

‘You can customize your character and play the game at your own pace without having to follow the main storyline. If I wanted to just use it to hang out with my friends virtually, I could – and I loved that.

‘But I think overall, video gaming for me has always been an escape from the world around me.

‘During that time of my life when I first discovered video games, my family was going through a lot and having something like Runescape to distract me certainly helped me get through all of that.

‘So because of that, I think video gaming will always have a special place in my heart.’

Trent’s van is fully decked out for gaming, with 600 watts of solar panels mounted on the roof of his van to charge his 620 amp hours of AGM batteries, powering the whole van – including his gaming PC.

‘This system allows me to live and game off-grid without much worry,’ he said.

‘However, I am in the process of upgrading from AGM batteries to Lithium batteries to really maximize my electrical system for off grid gaming.’

Trent says that while his friends and family were tentative about his new way of living at first, they have come around to the idea and are fully supportive.

‘When I first decided to live out of a van, my friends and family were a little skeptical of course,’ he said. 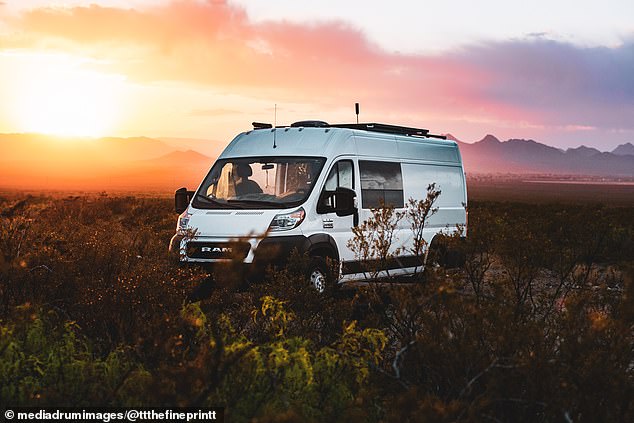 Filmmaker Trent has so far traveled more than 100,000 miles across America in his gaming van 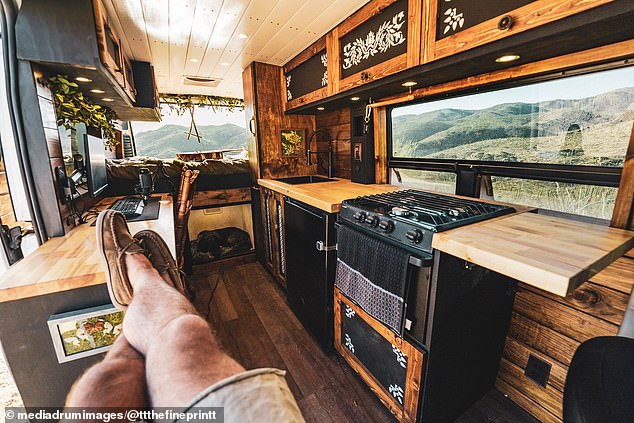 ‘But as they saw how much freedom this lifestyle allowed me to have, they started to warm up to the idea a little more.

‘Now that I’m not just living in a van, it’s now also my job to live, travel, and game out of a van, my friends and family talk about how much they really admire what I do.

‘I’ve created a life for myself that lets me live exactly how I want and that truly is the pure essence of freedom.

‘And that’s something everyone strives to get out of this life and somehow I’ve achieved that at age 28 and I truly am thankful for that.’

While he loves his gaming van life, Trent admits that there are some aspects of ‘normal’ life that he misses sometimes.

‘Recently I went back to my hometown to hang out with old friends that I haven’t seen in years and that really put my current lifestyle into perspective,’ said Trent.

‘Because, I won’t lie, after being a nomad and living in a van for three plus years, you start to miss living in a house, having neighbors, having a community you can always rely on, and especially not worrying about where you have to park for the night.

‘And these are all things that I see about this lifestyle that my friends don’t. So when I went back to my hometown, I found myself admiring their ‘normal’ life while they were admiring my ‘adventurous’ life which I thought was really interesting. 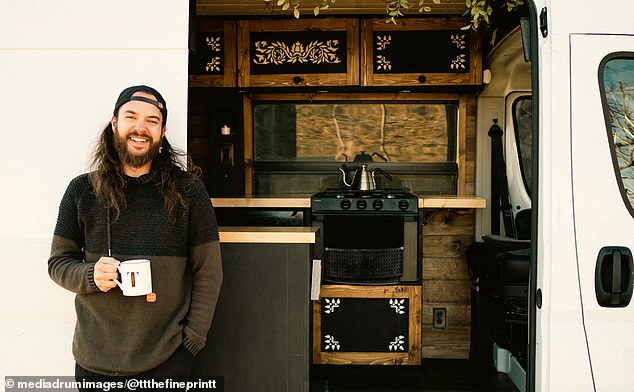 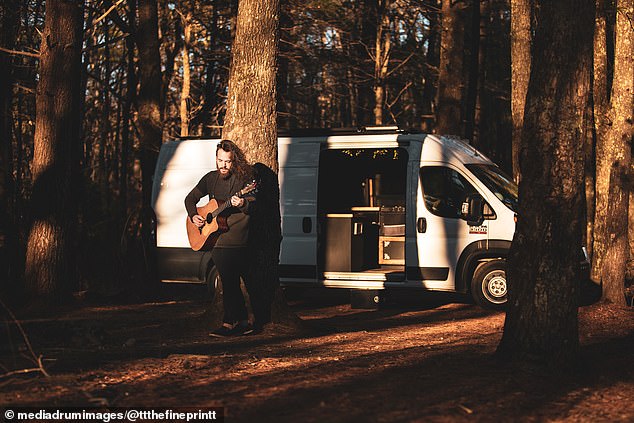 Trent (pictured) had already made a name for himself in the film industry on titles including Rings and Avengers: Infinity War

‘In a specific instance, one of my friends just bought a house and got married and I found myself being really excited for him while expressing that I’m jealous and I couldn’t wait for that day for myself.

‘He gave me a funny look like I was crazy and said, ‘dude, you literally live the perfect life. You travel around in one of the coolest vans I’ve ever seen. I’m jealous of you.’

‘And that’s when I sort of snapped out of my daydream and realized the ‘normal’ life sounds great, but the life I’ve built for myself is really awesome too and I’m not ready to give that up yet.’

One of Trent’s favorite moments from travelling the US was finding a remote hot spring in the Nevada desert.

‘If you don’t know what a hot spring is, it’s essentially a naturally fed hot tub out in the middle of nature and it’s a really bizarre experience to find one,’ he said.

‘And there are hundreds of them scattered throughout the US but this one in particular was really special to me because I had it all to myself.

‘It was located far from civilization and I didn’t see a soul for a week and on top of that it was surrounded by snow capped mountains and the view was absolutely stunning.

‘And having the ability to just pull right up to it and soak in the hot spring with the incredible view for days at a time truly felt like paradise.

‘I could wake up in the morning, step right outside my van and hop in the hot spring for a morning soak as the sun rose behind the mountains and think about my day and what sort of things I wanted to do.

‘And while a lot of instances are like this while living in a van, this instance in particular was so therapeutic to me and I think I’ll remember that moment for the rest of my life.’