‘This belly isn’t fat, lazy, or pregnant’: Endometriosis sufferers share photos of their severely bloated stomachs on social media to show others how the condition affects their bodies

Women who are suffering from endometriosis are sharing photos of their bloated stomachs to raise awareness for the little-known symptom of the medical condition  that has been dubbed ‘endo belly.’

Bloating is common during women’s menstrual cycles, but for those who are battling endometriosis, it is more severe and tends to worsen throughout the day — to the point that they look like they’re pregnant.

Dr. Karli Goldstein, who has stage IV endometriosis herself, told Health that patients are often fine in the morning, but their stomachs ‘will get bigger and bigger until the evening, when they can’t button their pants.’ 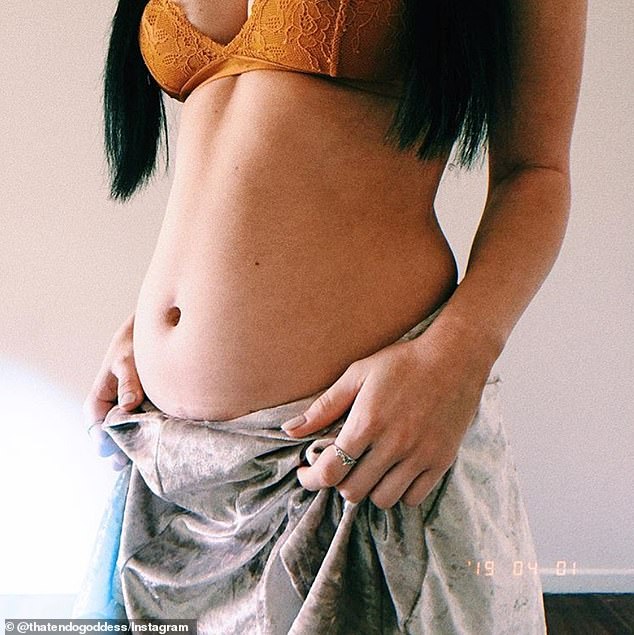 Raising awareness: People who are suffering from endometriosis have been taking to social media to share photos of their bloated stomachs using the hashtag #endobelly 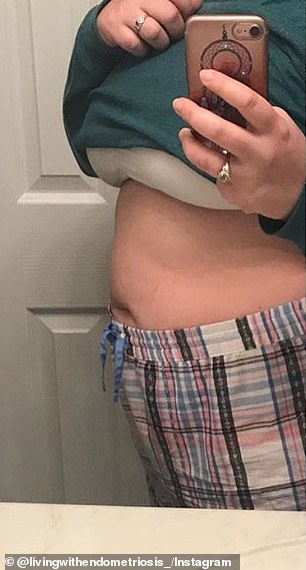 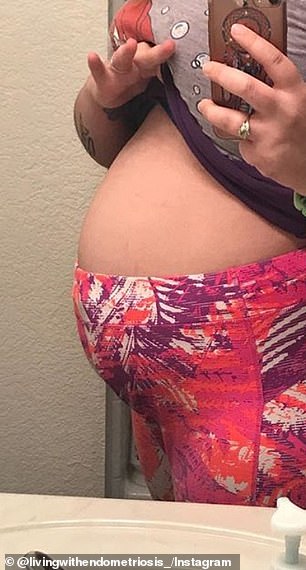 Before and after: Bloating is common during women’s menstrual cycles, but for those who are battling endometriosis, it is more severe and tends to worsen throughout the day

‘You can look six months pregnant by the end of the day,’ she noted.

An estimated one in ten women has endometriosis, a painful condition that occurs when the tissue that normally lines the inside of the uterus grows in other areas of the body, usually the ovaries, fallopian tubes, and the tissue lining the pelvis.

Painful periods, heavy menstrual bleeding, and pain following sexual intercourse are just a few symptoms of endometriosis. Bloating is also associated with the condition, and while it causes sufferers physical and mental anguish, it isn’t as widely known.

People have been taking to social media to share photos of their bloated stomachs using the hashtag #endobelly to show just how tiresome it can be.

An endometriosis sufferer named Kellie Renee shared a photo of her endo belly on Instagram earlier this month, admitting it is ‘pretty depressing looking like you’re pregnant at times’ and ‘even worse when people as if you are.’

‘This belly was flat, toned & pain-free an hour earlier… now it’s rock solid, cramping, difficult to breathe, & expanding by the second,’ she wrote.

‘This belly isn’t fat, lazy, or pregnant (all things I’ve been called at some point in time)… it’s a belly full of organs stuck together & reproductive organs that seem to really enjoy torturing the f**k outta me.’

Emily Koval posted two images of her stomach that were taken just hours apart to show how quickly it can become painfully bloated. She admitted that she dreads being asked, “How far along are you?’ or ‘Do you know what you’re having?’

‘Not something a girl wants to hear, especially when many women who have endometriosis also suffer with infertility,’ she said.

Dr. Goldstein, who is a consulting surgeon and medical advisory board member for the Endometriosis Foundation of America, told Health that it’s unclear what exactly causes such severe bloating in those who have the condition.

‘There have been multiple studies, but there’s no good proof,’ she said. ‘Even though you can see visibly something’s happening, if we do a CT scan, there’s not really a tangible, finite reason it’s happening. It’s very frustrating for patients.’

One theory is that the endometrial tissue growing on other organs causes women to bleed internally around the time of menstruation, prompting their bodies to swell.

Another is that endometriosis is related to gut health and bloating can be a side effect of over-worked intestines. 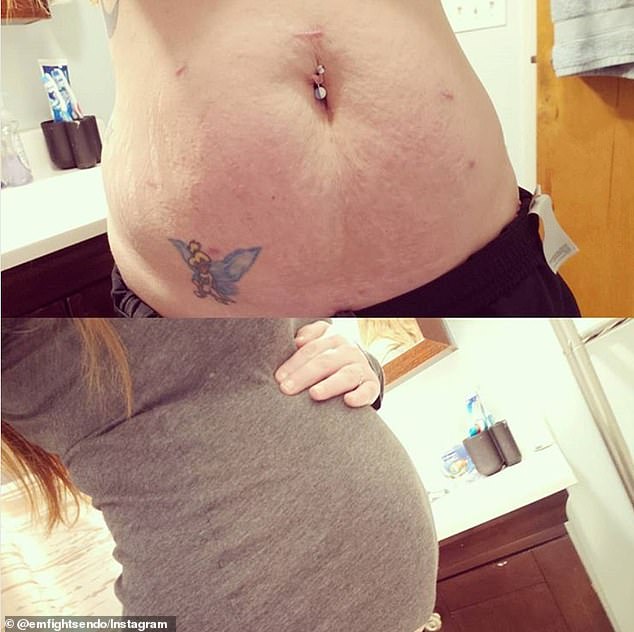 Shocking: Emily Koval posted two images of her stomach that were taken just hours apart to show how quickly it can become painfully bloated 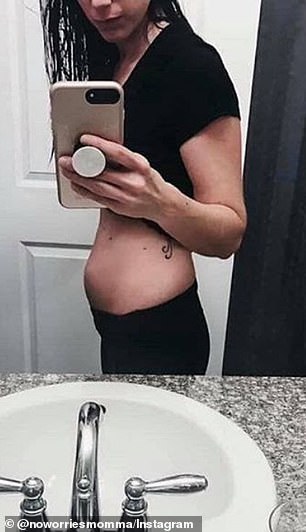 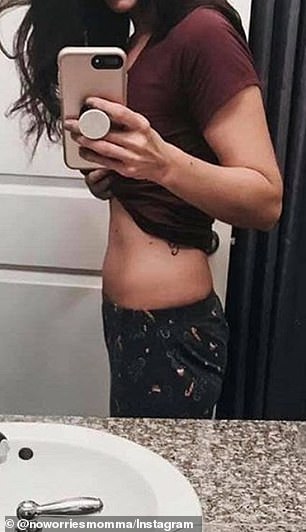 Regimen: A woman named Vicki said these photos of her endo belly were taken just three days apart. She said she relies on a natural supplement for anti-inflammation to manage her bloat

For that reason, some endometriosis sufferers pay close attention to how certain foods affect their bodies and opt to follow anti-inflammatory diets.

Sarah Devens shared on Instagram that she has to ‘eat clean 90 per cent of the time’ to manage her bloating. She has eliminated gluten, dairy, refined sugars, processed foods, caffeine, alcohol, and soy from her diet.

In January, she posted a photo of her stomach before and after eating eggs she didn’t know where made with milk to demonstrate how her stomach swells when she eats the wrong things.

‘It just goes to show that even with all of the effort I make into putting good, anti-inflammatory foods into my body, it is nearly impossible to control everything,’ she wrote.

Sarah also showed how severe her bloating can by sharing a photo of herself during a flare-up alongside a snapshot of herself when she was 20 weeks pregnant — revealing that her stomach is roughly the same size in both images. 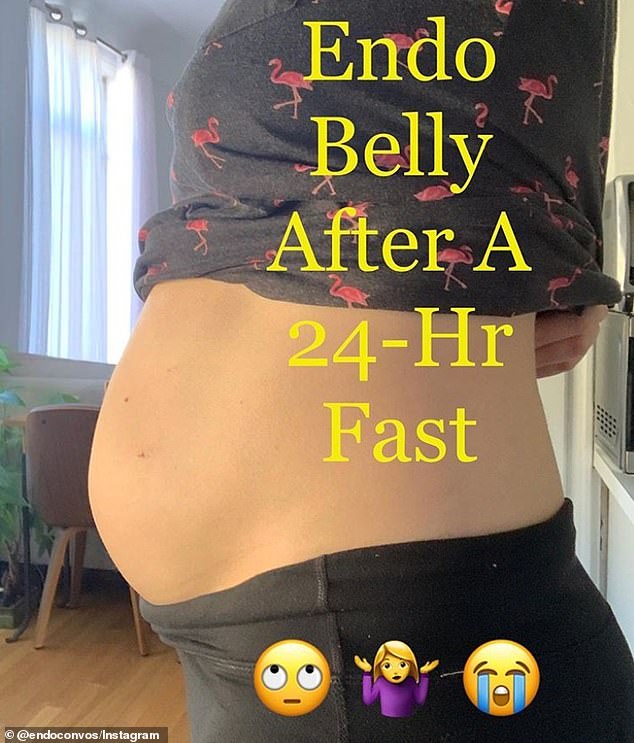 Help: One woman revealed she went on a fast to try and manage her bloating and her stomach swelled even more

However, clean eating doesn’t work for everyone. One woman revealed a fast she tried had the opposite effect while sharing a photo of her bulging belly.

‘Not a pregnancy announcement!’ she wrote. ‘I had a flare a few days ago, so I thought I’d try fasting. It actually made it worse this time! Stumped, frustrated, and looking 30+ wks preggs. At least maybe I’ll get a seat on the train today?!’

It was reported earlier this week that scientists believe they may have found a potential ‘cure’ for the condition.

A team at Washington University School of Medicine has found that the antibiotic metronidazole can reduce the size of lesions caused by the condition in mice with endometriosis.

Scientists are planning a clinical trial to see if metronidazole has the same desired effed in women who have endometriosis.

‘Our initial goal was to understand how these gut bacteria, or microbiota, might be connected to endometriosis, but in the process, we may have found a cost-effective treatment,’ said principal investigator Dr. Ramakrishna Kommagani.